A Strong Impetus for Ministry with Youth 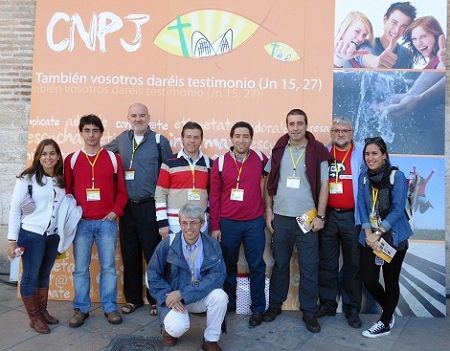 Valencia, Spain. A National Congress of Youth Ministry convoked by the Department of Youth of the Spanish Episcopal Conference took place between the 1st and the 4th of November 2012.

Over 2,300 attendees to the Congress were registered, coming from all of the Spanish dioceses, as well as from various congregations and movements. Among them more than twenty members of the Claretian Family. The participants filled the Cathedral of Valencia, properly decorated for the event, a great venue for the presentations and celebrations of the Congress,

In the mornings, the talks centered on the first announcement and proposal of the Church in light of the educative and emotional emergency facing the youth of today. Through each presentation various resonances were heard which went deeper into these themes, expanding perspectives.

In the afternoons, in eleven churches of the city and in two sessions, more than forty experiences of and ideas for Christian evangelization were presented. Among them, the Claretian Missionary Sisters presented their encounters “CASA” (to help [Conocer] Know, [Amar] Love, [Servir] Serve, and [Alabar] Praise the God of Jesus Christ in a charismatic style), and the Claretian Missionaries presented Vocation Weeks using the materials of the “Claretian Vocational Campaign”, fruit of the common work done between the Claretian provinces of Spain and Portugal over the last five years. Both experiences were well-received and praised by the participants.