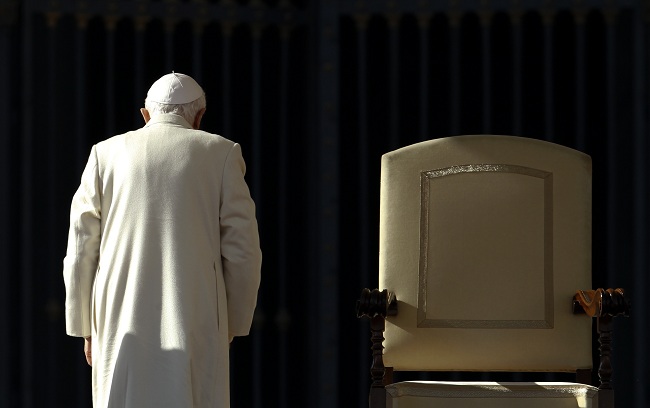 Rome. On February 28th at 8:00pm the renouncement of His Holiness Benedict XVI from the Roman Pontificate began and opened the period of the “vacant chair”.

Having been elected at the conclave of April 19, 2005, and after a pontificate of 7 years, 10 months, and 9 days, Pope Benedict XVI at 5:00pm left the pontifical residence at the Vatican and moved temporarily to the summer residence of the Popes at Castlegandolfo.

The day before, on the 27th of February, he had his final general Audience before 200,000 people coming from all over the world congregating at St. Peter’s Square.

A little before imparting his final apostolic blessing, the Pope pronounced a heartfelt message full of words of faith, confidence, and hope, saying:
(…) “Dear friends! God guides His Church, always sustaining her even and especially in difficult times. Let us never lose this vision of faith, which is the only true vision of the path of the Church and of the world. In our hearts, in the heart of each one of you, may there always be the joyous certainty that the Lord is beside us, that He does not abandon us, that He is near and embraces us with His love. Thank you.”

As we begin this period of the Vacant Chair we are invited to pray ““Pro eligendo Summo Pontifice” and to maintain, as Claretians, our profession “(we profess) love and obedience, even by vow, toward the Church’s Supreme Shepherd…for the good of the entire Body of Christ.” (CMF Constitutions, 6).