Campagn for the Support of the Universal Claretian Mission 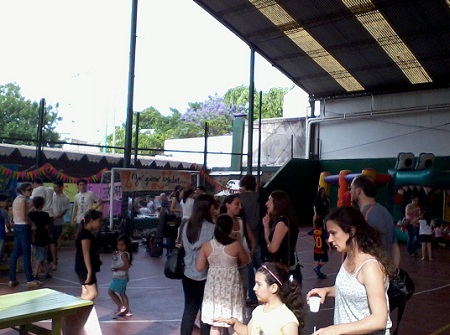 Buenos Aires, Argentina. On Saturday the 17th of November, the Claret Institute of Buenos Aires organized an afternoon of Games and Missionary Solidarity as part of a Campaign of Support for the Universal Claretian Mission.

The event was a time of coming together, recreation, art, and collaboration which concluded with a strong teaching and a collection for the project of Alimentary Security in Ngarema (Kenya) begun in October.

The Pastoral Team carried-out this campaign through various steps:

In the last stage, we held an afternoon of games and ‘missionary solidarity’, which had the diverse participation of students and teachers from the three levels, accompanied by their families.

During the event were carnival games, inflatables, karaoke, and mini table tennis, among others. Participants enjoyed a good buffet and ending with a concert by the “Low Voltage” rock band made-up of students from the school. All proceeds will go to the collection organized by the Procure.

With this event, the school renews its commitment to the Universal Claretian Mission, while at the same time offers economic support and provides greater awareness of the mission within the community.