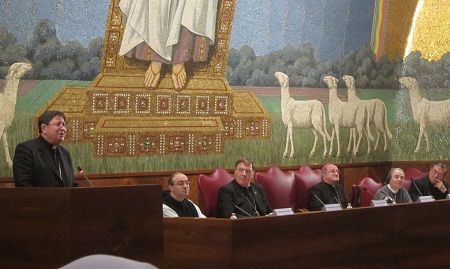 Roma. On Friday March 25th in the great hall “Benedict XVI” of the Lateran University a commemorative ceremony took place celebrating 15 years of the publication of the Apostolic Exhortation “Vita Consecrata”.
This act was organized by the Congregation for the Institutes of Consecrated Life and Societies of Apostolic Life. Moderating the session was Fr. Josu Mirena Alday, CMF, President of the Institute of Consecrated Life “Claretianum” in Rome.

Following the welcome and presentation by the Rector Magnifico of the Pontifical Lateran University, Bishop Enrico dal Covolo, the new Archbishop Prefect of the CIVCSVA, Archbishop João Braz de Aviz, was introduced who made his first public appearance before the religious since his arrival in Rome this past February. The Secretary Archbishop, Archbishop Joseph W. Tobin C.Ss.R., developed the theme on the internationalization of the religious life based on n.51 of the Exhortation. The subsecretaries of the Congregation, M. Enrica Rosanna y P. Sebastiano Paciolla spoke respectively on “creative fidelity” (n. 37 VC) and of the “new forms” of religious life.
Among the 700 religious who attended the ceremony were Fr. General, members of the General Government, and the Claretian Communities of Rome.