Centenary of the Church in Krasnoyarsk 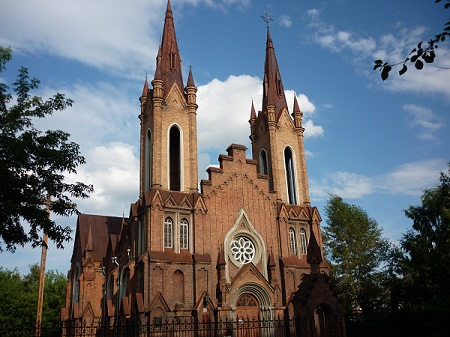 Krasnoyarsk, Siberia. From the 17 – 23rd of October 2011, the Catholic Parish of The Transfiguration of the Lord in Krasnoyarsk (Siberia, Russian Federation) celebrate its 100 years as a church. The parish is currently entrusted to the Claretian Missionaries.

The Church was built in 1911 under the direction of the Polish architect, Vladimir Sokolovski, and thanks to donations collected from all corners of the then Russian Empire.

With the arrival of the Soviet Regime the church was nationalized. It was used a theatre, and later as a concert hall for organ of the Krasnoyarsk Philharmonic. At the beginning of the 90’s, after an absence of many years, the first Catholic priests appeared. The faithful were permitted to use the church, although it simultaneously functioned as a concert hall for organ.

After 20 years, and numerous petitions made to the authorities on various levels, the historic church building has still not been returned to the faithful. Without hiding their great expectations, the parishioners received the Governor of the region of Krasnoyarsk, Lev Kuznesov, who came on October 22nd to congratulate the Catholics on the occasion of their jubilee celebration. During his greeting, the governor pledged to return the Church building to the faithful. In response, the Church, filled to overflowing, exploded in applause.

Many events were held during the week’s festivities.

The parishioners organized an exposition of the artistic works of Krasnoyarsk, entitled: Path to the Church”.

Representatives of other Christian faiths congratulated the Catholics with a concert of Christian music.

“Afternoon of mercy” gathered together, under the vaults of the temple, those who cannot come to Church with great frequency on their own because of illness or old age.

The culmination of the Jubilee Week was the celebration of the Sunday Mass, presided over by the Papal Nuncio from Moscow, Bishop Ivan Yurkevich, and the Bishop of the Diocese of St. Joseph in Irkutsk, Kirill Klimowicz, and concelebrated by 16 other priests, among them Fr. Paul Smyth, CMF, Vicar General of the Claretian Missionaries.

Of particular significance for all the Catholics in Krasnoyarsk, during this week, was the meeting of the representatives of the Catholic hierarchy in Russia (the Nuncio and the bishop of Irkutsk) with the newly appointed Orthodox Metropolitan of Krasnoyarsk and Achinsk, Pantelemon; the first in many years, because of the renaissance of the Catholic parishes in Russia.