Claretians at the Synod of Bishops 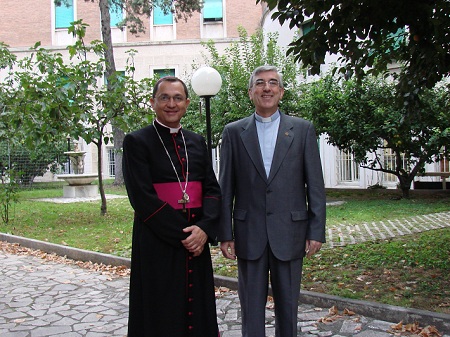 Rome. With a solemn eucharistic celebration on Sunday, October 7 in St. Peter’s Square, Pope Benedict XVI inaugurated the XIII Ordinary General Assembly of Bishops which will conclude on the 28th.

The theme of the Assembly revolves around the theme “The New Evangelization for the Transmission of the Christian Faith”.

Among the “Synodal Fathers”, the experts, the listeners, and the invited from other Christian churches, were Mons. Juan José Pineda Fasquelle, CMF, Auxiliary Bishop of Tegucigalpa, representing the Episcopal Conference of Bishops of Honduras and Fr. Josep Ma. Abella, CMF, our Superior General, elected as one of the representatives of the Union of Superior Generals (both in the photo).

The synodal works began on Monday the 8th with their first general congregation. After the liturgy of the hours, Pope Benedict gave a meditation in which, among other important concepts mentioned, he said: “The faith needs to be converted into a call of love in which the Christian inflames his neighbor. Only in lightning the flame of love will evangelization become real”.