Encounter of the Congregation’s Prefects of Formation 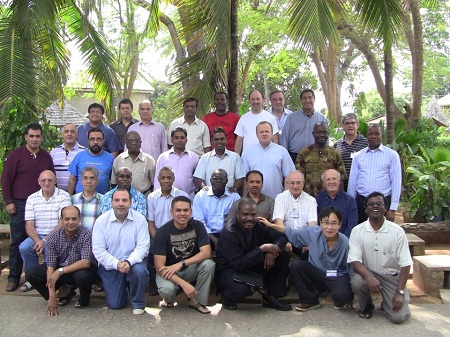 Dar Es Salaam, Tanzania.From the 10th to the 20th of August, in Dar Es Salaam, Tanzania, the Prefects of Formation for the Congregation met. Thirty participated with the exception of England, France, and Euskelherria. Although, initially, the Prefects of Formation were invited to learn English and Spanish in order to facilitate communication, the meeting provided simultaneous translation in both languages at the hands of Fathers Basker Amalraj, José Sánchez, and Malachy.

The multicultural composition of the participants was very evident at this encounter whose participants represented 17 nationalities.

The reflection of the encounter centered on the theme “Towards a transforming formation”. It was clear for the participants that the long years of our initial formation are necessary to orient a transformation in the formandi towards a configuration with Christ the Evangelizer. The meeting took on five fundamental dimensions of our consecrated life. Claretian identity in a missionary consecration, apostolic poverty, consecrated celibacy, obedience, and community life. The call of the last General Chapter to promote the interiorization of the fundamental values of consecrated life, to deepen the accompaniment of the formandi, and the preparation of formators, traversed through the various themes.

The Encounter focused on adult education (androgony) proposed by Paul Smyth, Vicar General, although he was unable to attend for reasons of health. The different themes were enriched by the contributions of the participants in individual and group sharing. The Prefects opted for a necessary change in formation: to move from mere conceptual learning to transformative learning, implying that philosophical and theological education is integrated into the Claretian lifestyle. The Encounter came to some conclusions which will serve as a guide to animate the mission of formation in the respective Organisms.

On August 17th the Bishop of Dar Es Salaam, Cardinal Polycarp Pengo, celebrated the Eucharist with the participants. During his homily he made some important points about formation in the African context. On the same day the participants visited three Non-Governmental Organizations in the city of Dar Es Salaam who work with the marginated, especially children and women. On Sunday the 19th of August they went to the Claretian parish in Kimara to concelebrate at the solemn Eucharist marvelously prepared by the community, together with a cultural fiesta and meal offered by the people. It was a very emotional event to participate in the liturgy and African cultural. The Claretians of Tanzania, coordinated by the Superior of the mission, Fr. Basker Amalraj, organized everything in a very excellent way leaving all the formators with a happy memory.