Stephen Sala y Masnou was born May 28, 1812, in a farmhouse in the parish of San Martin de Sescors, Barcelona. His widowed father had three children by his first wife and three by his second. Esteban, was born of the latter and was the fifth of the six children, of whom three became religious, a Claretian and two Benedictines. One of Stephen’s brothers was Fr. Bernardo, who was forced to leave his monastery during the period of secularization in Spain and was a member of the Congregation for 26 years, until he returned to the monastery of Montserrat in 1875. 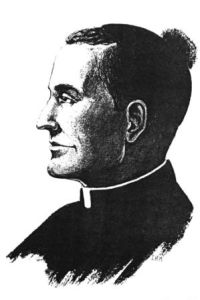 On March 1, 1843, at age 34, Fr. Claret be visiting the entire region of Catalonia. He also chose a lifestyle of extreme poverty, rising at 4:00 am, traveling on foot, where he would attracted huge crowds and with his simple and penetrating style of preaching brought about many conversions. In July, 1843, impressed with Claret’s zeal, members of the clergy invited him to preach a retreat to priests. That led to his preaching a second retreat, during which he made the acquaintance of Fr. Stephen Sala.

Sala was profoundly affected and resolved to abandon a promising ecclesiastical career, in order to dedicate himself solely to preaching missions. A gifted sacred orator, Sala preached throughout Catalonia and accompanied Claret on several apostolic campaigns.

Fr. Stephen Sala died in Barcelona on April 18, 1858, at 45 years ofage. He was Claret’s earliest colleague in founding the Congregation. When Claret left for Cuba, the fledgling community was left in Sala’s hands, who served for ten years as SuperiorGeneralandkept alive the Founder’s missionary spirit.

Stephen felt the call of the Lord for the first time, when as a child he went fishing. The Lord seemed to tell him to dedicate himself to catching souls and Stephen was deeply affected. At age eleven, he began studying Latin and rhetoric and in 1828 began the study of philosophy at the seminary in Vic. Three years later, Sala went on to study Theology at the University of Cervera, where he distinguished himself for his brilliant intellect. In 1834, his degree in hand, Sala was appointed substitute teacher of Theology, while he continued his own studies.

Meanwhile, Spain was in political upheaval. Anticlerical laws prohibited the ordination of priests, and Stephen had to wait September, 1839, to be ordained by the Bishop of Solsona.

In October 1840, Sala was assigned Vicar of the parish of Villa de Vallfogona and teacher of primary education and Latin, an enviable assignment, if for no other reasons that it paid well. In 1842, he was awarded a benefice as a canon of the Cathedral of Vic. Sala’s star was on the rise.

Returning from the Canary Islands in 1849, Claret set about founding a congregation of missionaries. One of the first Claret invited on board was Fr. Stephen Sala, with whom he had worked and whom he considered animated by the same missionary spirit, and on July 16, Sala was among those undertaking a great work and prepared for a year of missionary formation under the aegis of the Founder.

Claret’s appointment as Archbishop of Santiago, Cuba came as a blow to the fledgling community. Fr. Claret chose Fr. Sala to accompany him in discerning his response. To no one’s surprise, Sala was elected to replace the Founder as director of the community. Throughout Catalonia,

Sala was regarded as heir to Claret.

Sala devoted himself to preaching retreats to priests, religious and laity, and to popular missions. Many sought him out at La Merced in Vic.

In 1851, Sala assumed direction of the Carmelite Sisters of Charity of Vic, and guided them through a difficult spell. He resigned his position, however, in June, 1854, when the community began to demand too much of him.

Sala also distinguished himself for his concern for younger people. Worried that, after participating in a mission, youth and young adults lacked the resources and support to persevere in a better Christian life, Sala began to organize them into choirs. He wrote two works promoting this project.

A Superior Who Unites the First Community

Many expected the Congregation to expand quickly under Sala’s leadership, yet when he died after ten years in office, there were only fifteen members, all living at La Merced in Vic. In all fairness, Sala shouldered a more than daunting task, when he took over leadership from Claret so soon after the founding of the community. His biographer writes: “Without the holiness, prestige, kindness and gentleness of the first Superior [Claret], it was all but certain that those engaged in such an undertaking as an Institute of missionaries bonded only by mutual charity and friendship, would each go his own way like salt on water.” After Claret’s departure for Cuba, Sala’s extraordinary talents were the golden chains binding the community, the four remaining co-founders and the several missionaries, who entered the Congregation during the years of his government, and remained faithful” (1, pp. 105-106).

When Claret was appointed confessor to Queen Isabel II, Claret nominated Sala as the most suited to succeed him. Sala received notice of his election while in Barcelona to open the mission house of Gracia, a retreat center for clergy. He soon fell ill and died on April 1, 1858.

Father Joseph Xifré, who succeeded Sala as Superior General, described him in this way: “… he [Sala] exhibited exceptional physical and moral qualities…Handsome and of medium height, he spoke clearly with good enunciation. He was well educated, cultured and of a balanced moral perspective, known for his modesty, blameless in every respect, meek and humble of heart, zealous, chaste and pure of heart, who died without having lost his baptismal innocence. [Sala] distinguished himself at the University of Cervera and was regarded as the most outstanding orator in the Principality of Catalonia. He preached several successful missions and spiritual exercises to clergy, religious communities and students. He died of scarlet fever and a stroke, as saintly as he had lived … “(4, pp. 192-193).

A Brother We Remember Even Today

Fr. Stephen Sala continues to call us, as missionaries, to conversion. He exhorts us not to lie stagnant, but to remain open to the surprises of God. We are men who share the missionary spirit of Claret. Our success lies not in numbers or results but in our commitment to the mission.