Catherine was born on March 25, 1347. We know details of her life thanks to her confessor Raymond of Capua, who became General Superior of the Order of Preachers. As a child, Catherine was inspired to embrace virginity and at seventeen, in spite of opposition, she entered the Sisters of Penance of St. Dominic. Along with her religious sisters, Catherine attended in a remarkable manner to the spiritual and charitable needs of the sick and poor. She experienced many struggles and temptations, but remained steadfast thanks to her intense spiritual life. 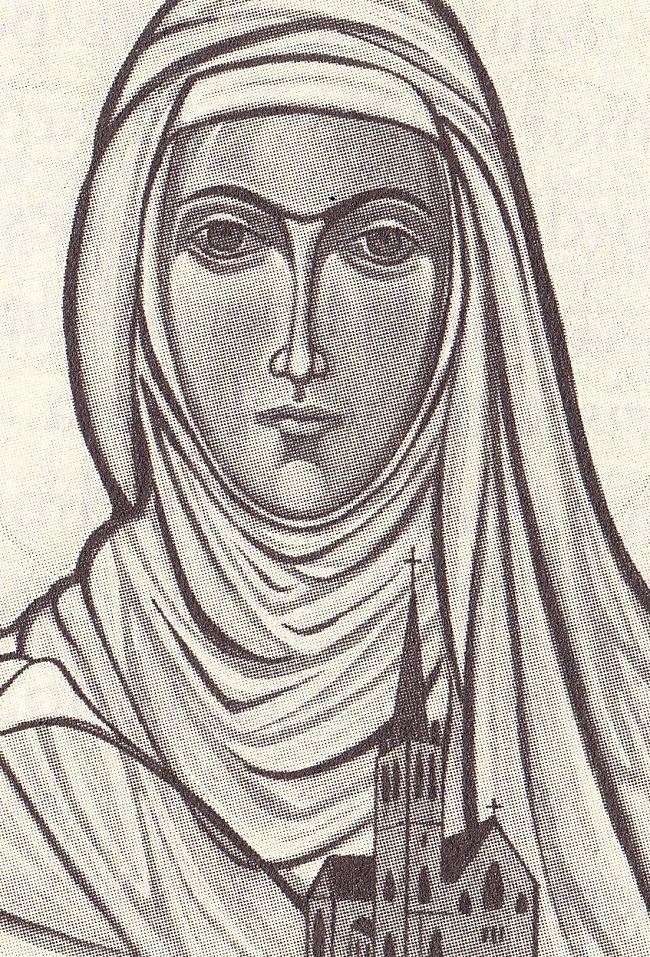 In no time, all classes of people began flocking to Catherine. She became and remained the spiritual mother of many. In spite of her frailty, Catherine continued her intensive apostolic activity, and even came to represent the Church’s political and diplomatic interests. In 1376, after sending several letters to Pope Gregory XI residing in Avignon, Catherine set out to meet with the pope in person. She convinced Gregory to return to Rome. Granted Catherine possessed a strong personality, which enabled her to broker peace between cities and to defend the rights of the pope, without her love of God, neighbor and the Church, and an extraordinarily intense spiritual life, she would have collapsed under the immense burden.

Catherine died at 33 years of age on April 29, 1380, and is buried in the Basilica of Santa Maria Sopra Minerva in Rome. Canonized by Pope Pius II in 1461.

Even in his youth, our Founder had a deep devotion to St. Catherine of Siena as a secular religious, and for her extraordinary mysticism, love for the Church and the pope, and outreach to sinners. Claret mentions her several times in his Autobiography and his personal library contains several volumes on her life and works. He chose Catherine as a co-patron of the Congregation.

Born in Siena (Italy) on March 25, 1347, when the feast of the Annunciation and Palm Sunday happened to fall on the same day, this remarkable woman and her twin sister Giovanna were preceded by twenty-two brothers and followed by another. From her father, a fur dyer, Catherine inherited a warm heart, compassion, and exceptional sweetness, and from her mother energy, industriousness, firmness and decisiveness.

At five or six years of age, Catherine had a vision, which left an indelible mark on her. From then on, Catherine states she ceased to be a child. She began to emulate those who surrendered their lives completely to God and resolved to remain a virgin.

In spite of her family’s opposition, at only seventeen years of age Catherine was accepted by the Sisters of Penance of the Third Order of St. Dominic. As a mantellate, she wore a black cloak over a white tunic girt with a belt. Living in her family’s home under the aegis of a Dominican friar, she devoted herself to an extraordinary degree to the spiritual and physical needs of the sick and poor.

During those nearly four years in solitude, Catherine was blessed with remarkable mystical experiences, and harrowing temptations as well, which she overcame thanks to her personal relationship with Jesus Christ, the Virgin Mary and the saints.

Catherine’s confessor, Tomás de la Fuente, allowed her to serve as spiritual director to the clergy, nobility and common people. Though young and prone to sickness, Catherine also represented the Church’s political and diplomatic interests without ever neglecting her interior life. To the day of her death, she experienced her being called simultaneously to intense contemplation as well as intense activity as one calling, although the two often seemed to be in conflict and made her life difficult.

In 1374, Catherine took as her confessor and spiritual director Raimondo di Capua, who shortly after Catherine’s death was elected Master General of the Dominican Order. She became both his client and teacher, and Raymond has provided us with an abundance of detail regarding Catherine’s life, graces, virtues and mystical experiences.

Driven by her insatiable desire to serve the Church, Catherine agreed to negotiate on behalf of city of Florence, which was under interdict because of its opposition to the pope. In 1376, convinced that she must promote the reform of religious customs among the clergy, religious and faithful, Catherine undertook her famous journey to the papal court of Avignon and convinced the weak and hesitant young pope, only twenty-nine years old, to return to Rome. Catherine was convinced that the pope’s return to Rome would serve to resolve the bitter struggles among the small Italian republics beholden to the Holy See.

By 1830, Catherine was declining steadily. “If I die,” she wrote, “know that I die of passion for the Church.” “Around 9:00 am, when I go to Mass,” she wrote in emotional letter to her director, “you will see a dying woman walking in the footsteps of Peter, ready to continue laboring in the bark of the Church. I am there until about vespers. Day or night, I do not want to leave until this people is submissive and obedient to their Father, the Pope.” Kneeling there in an ecstasy of interior suffering and prayer, Catherine bore the weight of the bark of the Church, which she believed God had placed on her fragile shoulders. “Catherine,” one of her followers wrote, “was like a mule, meekly bearing the weight of the Church’s sins, just as in her youth she had carried on her shoulders heavy sacks of wheat.”

Exhausted from disease and pain, in the company of many of her followers, Catherine, died on April 29, 1380, at only thirty-three years of age. Her face radiant, she bowed her head and gave up her spirit in the words of Jesus: “Into your hands I commend my spirit.” She was buried in Rome in the Basilica of Santa Maria Sopra Minerva, where her body remains under the altar, while her head is in the Church of San Domenico in Siena. She was canonized by Pope Pius II in 1461.

St. Catherine is one of three female doctors of the Church, along with St. Teresa of Jesus and St. Theresa of the Child Jesus, although she never had a formal academic education.

Even as a youth, our Founder professed a deep devotion to St. Catherine of Siena as a consecrated lay woman distinguished for her mysticism, her love for the Church and her apostolic commitment on behalf of sinners.

As a missionary impelled by compassion for sinners, Claret made his own the prayer of St. Catherine of Siena: “Lord, let me stand at the gates of hell and stop anyone from entering, by asking each of them: ‘Where are you going, poor fool? Turn back! Make a good confession and save your soul. Don’t come here, to be lost for all eternity!’”(Aut 212).

Claret saw a steady pattern in the lives of all the saints, “who spent their lives working for the salvation of souls” (Aut 235) but Catherine left a distinct impression for her ability to integrate the active and contemplative lives in her unique ministry of the Word. “Gregory XI commanded Catherine to preach before him and the entire papal court, and she spoke so masterfully of heavenly things that her audience remained as motionless as statues. She preached before His Holiness and the cardinals on many occasions and they always listened admiringly and profitably, venerating her as a new apostle, powerful both in words and works. She also preached to the laity, and as her own heart burned with the fire of holy zeal, her words broke out in flames, and so many sinners repented and changed their lives that she had to keep a number of confessors in her retinue, some of them with papal authority to absolve reserved cases”(Aut 238).

In a letter to Sister Mary Dolores on October 30, 1843, Claret wrote: “I send you the life of Saint Catherine of Siena, who is my teacher and directress, because it warms and guides me greatly. When I read her life, I must have one hand on the book and in the other a handkerchief to wipe the tears that continually make me weep.” Claret imitated Catherine’s maintenance of the inner cell, which allowed them to experience God’s presence and intimacy, even in the busiest of circumstances. He spells this out in Temple and palace of God our Lord. Claret chose Catherine as a co-patron of the Congregation of Missionaries.