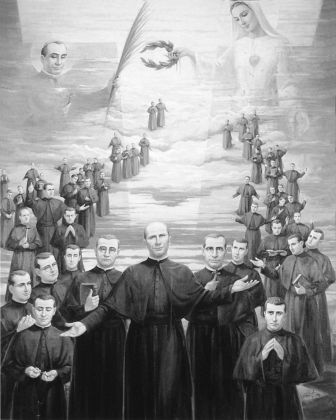 On Monday July 20, 1936, the Claretian seminary was assaulted by revolutionary militia in search of weapons but none were found. Nonetheless, the entire community was arrested. The Superior, Father Felipe de Jesús Munárriz, the Prefect of seminarians Father Juan Díaz, and the administrator Father Leoncio Pérez were taken to the municipal jail. The elderly and sick were transferred to a hospital, and the rest taken to the auditorium of the school of the Piarist Fathers.

In jail the missionaries prepared themselves for execution. One wrote that they spent the days in religious silence, and when they did speak, it was to encourage one another to die as martyrs. Yet there was the holy murmur of prayer, particularly prayer for the forgiveness of their jailers. “Save them, Lord, for they do not know what they are doing!” They also prayed the Liturgy of the Hours and the rosary. For the first few days, the young missionaries clandestinely received communion, the center of their lives and their source of strength.

It was midsummer and water was rationed stingily.The jailers brought in prostitutes, threatening the missionaries with death, if they disrespected the prostitutes, but no one succumbed. There were mock executions, and the prisoners never knew when their jailers might go off. Several prisoners were offered release, but none was willing to abandon his companions, with whom he was resolved to be martyred.

One of the missionaries wrote to his family: «The Lord has deigned to entrust to me the palm of martyrdom. As you read this letter, thank to the Lord for such a momentous gift such as martyrdom, which the Lord has entrusted to me. I wouldn’t trade being imprisoned for the gift of performing miracles, nor martyrdom for the apostolate that was my life’s dream.”

Other seminarians wrote: “With my heart full of holy joy, I hope that martyrdom will be the crowning moment of my life.” “As Jesus Christ died on the cross forgiving his enemies, as a martyr I will forgive my enemies with all my heart.” “We are happy to die for Christ and his church and for the faith of Spain.” “Don’t weep for me. Jesus asks me to shed my blood, and for love of him I will do so. I will be a martyr and go to heaven.” These are a few of the testimonies written on scraps of paper, candy wrappers, the walls, a piano stool and miraculously preserved.

During their brief imprisonment, Frs. Munárriz, Díaz and Pérez were exemplary, never complaining, encouraging their fellow prisoners, and praying intensely for themselves and their persecutors. They heard confessions and confessed to other prisoners. At dawn of August 2, without even a pretext of a hearing, simply for the being members of a religious community, they were executed at the entrance to the local cemetery.

In the early hours of August 12, the executioners called out Frs. Sebastián Calvo, Pedro Cunill, José Pavón, Nicasio Sierra, the student Wenceslao María Claris and Br. Gregorio Chirivás, the six eldest of the community. None resisted. Their hands behind their backs, and tied together two by two, side by side, Fr. Secundino María, from the stage of the auditorium, absolved the condemned of their sins. At 3:53 am, those in the auditorium heard gunshots. At the last moment, the militia had offered the prisoners the opportunity to deny their faith, but the missionaries stood firm to the very end.

Between August 2 and 18, fifty-one members of the Claretian community of Barbastro went to their deaths. The nine whose lives were spared were elderly or infirmed, and two Argentinan students, who were released and sent back to their country, after spending three weeks in prison with their peers.

A Farewell Letter to the Congregation:

When the time comes for our jailers to call out the next victims, we all feel a holy serenity and an eagerness to hear our own names among to join the ranks of the chosen. We have longed for this moment with generous impatience, and watched our companions kiss the ropes that bound them and speak words of forgiveness to the armed mob. As the truck heads for the cemetery, our brothers shout, ‘Long live Christ the King!’ The angry mob shouts back, “Away with him…Death! – But nothing intimidates our brothers. They are your sons, beloved Congregation, these young men threatened with pistols and rifles, who on the way to the cemetery continue to shout with calm courage, “Long live Christ the King!”’

“Tomorrow, the rest of us will go, and we are determined to shout, even as shots are fired: “To the Heart of our Mother! To Christ the King! To the Catholic Church! To you, our Congregation and our motherl!” My companions have told me to lead the gritos and they will answer. I will shout at the top of my lungs, and our cries will show you, beloved Congregation, how much we love you and remember you, in spite of our pain in the face of death.’

We all die happy with no regrets or misgivings. We all die praying to God that our blood not be shed in vengeance, but that it will be transfused and stimulate your growth and expansion throughout the world.

Farewell, beloved Congregation! Your sons, the martyrs of Barbastrogreet youfrom prisonand offer on your behalf our anguishin expiation of our failings and in testimony ofour faithful, generous and everlastinglove.

Tomorrow, on the eve of the Assumption, we will die because we wear the cassock – the anniversary of the very day, on which we first received it.

The Martyrs of Barbastro greet you, as do I, the last and most unworthy, Faustino Pérez, C.M.F.

The missionaries’ heroism was attested to by all who observed the events preceding their martyrdom. Before their arrest, they had been taught to show preference in their ministries to the poor and the working classes, and a number looked forward to serving in the Claretian missions in China. Indeed, impelled by the same apostolic spirit that had animated their Founder St. Anthony Mary Claret, they regarded their martyrdom as the quintessential fulfillment of their missionary vocation. The Claretian Martyrs of Barbastro were beatified by St. Pope John Paul II on October 25, 1992.