Fernando Saperas was born in Alió, a small farming town near Tarragona (Spain) on September 8, 1905. His father died when Fernando was just seven years old, leaving his mother and two siblings in dire straits and Fernando to fend for himself. Fernando attended school and worked on a farm until he was 15 years old, when he went to Valls, then to Barcelona, where he worked as a waiter and salesman. 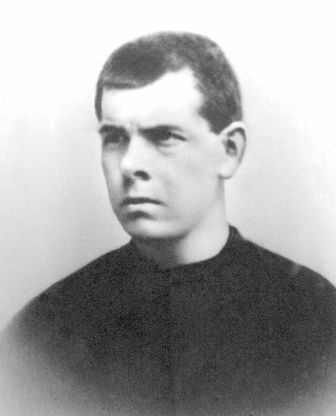 As a young adult, Saperas was slim, robust, energetic and hardworking, as well as intelligent and self-assured, yet deferential and perhaps, too formal and quiet. From the time he was a child he exhibited an exceptional religious sensibility.

Saperas completed his military service in Barcelona, near the Shrine of the Heart of Mary, administered by the Claretian Missionaries, where he attended services whenever his military obligations allowed. It was during this time that he first felt led to join a religious community, if not as a candidate for the priesthood, considering his age, then as a co-adjutor brother. He approached Father Antonio Soteras, Provincial Superior of the province of Catalonia, who received him into the Congregation as a missionary brother in late 1928.

Upon completing his years of formation, Saperas was assigned to Cervera, where he continued to mature in the piety, with which he had been gifted as a child. In addition to participating in the Eucharist and community prayers, he made frequent visits to the Blessed Sacrament, prayed the Stations of the Cross and the fifteen decades of the rosary. Brother Saperas had a profound love for his vocation and the Congregation. “Never” –he used to say – “can we give God sufficient thanks for the grace of our vocation.” However, the most impressive feature of his spirituality was his work ethic and the missionary zeal and discipline with which he carried out his daily tasks.

On July 21, 1936, informed that the city of Cervera could not guarantee their safety, the one hundred and seventeen Claretians in Cervera took flight, seeking refuge wherever they might find it. The majority, including Saperas, headed for Solsona, but halfway there were told they would not be allowed in the city and they went their separate ways. Brother Saperas was eventually welcomed in the village of Montpalau, Lleida, by the owner of a tobacco shop and tavern. Saperas worked for his host and felt at home with his family.

On the other hand, he was constantly rankled by the raucous and, at times, blasphemous atmosphere of the tavern. Besides, a tavern was not the best of places to hide. So, Brother Saperas was asked to find another place. Fortunately, he knew how to make a living and not be a burden to others. Early on August 12, Saperas sought out another friend, a farmer, in the Cervera area. Unfortunately, the Revolutionary Committee of Cervera had ordered the farm to be searched for a stolen mare and her two calf’s. Arriving at the farm, Saperas was accosted by militia, who doubted his explanation for being on the road and arrested him.

While being transported, Saperas admitted to being a religious. His captors stopped the car, stripped him of his belongings, and were about to kill him then and there, only to renege, when one in the party reminded them that their assignment was to find the livestock.

Everyone got back in the car and continued on. In no time, conversation turned from the ordinary to sex, the militants needling Saperas about his relations with nuns and homosexuals. Saperas protested: “Kill me if you want as soon as possible, but don’t talk about such things.” The car stopped. Several of Saperas’ captors jumped in the backseat of the car. One stripped Saperas naked, two others pinned him down, and another jumped on him.

Saperas pleaded: “Kill me but don’t do that to me!”

Instead, the militants took Saperas to several houses of prostitution in Cervera, telling him that if he had sex in their presence, his life would be spared. “He does nothing. He’s colder than ice. These people are useless,” one of the captors sneered.

As a last resort, the militants took Saperas to Tarrega, Lleida, a city about 12 kilometers Cervera. Witnesses attest that Saperas was forced to drink and dance in his underwear with several naked women.

Someone sneered that Saperas was not a man. He responded: “I am not a man? I would outdo you by far, if I wished, but I do not wish to. I’d rather die!” The women ceased to cooperate and told the militants either to take him away, because he was a religious, or they would leave. Grabbing empty bottles and chairs, the militants drove the woman out of the bar.

Around midnight, after nearly fifteen hours in custody, Saperas was thrown into a car to be taken to the cemetery and executed. On the way, several of his captors had to be dissuaded from cutting off his genitals. He was shot near the gate of the cemetery, forgiving his murderers and echando gritos in honor of Christ the King. Despite a torrent of bullets, Saperas did not die instantly and, in his agony, repeated: “Mother! Mother!” A man dared approach and say, “Hey Friend!” Saperas did not answer.

On the spot where he was martyred is a marker similar to the one over his grave. “For defending his religious chastity Brother Fernando Saperas, Missionary Son of the Heart of Mary, was martyred on 13-VIII-1936. “