When Fr. AnthonyMaryClaret founded the Congregation ofSons of the Heartof Mary, he intended coadjutor brothers to enjoy the same status as priests, while devoting themselves to the domestic needs of the community.

In 1880, a year after his Profession of Vows as a coadjutor brother, he was assigned to the sixth ban of Claretian Missionaries to go to Chile, where he spent a short time in Curicó before being assigned to Santiago. He would serve in this community for forty-seven years. 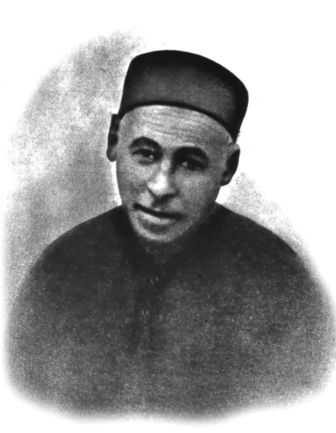 To this day, Claretians continue to pass on stories of how Br. Peter exercised his role as doorkeeper for all those years.

A man of few words, he was kind and modest, of unaffected demeanor, zealous yet recollected and devoted topenance. During his years as doorkeeper, more marriageswere validated as a result of his solicitude than throughout theArchdiocese ofSantiago.

Even though the brothers at this time would not exercise ministerial functions, they were to be considered religious missionaries in every sense of the word. Besides one always saw that they helped significantly in the life and mission of the Congregation.

Among the coadjutor brothers, one that is distinguished by his singular life in the Claretian province of Chile, happened from 1880 to 1927: Brother Pedro Marcer Cuscó. Sometimes his name appears as Marcer or Marcé, Cuscó or Coscó, according to different catalogues. We will use Marcer and Cuscó.

In Avinyonet del Penedes, a town in the province and diocese of Barcelona, ​​Pedro Marcer Nicolau, who was born in this town and Rosa Cuscó Salas, a native of Les Gunyoles, Barcelona were married. It was a responsible Christian marriage, of unblemished faith and great divine love, stoked with permanent religious practices, abundant care for Most Holy Mary. They had five children; our brother Pedro was the second and was born on October 1, 1854. He was baptized the next day in the parish of St. Peter Avinyonet, receiving the name of Pedro Jose Antonio. Thanks to a Christian family formation, Pedro was inclined to learn more of the faith: he was an altar boy and a member of the church choir, at times as cantor. He later attributed his vocation to his teaching and permission from his parents. The school he attended helped him to learn and frequently read spiritual books about the world. He also had the opportunity to listen to the words and example of some neighbors who entered the Congregation as coadjutor brothers and this incited him as well. It took him a while to clarify his desire because he had to wait out his time in the military service before entering the community.

Once things were arranged, he came to the community of Gracia, Barcelona, where it was the Novitiate of the missionaries. After this trial year, he went to Vic to join the Congregation by means of his Religious Profession, which was received by Fr. Jaime Clotet, co-founder of the Congregation, on July 16, 1879. Now that he was professed, this allowed him to keep all the fervor of his profession and to be faithful to the work entrusted to the community. A little later came the mandate of the Superiors to move to the Claretian Mission of Chile, as they had already done with other Claretians, priests and brothers. This would totally change the panorama of his life. He was incorporated into the sixth expedition of missionaries of the Heart of Mary destined to Chile.

On June 1, 1880, he reached his destination. Bro. Pedro Marcer finally arrived at his home. He spent 47 years in the convent of Bethlehem, as was the suburb and chapel where the first missionaries arrived in 1870. He was promptly named Porter of the house where for more than 40 years he faithfully served with brief interruptions, as when a few months he had to go to Curicó to substitute for someone. In many years serving the Porter of the religious house, we can look at two aspects which distinguish him: the peculiarities of the fulfillment of his office, although exercised by many other brothers, he was different in some way; and what the other brothers did not perform in their responsibilities with various actions.

There are many who testify to the good performance of Bro. Pedro as Porter for the community. To better fulfill his mission, he had written some rules to abide by, trying to translate them into practical criteria in the spirit of the Constitution which Fr. Founder drew for the Porter’s responsibilities. At the same time, he sought help in other areas: sweeping the main door and courtyards, taking care of the gardens, cleaning the furniture, watering the garden, pick up the mail at the Post Office, setting the clock tower.

Doing one thing at a time was his way of proceeding, not only for his patience and prudence but also because of the appearances of holiness that his Superiors and colleagues observed. Indeed, Br. Pedro particularly distinguished for his humility, born of the knowledge of his own miseries, imperfections and faults. This moved him to a deeper and healthy penitential spirit, which he repeated as one of the most beautiful reasons to remain in the Congregation was to fight his sins and attain salvation. Graphically he wanted to resemble or be like the broom, worn and cleaning. Along with this penitent humility was a striking spirit of faith, rooted in his upbringing and supported with the thought of eternity, both concerned from childhood like that which Father Founder expressed, which led him to hold in trust and fear of God. These were supernatural reasons which he kept.

He developed an intense spirit of prayer. Not only the prayer of the community, which he fulfilled faithfully and carefully from the very beginning, but also his personal prayer, also abundant as shown by his spiritual writings. There are witnesses who confirm how he used his free time well. All this was nurtured by the Eucharist and the Sacrament of reconciliation, which he participated frequently, thought it was not a usual requirement in those years. In his spirituality, he did not miss devotion to the Virgin, manifested in the frequent recitation of the Rosary. He took his time in making rosaries with wire and beads. As a light that illuminated, everything reflected his love for the Congregation, his vocation, the Constitutions and to the requirements arising from the life and mission. If it’s love, he grew in his love of God and souls.

The apostolate writings of Br. Pedro is somewhat striking. Possibly his has been unparalleled in this evangelizing process among the brothers of our Congregation. There are at least 38 letters written by Br. Pedro about himself and known reference date and others. One should bearing in mind the circumstances of time and place: it was not the custom in those years of 1800 and early 1900, and it was coming from the distant lands of the Claretian province of Chile. There were those who read and transcribed them, at least in part. Most of them is addressed to his family: his parents, his brother Joseph, his nephews, his niece Angela who was a Religious. There is one letter which is sent to Father Joseph Fogued, Prefect of Students in Cervera and later the Apostolic Vicar of Tunki in China. The same Br. Pedro says that he was a little fond of writing letters. We know that they are spontaneous and not forced; included are other spiritual writings. They were recurring themes: the Christian life, eternal salvation, God’s love, and his vocation. They were written with depth and sometimes with quotations from Solomon, or St. Augustine. Father Fogued collected and filed letters with the inscription: Letters from the holy brother Pedro Marcer. It was good to know that eventually, these letters would serve for the glory of God, and of the Congregation and of the Brother.

He also developed a lengthy service as director or advisor. He took every opportunity to teach catechism or sharing the faith with good advice or friendly reproof. Much more striking was his ability to guide and direct many couples in irregular situation, inviting them to join in the Sacrament of Marriage. Bro. Pedro prepared them, helped them in parish proceedings, and gave them money for the necessary arrangements, money he received from certain benefactors for those purposes. He did not omit means to help get them out of the situation they were in. Everyone knew that any after-hours call to the front door, was a couple to see Br. Marcer. It is said that he was able to manage at the rate of one marriage per day; there were years that he would prepare some 500 couples for marriage but it never fell below 400, with curious cases and many anecdotes. It came to be known that “our Porter of Santiago who legitimized more marriages than the whole Archdiocese together ‘.

His life did not pass in vain and he did leave his mark. Bro. Pedro had in mind the thought of death, not fearing it but as a stimulus for passage from this life to the next. He was prepared for that moment: “We all know that we die; the important thing is to be well prepared.”

During his last 16 years, he suffers greatly from a hernia, what eventually caused paralysis, because he had tried to ignore it. This caused him to be bedridden and unable to fend for himself. He also didn’t want anyone to attend or bother with him. No one heard him complain. Such was his unselfishness. On August 17, 1927, he was welcomed home to the heavenly kingdom.

Without going into analysis of certain mystical gifts attributed to him. All his life, he offered strong reasons for his brothers in the Congregation which they considered holy, as one of his Superiors said: “The saint, truly holy, the most holy brother Marcer”.