The Founder, in the light of experience, contemplates on the apostles, without exception, as largely persecuted, “Who will heed, beloved Theophilus, persecution, slander and other obstacles to be presented to Missionary, seeing that Jesus Christ, St. Paul and the other Apostles as with all the missionaries have had to go down that road? That’s why you must agree on what the prophet Isaiah said: And the quietness and confidence shall be your strength (Is 30:15). 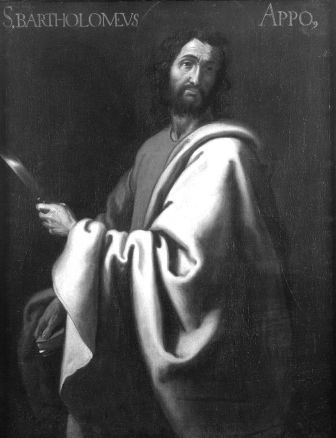 He is one of the Twelve of which we have little knowledge. His name seems to be the patronymic Bar Talmai, which can mean son of Tolmi (cf. Jos 15:14) or son of Ptolemy, witnessed by name Flavio Josephus. This apostle is known only because he is mentioned in the lists of the Twelve, in the sixth place (Gospels) or seventh (Acts); his presence in the group responds to a solid primitive tradition.

With no other information about him, there is a very later tradition, known only from the ninth century, where he is identified with Nathanael from the fourth Gospel; Nathanael would be his name and Bartholomew the patronymic. But the only grounds that this could be invoked is very weak: it is only found in John (1:45) Nathanael is called by Philip and in the Synoptic lists of the Twelve Bartholomew always goes ahead of Philip, but in Acts (1:13) there is a breaks in succession. Such identification is due to an old trend -today it is abandoned- to make disciples of Jesus in the fourth Gospel with the Twelve.

If such identification was historic, we would know about Bartholomew-Nathanael a little more: he was from Cana of Galilee (Jn. 21:2), that he heard from Philip the first witness of faith in Jesus although he received it with skepticism (cf. Jn. 1:45s), but once Jesus has spoken to him personally, he confesses him as Master, Son of God and King of Israel (cf. Jn. 1:49). After the Passover, we find Nathanael with Peter and other disciples on the Sea of Galilee fishing and receiving an apparition of the Risen One (cf. Jn. 21:1-3).

Lacking news on the biblical apostolate of Bartholomew, legendary tradition made him a missionary in India, Ethiopia, Arabia, Mesopotamia, Lycaonia, Asia Minor, … Also on his death the most varied traditions spread: in the East, he is revere as being crucified, the martyrology of Rabanus Maurus presents him as decapitated and, according to St. Isidore of Seville, he would have been flayed.

In his letter to the missionary Theophilus, Fr. Claret say about St. Bartholomew: “Who will heed, beloved Theophilus, persecution, slander and other obstacles to be presented to Missionary, seeing Jesus, Paul and the other Apostles and all the true missionaries have had to go down that same road? That’s why you must agree on what the prophet Isaiah: “quietness and confidence shall be your strength” (Is 30:15). You seeks silence, work and hope that the Lord will vanquish that storm. And if the persecution is strong, you will go to another city (Mt 10:23), but never forsake or abandon your ministry” (3, p. 353).

In the Constitutions of 1857, this fiery exhortation is ardently Claretian: “The worldly love those honored and esteem of men […] and abhor those who loved Jesus Christ; dishonor, slander, persecution, poverty, pain and death on the Cross. The missionaries, as disciples and children of Jesus, seek to wear the same garments of Jesus; so that where his divine Majesty would be not offended, nor the accused to blame others, wishing to go through tribulations, slander, false statements and insults, and be taken for fools, not however giving them any occasion, and imitating the holy Apostles of which the Sacred Scripture says, “the Apostles went forth joyfully in the presence of the Sanhedrin that they were counted worthy to suffer shame for the name of Jesus” (Acts 5:41). Blessed are those who reach that level! And he must reach those who desire to be authentic apostolic missionaries, so that he can say of each of them that which comes from the prophet “like sharp arrows in the hands of a strong man” (Ps 119:4).”