On August 25, 1855, the Venerable Maria Antonia Paris and St. Anthony Mary Claret, Archbishop of Santiago, Cuba, experienced the fulfillment of a dream. The Decree of Foundation of the Sisters of Mary Immaculate, the Claretian Missionary Sisters, was signed in Santiago, Cuba. Maria Paris was 41 years old, when on September 3, she made her religious profession at the hands of Claret, accompanied by Mary Joseph Caixal, Antonia Gual and Mary Gual.

Today, the Claretian Missionary Sisters serve throughout the world in cooperation with other members of the Claretian family, renewing the Church and enabling others to do the same in ways best suited to a particular locale and culture. 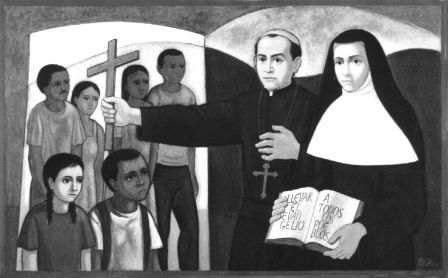 Throughout the nineteenth century, Spain experienced profound and widespread turbulence. Ideas of the Enlightenment set off the French Revolution and ignited near chaos in Spain. The Old Regime fell and with it the traditional pre-eminence of religious belief. The Church, unable to keep pace with the onslaught of revolutionary ideas, suffered persecution and the imposition of anticlerical policies. The material wealth of the Church, as well as its social influence of the Church, were undermined. Unfortunately, the fervor and will of the clergy and religious left much to be desired. Religious houses were shut down and religious communities were forbidden to receive novices.

Antonia Paris was born in Vallmoll, Tarragona, Spain, on June 28, 1813. In 1841, she entered the Company of Mary, and remained a postulant for over nine years due to laws forbidding the reception of novices. A year after joining the Company, Paris thought for the first time of founding a new religious congregation. Fourteen years later, she said the thought came to her, while she prayed before an image of Jesus crucified, when she experienced him say: “Yes, my daughter, I want a new order, not new in doctrine but new in practice” (Autobiography nn 4. -14).

Three years later, Paris was told that Anthony Claret, a young Catalonian apostolic missionary, would assist her in bringing her dream to fruition. In January, 1850, her confessor Don Jose Caixal invited her to Tarragona to meet Claret. By then Claret had founded the Congregation of Sons of the Immaculate Heart of Mary, and been appointed Archbishop of Santiago, Cuba.

After suitable discernment, Paris made the extremely difficult decision to leave the Company of Mary, and along with Florentina Sangler, began to lay the groundwork of the new community. In a short time, they welcomed three young women, and on August 15, 1851, the five vowed “to cross the seas and to go anywhere in the world without any division among us…prepared to undertake any work for the love of our Lord Jesus Christ” (Autobiography 121). Three days later, Claret asked the women to accompany him to Cuba.

The death of Sangler did not deter the remaining four. On June 7, 1853, they began their novitiate. In early 1854, Caixal sent nine aspirants from Spain. Finally, on July 16, 1855, the Decree of Foundation was signed.

What inspired Mother Paris and her companions?

Claret says of a Missionary Son of the Immaculate Heart of Mary: “He delights in privations, accepts all forms of slander and rejoices in torment. His only concern is to imitate Jesus Christ in his work and suffering…”

– Focusing on the Word of God by the testimony of a life of poverty and simplicity and living to the fullest extent the evangelical counsels.

– Preaching the Gospel to every creature, going anywhere in the world without separating themselves from the other sisters.

– Living a profoundly common life and holding all in common.

– Most important, to live as contemplatives in action.

The Claretian Missionaries Sisters serve throughout the world, in cooperation with all members of the Claretian family, focusing on the renewal of the Church, enabling others to do the same and determined to accommodate the needs of all, in spite of diversity, division, place or time.