St. Anthony Claret mentions St. Stephen in his Autobiography, not only as a patron saint, but as a model of vocational identification. He also makes reference to Stephen in his future missions of gaining power over evil. Further for Fr. Claret, St. Stephen indicates that his struggle would no longer be only against the flesh, but against all forms of evil.

Stephen was of Jewish origin. The term esteb means crown. For this reason, he understood his name signifies “Crowned.” God honors his name crowning his life with martyrdom. 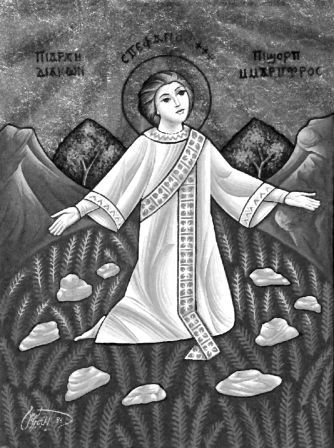 He is the proto-martyr because he had the honor of being the first martyr who shed his blood in proclaiming his faith in Jesus Christ. His conversion to Christianity is completely unknown. The Sacred Scripture refers to him for the first time in the Acts of the Apostles. It tells that in Jerusalem there was a protest by the Hellenistic widows. The widows were saying that in the distribution of the daily food, preference was given to those who were from Israel, than the poor from abroad. When this community began growing, the Apostles, so as not to leave their work of preaching, entrusted the service of the poor to seven ministers of charity, the deacons. These were elected by popular vote, to be men of good conduct, filled with the Holy Spirit and of prudence. Among the chosen was Stephen. In addition to being an administrator of the common property, he did not stop from announcing the Good News. The word of the Lord spread and the number of the disciples multiplied dramatically in Jerusalem.

The circumstances of martyrdom indicate that the stoning of Stephen was not an act of violence by the crowd but rather a judicial execution.

The feast of St Stephen was always held immediately after the Christmas, being the proto-martyr, was closest to the birth of the Son of God. In the early Church there was a second feast of St Stephen on August 3, to commemorate the discovery of his relics, but by a motu proprio of Pope John XXIII, on July 25, 1960. This second feast would later be removed from the Roman Calendar.

St Stephen is the patron of Sallent. In the parish Church of Sallent there is a side chapel which was built in 1419. Claret tells us in his Autobiography that the first sermon he preached after being ordained a priest, was a reflection on the patron saint of the town (cf. Aut 103). The feast of St Stephen was celebrated in the town on September 13, 1835.

Claret mentions St Stephen when he narrates in the Autobiography, his experience of victory over the temptation against chastity (cf. Aut 97). In other autobiographical documents, he recounts this vision in the third person and interprets the proximity of St Stephen with these words: “I also saw a band of saints standing at her right hand, in an attitude of prayer. I didn’t recognize them, except that one seemed to be St Stephen with the Dalmatic of a deacon. Since he is the patron saint of the town, I believed that for this reason he had attended the combat; But some years later, this student would be ordained a deacon. The Lord helped him to understand that in the same ordination why St Stephen had attended so close to him. When the Prelate said those words of the Apostle: It is not only our fight against men of flesh and blood, but against the princes and powers, against the champions of the darkness of the world, against the evil spirits scattered in the air” (3, p. 40).

In his deaconate ordination in 1834, Claret understood that presence of St Stephen, not only as a patron but as a model of vocational identification that showed him his future mission of winning over the powers of evil. Also, St Stephen indicated that his struggle would no longer be only against the flesh, but against all forms of evil, diverse and confusing. In this interpretation, the apostle Claret, intuits not only the presence of the enemies of the kingdom of God, but also the strategy to overcome them.

Awareness of this victorious apostle didn’t cloud the view of Fr. Claret. When remembering St. Stephen, he envisions the fate as a follower of the Apostles, to be able to run. In his Letter to the missionary Theophilus, Fr. Claret says: “Do not think, beloved Theophilus, that in Jesus the persecutions end, as the persecutions ended with the old law; the opposition continues its impact and will continue with contradiction and persecution. As we see in St. Stephen, who was thrown outside the city and they stoned him (Acts 7:57-58). That day marked the beginning of a great persecution against the Church of Jerusalem, said the Holy Scripture” (2, p. 352).

The lesson that Fr. Claret makes of the persecution, he experiences it himself in an evangelical and apostolic reading: “I am also much encouraged by reading the Acts of the Apostles […] with great concern and zeal they rushed from one kingdom to another, preaching zealously and without human fears or concerns, considering that God must be obeyed rather than men![…] Scourging could not intimidate them into giving up their preaching; on the contrary, they counted themselves fortunate to be able to suffer something for [the love] of Jesus Christ” (Aut 223).

As deacons of the Word, we are called to be apostles in the style of Claret; “we do not fear on the way because God is with us. He has chosen us and accompanies us. Your rod and your staff strengthen our journey and give security at the time to move forward. […] Mary and the Cross serves as indicators. Mary is the star of evangelization. The rhythmic scourge of the fall (of the cross) helps us not forget the essential values of the mystery of the Redemption. To look to Mary and the Cross, renews us for the journey to Jesus. We rebuild our fraternity and we find strength to face the risks, difficulties, persecutions, martyrdom and death in the mission entrusted to the Church” (1, p. 12).