Biblical research distinguishes three different characters dealing with the name John. One is John, the brother of James and son of Zebedee. Another, the Beloved Disciple. The third is the writer of the Fourth Gospel.

There isn’t any information of when and where the Beloved Disciple died. What is important is that he and his school gave a profound reflection on Christ and his work. 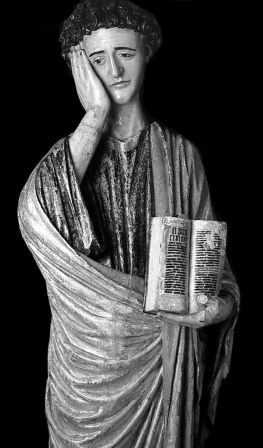 Fr. Claret admired the writing of this Apostle. “The most illuminating of the Gospels which gave profound views of Jesus Christ, such as thoughts which the Lord shared when John reclined on his chest. […] But woe! How many rather than giving honor to Jesus Christ would dishonor and change the phrase of the Apostle, as Antichrist!” (2, p. 297).

Current biblical science distinguishes three different characters dealing with the name John. The antiquity unified the three in one and the same person. Given that the most important thing for us is the Gospel that was formed in the community of the Beloved Disciple. We are going to focus on this character, if not the writer, certainly on the Christian reflection that was transmitted.

Not so long ago the Beloved Disciple was identified with John, the son of Zebedee. Conventionally, the Fourth Gospel, the three letters and the Apocalypse seen as Johannine works. However, the result of two centuries of research supports the widespread conviction that the Beloved Disciple did not belonged to the group of the Twelve, but was a disciple of Jesus of another origin (cf. 1, pp. 34 et seq.).

This explains that during the ministry of Jesus, the Beloved Disciple appears only in Judea, never in Galilee. Moreover, the Twelve play a very minor role in the Fourth Gospel. On the other hand, the existing antagonism between this disciple and Peter especially in the accounts of the Passion and Resurrection, is inconceivable that the Beloved Disciple was one of the Twelve. These and other indications, such as the presence of Beloved Disciple at the Last Supper, is an invitation to broaden the vision of the people and groups associated with Jesus. Without a doubt it deals with something more complex than what is noted in the Synoptic Gospels.

There are some who think that the Beloved Disciple was not an historical character, but an ideal. However, the reference to his death in Jn. 21:23 does not support such an opinion. It certainly deals with a person of flesh and blood, like Peter.

The community does idealize, proposing him as a model disciple: he who rested his head on the chest of Jesus (cf. Jn. 13:23) just as Jesus rests on the chest of the Father (cf. Jn. 1:18); and follows Jesus to the place where he is questioned and denied (cf. Jn. 18:15-18); Instead of fleeing at the time of the Passion, he remains with his Lord even being present with the women at Calvary (cf. Jn. 19:26); he arrives more quickly to the tomb and believes in the Risen Christ (cf. Jn. 20:8). Possibly it wasn’t he who claims the self-designation of Beloved Disciple, but his community because of their veneration for him.

Discarding history which responds to such idealization of the Beloved Disciple who came from Judea, perhaps from Jerusalem, whose topography met with great precision; he spent some time in the community of John the Baptist; he was a follower of Jesus during his stays in Judea, and especially at the time of the Passion and after Easter became the undisputed leader for one of the Judeo-Christians groups that originated.

His community had to leave Palestine, due to the fact that he began confessing publicly about Jesus as God, originating a strong confrontation with the Synagogue. Perhaps some of his members were stoned as suggested by the text of John (10:33): “They stoned them for blasphemy because being only a man claiming to be God”.

We have noted that giving Mary to the Beloved Disciple by Jesus from the cross (cf. Jn. 19:26s) gives rise to various speculations about the future of both. The one which has been given more consideration is that they lived together in Ephesus until the Assumption of Mary. Also in Jerusalem there is a place venerated where Mary was living.

It is not possible to determine when and where the Beloved Disciple died. John was banished in Patmos (cf. Rev 1:9) and he is not the same person, but a tangential Prophet from his school. What is important is that the Beloved Disciple gave a profound reflection on Christ and his work. A reflection that communities left behind and were responsible to set it down in writing. These communities were very peculiar, clearly distinct from those of Pauline or Petrine origin, but perhaps toward the end of the 1st century, they were merged and gave rise to the Great Church. The books that we call Johannine provide data of great interest for the history of early Christianity, formed by varied and complementary groups.

Father Claret, in continuity with what was then the biblical science proposed, identified the characters. He admired the apostolic courage of the Sons of Thunder, a title given by Jesus to the Zebedee brothers, his fidelity and profound writings attributed to John.

In his collection of panegyrics, Fr Claret collects this testimony on John:

“An apostle is a man full of love for religion and caught up by this love goes in search of all sorts of works with his zeal, and devotes his labors to all the towns on earth. A holy and courageous guide in his business, and the first results that he gets helps to reach new victories. In this portrait of an apostle, are you not able to recognize the same St. John, and along with him, the image of the apostolate that you yourselves must exercise? What graces so excellent you have for this work? If Jesus Christ makes miracles, St. John is called to be a witness. He is one of the disciples that the Lord take up to Mount Tabor, where Jesus manifests His glory. He is one that will be going to Jerusalem, where Jesus will show his love, and is also the one who is at the sea of Tiberias where Jesus shows His power. Jesus Christ appears to him after having triumphed over death; and the Lord will send him to bear witness to the truth.

John to give such testimony in haste, and is an authoritative witness, because it is true: Verum est testimonium ejus (Jn. 21:24). The admirable facts is that when he preaches, he doesn’t speak of anything that he has not seen or heard: quod vidimus et audivimus. What is it about this man so powerful by his word that you will feel the thunder of his voice? In Jerusalem, where the blood of Stephen is fresh, and where the fires of the persecution is fuel in view of the victories that the Gospel has won” (2, pp. 284 ff.).

And in another place in the same work, our Founder continues:

“Matters for the feast of St John the Evangelist:

– Fidelity is the virtue of the apostolate: the loyalty of John equals the zeal to the other Apostles, but it is superior by its constancy. He preached like others of the Gospel in vast regions; going through Asia, Phrygia and other places: he founded churches, avoiding martyrdom and won merit obeying the name of the (Sons of Thunder) that he had imposed. The other apostles abandoned Christ in his Passion; John followed him to Calvary and was at the foot of the cross, without fearing the anger of the Jews. What reward did he receive? The gift of His mother from Jesus Christ […].

– The most illuminating of the Gospels and he gave profound insights about Jesus Christ. Insights that the Lord shared when he laid his head on Jesus’ chest: 1. The Gospel that he wrote, mainly about Jesus; 2. The Book of Revelation, which he exposes with magnificent figures of the greatness of Jesus Christ; 3. The Epistles, where John points what should be our devotion, confidence and conduct towards Jesus Christ. But woe! In how many places of honor to Jesus Christ and yet he is dishonor by changing the words of the Apostle, as Antichrist!” (2, p. 297).