Fr. Garcia was born in Hormicedo, Burgos, Spain on December 23, 1869. He was a Postulant in Segovia, Spain and made his Profession in Alagón, Zaragoza, Spain on December 16, 1886. He was ordained in Santo Domingo de la Calzada, Logroño, Spain on May 13, 1894, and was sent to Italy as the local Superior of the house in San Felice, Spoleto, Italy. Returning to Spain, he was made a professor of Philosophy at Cervera and later would become Superior of the house of Zamora. In 1912, he was appointed Provincial of Bética for six years and in 1918 was re-elected for another six years. In 1922, he was elected Superior General for twelve years (1922-1934) in the XII General Chapter in Vic, Spain. Reverend Father Maroto died suddenly in 1937, where Fr. Garcia was again elected Superior General for the period 1937-1949 in the XIV General Chapter in Albano, Italy. He died in Rome on February 24, 1950. He was an exemplary religious in every way, faithful to our vision of a life expressed in the Constitutions and always moved by a great love for the Church and the Congregation. 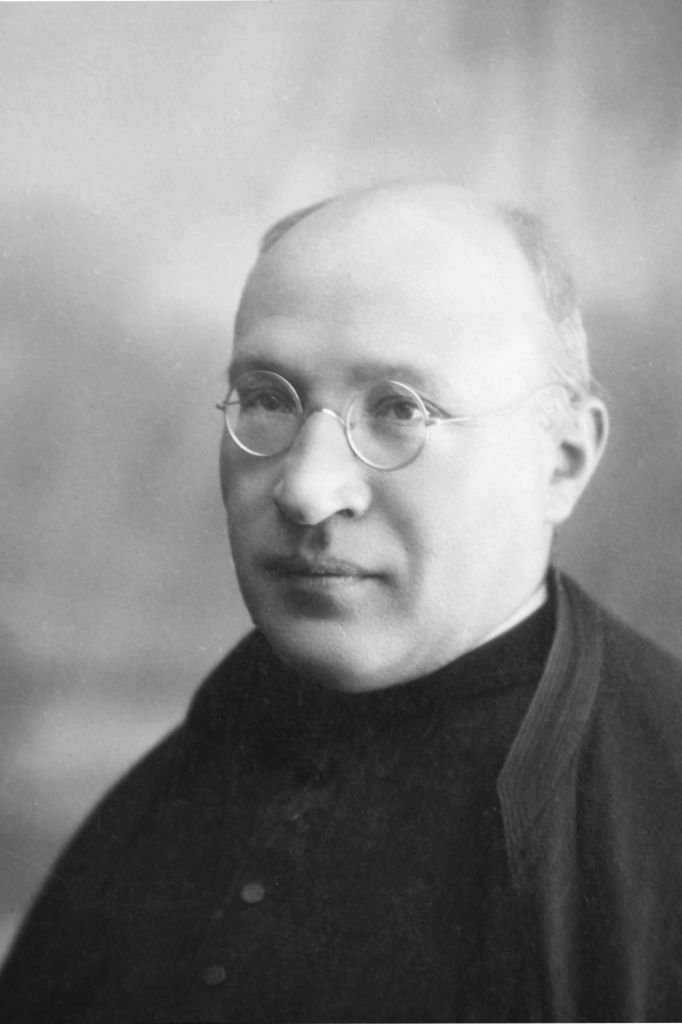 The Congregation was almost a hundred years old when it opened the missions in Darien, Tocantins and China. On the eve of the centenary of the foundation (1949), the Congregation had 2,638 professed members and 160 novices. The most peculiar was the expansion of the Congregation outside of Spain. There were 240 houses, spread over various continents: 97 in Europe, 8 in Asia, 11 in Africa and 124 in the Americas’. All these houses belonged to 10 Provinces, 2 Vice-Provinces and five Delegations. Among the Episcopate from the Congregation in its first century, there were 3 Archbishops, 8 Bishops, 1 Apostolic Vicar and 6 Apostolic Prefects.

It was also blest with a wealth of professors in Doctrine on Religious life, Charismatic dimensions, vocational and educational centers. After the events- with the martyrdom of many of our brothers, especially students – some Chapter circulars were written (1937) also on Missionary Vocation (1938). Dealing with formation in the Congregation, the circular entitled Formation of our students was written (1932) and Formation for Claretian Missionaries and religious (1947), by always asking for a quality formation to meet the challenges of the current times.

All Claretians are asked to be pro-active in supporting vocations. We were reminded of a fatal mistake to believe that once someone received the vocational grace and becomes a member in the Congregation, there was no need to worry about him. Rather, it is necessary to cultivate ones’ vocation, like a weak and delicate plant, which want to grow and develop. A vocation is a singular grace and this grace if not supported will be lost; so it must be the work of everyone to nurture it so that it may grow.

Government: In his first term (1922-1934) he completed the following achievements:

First, the International Votive Temple in Rome. In July 15, 1925, in Rome they celebrated the beginning of work in the Parioli district. The vision of this grandiose monument was because Pope Pius XI, wished that there be a Temple to the Heart of Mary in the Eternal City. The Holy Father confided to the Claretians of this need in the Catholic capital.

Second, was the juridical system and formation orientations, highlighting the Codex Juris Additicii (CIA), the Ordo Studiorum Generalis (OSG) and the Instructed Novice.

The mission to Russia. In 1922, the Holy See organized a charitable mission to remedy material needs, including places where there was possible hunger problems and its disastrous relief effects in southern Russia. The Holy See asked the Congregation, calling for their cooperation and the provision of personnel for the Pontifical Mission. The Superiors decided to generously offer their cooperation and agreed to send Fr.’s Peter Voltas and Angel Elorz who arrived in Russia, where they worked heroically in serving the needy.

Mission in China. In 1928, the Holy See asked the Congregation to take charge of the Central Kaiffeng Seminary in China. In 1937, the Apostolic Prefecture of Tunki was created and was entrusted to the Congregation. Fr. José Fogued was appointed first Apostolic Prefect. It was the first time that Asia accepted our missionaries. This assignment would be short lived, as the missionaries were expelled in 1949, due to the Communist Revolution.

Fourth: the beatification of Father Claret. On February 25, 1934, the first fruit of the labors of the Claretians was obtained when our Founder was beatified. In his address, Pope Pius XI spoke repeatedly to the people and the Congregation: “Congratulations to Spain … for this hero of holiness who was known so well in Spain, to which he devoted his entire life in all forms, even in the turmoil and dangers in the preludes of a Revolution.”

The vocational crisis, which occurred as a result of the Spanish Civil War, resulted in a significant drop in membership throughout Spain, a fact that was noted by the General Chapter of 1937. This encouraged Fr. Nicholas García to write a circular letter entitled The Missionary Vocation (1938), in which invited all members of the provinces to increase the number of Postulants and pre-Postulants and to choose a vocation promoter.

Foundation of new magazines: In 1938, Fr. Arturo Taberah submitted to the General Government a plan to create a magazine focusing on Religious Life. In 1944, the first issue was published in Madrid. The Religious Life magazine is recognized as the great pioneering instrument of renewal of religious life, not only in Spain but in 85 other countries.

In 1940, Fr. Narciso García Garcés, with a group of Spanish Theologians, founded the Spanish Mariological Society, which began the Mariological Weeks and would publish “Marian Studies.” Later the journal Ephemerides Mariologicae, published by the Claretians would follow.

“The Congregation, Fr. Nicholas said, has suffered a blow in its membership, with the Spanish Revolution and because of this, there is an absolute need of increasing personal, but quality personal; it is not just the number but the quality that helps make religious institutions. It is necessary that all the Sons in the Congregation promote vocations, so that the Institute can serve not only the multitude of works at hand, but it can expand its scope and extend its influence to all peoples and ministries “(1, pp. 327, 862).

The formation of missionaries

“The formation should to be founded on Jesus Christ. It’s necessary that the Son of the Heart of Mary, in his formation, begins taking on the image of Jesus Christ, the Eternal Priest, the Divine Savior and Redeemer of souls by His doctrine and His precious blood. So by the time he completes his formation or career, it can be said: that Missionary is alter Christus.

The formation must be nurtured by the action of the Holy Spirit and of Mary. The Holy Spirit, is first agent of formation. It is the Holy Spirit that formed Jesus within Mary, The Holy Spirit alone can form the soul in the image of Jesus Christ. The Holy Spirit who inspired the Founder, will transform the missionary, Priest, Brother or Student in the Claretian ideal. Mary, formed in her womb and giving life to her most blessed Son, forms in her womb the Missionary, in her Immaculate Heart and nourishes him with divine grace until he is fully developed, according to the fullness of life in Jesus Christ and keeps him under her protection. She who is the Mother of perseverance.”(1, p. 107)

Promoting cultural awareness of the missionaries

“[…] The Chapter unanimously recognized the need to raise the cultural awareness of the Sons of Fr. Claret. Literary, scientific, ministerial, educational and social instruction for the members of the Congregation must progress each day collectively and individually. There is a need to constantly elevate the level of culture, so that we can exercise all our ministries with dignity. To use all means possible, as it is written in the Constitutions (II, Chapter XVI.); of all ministries, not just for the poor, but even the wealthy, in order to communicate Divine things in the most appropriate language so as to cultivated intellects, when it comes to the spiritual or religious matters, and at times are needier than the other classes. One cannot forget the Apostolic Missionaries standard: Omnibus debitor sum, sapientibus et insipientibus (Rom 1:14). It is therefore necessary that the missionary see culture as an indispensable instrument for his Divine mission in reaching souls. Science and virtue are the two feet of the missionary, both are essential (Constitutions, I, chap. XXVI) “(1, p. 858)

The vocation must be cultivated carefully so that one remains faithful and grows in the way of perfection. It is a fatal mistake to believe that once one received vocational grace, and becomes a member of the Congregation, transplanted or grafted into the Lord’s vineyard, that one can stop worrying (cf. 1, p. 346). “On the contrary, it is necessary to cultivate the vocation, as a weak and delicate plant which want to grow and develop. If it is left to itself, exposed to the elements of time, the heat of the sun, the bite of insects, a plant infallibly will die. So you die, you will lose your vocation if it is not cultivated, preserved or defended” (1, p. 347). ”The reason is that the vocation is a singular grace and if that the grace doesn’t correspond to it, then it’s lost; so it must be the work of everyone to help it grow “(1, p. 349).

To nurture a vocation begins even before the individual receives it and it must be constant; not only in the Postulate, or in the Scholasticate; not only in the early years of public ministry. It is a lifelong vocation which must be nurtured (cf. 1, p. 349).