FEBRUARY 25 – BEATIFICATION OF OUR FATHER FOUNDER

Pope Pius XI beatified Anthony Mary Claret in St. Peter’s Basilica on February 25, 1934. In attendance were the members of the 13th General Chapter, which would convene three weeks later.

With the beatification, following Jesus in the style of Claret was endorsed by the Church as a path to authentic and productive holiness. It was a moment of grace that inspired and energized our missionaries across the globe. 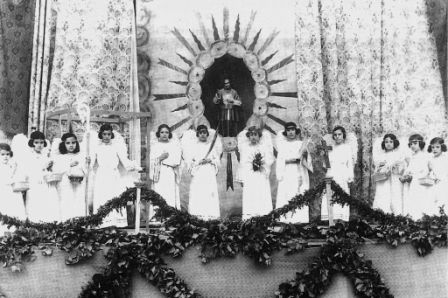 Pope Pius XI lauded Claret as a man who lived in an extraordinary manner his vocation as an apostolic missionary. Thereafter, the faithful could turn to Claret as intercessor and as model of Christian holiness. In his lifetime, Claret was blessed with a profound love of God and discovered in God’s Word his very identity and mission as an apostolic missionary. Forsaking everything, he pursued the path of conformity to Jesus the missionary as priest, missionary, founder, bishop, confessor and object of persecution. His was a life of a prophet in service to the Word, laying down his life out of love. For the Claretian Family, the observance of this anniversary should remind all of us of our own calling to follow Jesus the missionary fully and passionately.

Several weeks later, Pius XI said to the members of the 13th General Chapter: “… as religious, through whose veins runs the missionary blood of your Patriarch, you know full well that this General Chapter, cannot but be a new point of departure. For as much as God might delight in and appreciate what has been accomplished in the past, there is always more to do, always more, always better…” We must carry on this tradition, whose roots are sacred.

A Long and Intense Process

Fr. Claret’s integrity and missionary holiness were obvious to all who observed his apostolic zeal, particularly to those who knew him closely. He was, nonetheless, the object of an ongoing smear campaign, waged by political factions, frustrated by their inability to capitalize on his influence with the Queen. Newspapers, books and leaflets portrayed Claret as morally compromised and driven by a lust for power. The slander weighed heavily on Claret, but his reputation for holiness withstood the assaults. Following his death, the Congregation began collecting the testimonies of those who knew Claret well. Fr. Jaime Clotet set about this task with enthusiasm, commitment and perseverance.

In 1887, the first steps toward the introduction of the Cause of Beatification were taken under the auspices of the bishop of Vic. The dioceses of Madrid, Tarragona, Barcelona, Lérida and Carcasona also conducted their inquiries. In 1890, the Ecclesiastical Tribunal of Vic informed Fr. Josep Xifré that the process was ready to be introduced in Rome. Fr. Xifré took with him more than two thousand pages of testimony.

After reviewing the cause, Cardinal Ledochowski, who presided over the process, exclaimed, “How great is the cause of our Servant of God! What a beauty! In twenty years dealing with these matters I have not seen a more interesting case. “

In late 1895, after careful study of 123 works attributed to Claret, Pope Leo XIII allowed the process to move forward.

On December 4, 1899, Pope Leo instituted the Commission for the Introduction of the Cause. His decree reads: “Among the prelates of the Spanish Church who attended the First Vatican Ecumenical Council, the Servant of God Anthony Mary Claret is distinguished for his works, words and reputation for holiness…”

Once more, from 1900 to 1921, apostolic processes in Vic and throughout Spain continued to search for evidence of the virtues and alleged miracles of the Servant of God.

On February 18, 1934, Rome confirmed two miracles attributed to Claret’s intercession, and on February 24, issued the decree allowing for the beatification of the Servant of God.

Two outstanding postulators guided the decades-long process: Fr.JeromeBatlló(1891-1913)and Fr.FelipeMaroto(1913-1934). Their dedication was truly heroic, given that the slanders that dogged Claret continued to undermine the efforts of the postulators. Fortunately, truth prevailed.

In May, 1897, 15 year old Miss Javiera Mestre, a resident of the city of Lleida (Spain), contracted smallpox. In danger of death, she sought the intercession of Venerable Claret, and woke up the next morning completely healed.

In 1930, Sister Benigna Sibila Alsina, of the Sisters of St. Philip Neri, was diagnosed with a severe ulcer in the lower abdomen. As a last resort, her doctors were prepared to proceed with surgery but Benigna’s extreme weakness deterred them. When she and her Sisters sought the intercession of Venerable Anthony Mary Claret, Sr. Benigna was healed instantly and completely.

Celebration of the Event

February 25, 1934, the day of the beatification was the Sunday of the Lord’s Transfiguration. The life of Venerable Anthony Claret had been transfigured by God’s love, which Claret in turn caused to be shone throughout Spain, Cuba, Italy and France.

Of Claret Pope Pius X wrote: … From apostolic times to the present era of missionary activity among non-believers, God in his goodness has drawn true followers of Jesus Christ to bring others in a timely and suitable manner to the Divine Redeemer. They do this particularly by an exemplary life and their teaching. In the nineteenth century, [Claret] was gifted with a keen understanding of the threats to the church and society. Rapid progress in science, technology, as well as the arts, led many to challenge the relevance of the faith and the place of the church in society. At every turn, efforts abounded to re-establish society on secular rather than religious and ecclesiastical principles. Outstanding men and women resisted the tide. Among them was Venerable Anthony Mary Claret, apostle to Spain and its possessions, who as a diocesan parish priest, apostolic missionary, archbishop and founder of the Congregation of Missionary Sons of the Immaculate Heart of Mary, responded with extraordinary dedication to these challenges, leaving us an admirable example for our imitation.

Following the Mass of beatification, Pope Pius visited St. Peter’s Basilica to venerate the relics of the new Blessed and to ask his intercession. The next day he gave a speech to the large group of pilgrims from Spain.

Resonances in the Life of the Congregation

For the Congregation, the decades-long long process was a time of expectation and longing. On June 13, 1897, the remains of the Servant of God were moved from the Cistercian monastery of Fontfroide in France to the Church of La Merced, adjacent to the Mother House of the Congregation in Vic.

In February, 1934, on behalf of the Superior General, Father Juan Postíus wrote a circular letter, encouraging all Claretians to prepare for the beatification of our Father Founder. He proposed a three-day retreat and a Marian-Eucharistic Holy Hour in all our churches on the day of the beatification.

On the festive day of the beatification, the entire Congregation felt represented in Rome by the members of the 13th General Chapter, which would convene in three weeks.

As cited above, Pius XI said to the members of the XIII General Chapter: “… as religious, through whose veins runs the missionary blood of your Patriarch, you know full well that this General Chapter, cannot but be a new point of departure. For as much as God might delight in and appreciate what has been accomplished in the past, there is always more to do, always more, always better…” We must carry on this tradition, whose roots are sacred.”