Born around 1491 Azpeitia, Guipúzcoa (Spain), Iñigo López de Loyola was serving in the military, when he was seriously injured. During his recovery, he read Ludolfo the Carthusian’s Life of Christ and Jacopo da Veragine’s Golden Legend, the lives of the saints, and was forced to ask himself: “If these men were made of the same mud as I, surely I can do what they did.” 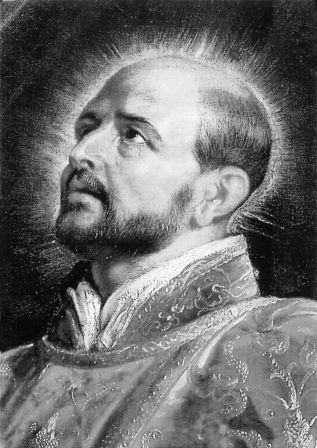 In 1522, after an apparition of the Virgin Mary, Ignatius set out on pilgrimage to the Holy Land. At the Benedictine Abbey of Montserrat he made a general confession, set aside his military garb and made a vow of perpetual chastity. An epidemic in Barcelona forced him to hold up in Manresa, where he was inspired to found a company of consecrated men. Hold up in a cave, Ignatius, began writing what in time would become the Spiritual Exercises.

Among other things he wrote: “In order to imitate Christ our Lord and resemble him always more truly, I desire and I choose the poverty of Christ, to be poor rather than wealthy. More than honors I choose to be humiliated with Christ, to be thought an idiot and crazy for the sake of Christ rather than wise and prudent in the eyes of this world.” Ignatius suffered a terribly dark night, but later the Lord filled him with the most profound spiritual joy.

Ignatius arrived in the Holy Land in February, 1523, but unable to remain there and unsure what to do next, he returned to Barcelona, where at age 33, he undertook the study of Latin before moving on to university studies in Alcalá, Salamanca and Paris, all the while devoting himself to penance, instructing children and converting many sinners with his gentle rebukes.

In 1534, Ignatius and his companions made private vows in the chapel of Montmartre in Paris, then set out for Rome to put themselves at the disposition of Pope Paul III. In 1537, several members were deployed throughout Europe and Asia. It was at La Storta, near Rome, where following a vision, Ignatius was confirmed in his resolve to found a community, which would incorporate the name of Jesus. Finally, on September 27, 1540, the pope approved their Institute. On April 22, 1541, at the Basilica of St. Paul Outside the Walls, the group made their profession of vows. Ignatius had been ordained to the priesthood in 1537.

In addition to the three vows of poverty, chastity and obedience, members of the Society of Jesus make a fourth vow to work for the good of souls wherever the Pope chooses to deploy them.

For the rest of his life, Ignatius devoted himself to governance of the Society of Jesus and to preaching the Gospel. He died in Rome on July 31, 1556, and was canonized by Pope Gregory XV on March 12, 1622. Pope Pius XI named him patron of the spiritual exercises and retreats. In his unrelenting opposition to error and vice, Ignatius initiated the reform that would culminate in the Council of Trent.

St. Ignatius loomed large in the life and spirituality of St Anthony Mary Claret, thanks in large part to Fr Pedro Bac, who directed Claret during his seminary years, and to Claret’s time as a Jesuit novice in Rome.

Claret frequently praised Ignatius’ love of Jesus Christ and his ardent zeal as a catechist and preacher of the gospel. The first editions of our Claretian Constitutions, written by Claret, are imbued with Ignatian spirituality.

Claret saw Ignatius as a model for the church, as well as our Congregation, in wielding a two-edged sword against opposition to the Gospel. Claret delighted in Ignatius’ motto: “Ad majorem Dei gloriam”, although he chose for his own episcopal motto the words of St. Paul: “Caritas Christi urget nos.”

Both Ignatius and Claret left us autobiographies, which speak of encountering the living God and being redeemed by his grace. Both experienced conversion in their youth: Ignatius while recovering from injury and Claret as a result of his disappointments in Barcelona. Both experienced a vision of the Virgin Mary, and sought definitive victory in chastity and their decision to devote themselves fully to the service of Christ. Both Ignatius and Claret cultivated a profoundly Christological, theocentric spirituality and were profoundly devoted to the Lord in the Eucharist.