Martin Alsina was born in Manresa, Barcelona, Spain, on September 4, 1859. His family was deeply religious. In 1871, he began to study Latin at the College of Manresa, from where he proceeded to the Institute of Barcelona and the seminary of Vic. As resident teacher in the household of Portell Sant Juliá, a short distance from Vic, Alsina taught letters, reading and catechism to the children of the family. In the seminary he was distinguished for his industriousness, his application to his studies and his solid character. 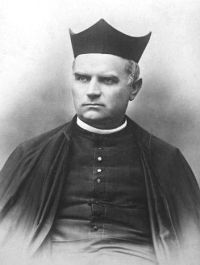 Alsina entered the Congregation of Missionaries in Thuir, France, on July 16, 1879, under the aegis of his Novice Masters Fr’s. Jaime Clotet and Clemente Serrat. He made his profession of vows at the hands of Fr. Clotet on August 20, 1880, and was ordained a priest on March 24, 1883. Named Superior of the new community of Thuir, Alsina proved himself outstanding for his discretion. From 1886 to 1894, he served as Prefect of students, first in Vic, then at Santo Domingo de la Calzada. In 1894, he was appointed Secretary General under Fr. Josép Xifré, and when Xifré died in 1899, Alsina was elected Deputy Director General under Fr. Clemente Serrat. In 1906 he was elected Superior General and served until his death on March 2, 1922.

Under Alsina’s leadership, the Congregation’s membership and the number of its foundations increased dramatically. By 1912, there were 1,633 professed members, 120 novices, and 112 houses. By 1922, the Congregation there were 1,943 members and 834 candidates, including three bishops and an apostolic prefect. By then two bishops, 388 priests, 244 students and 283 brothers. 917 in all, had died. There were ten provinces and vice-provinces with 154 houses: Catalonia, Castilla, Bética, Chile, Mexico, Brazil, Colombia, Argentina, Guinea and the United States of America.

As Superior General, Alsina emphasized both initial and ongoing formation. He adopted the Mirror of a Postulant, written by Fr. Ramón Ribera in 1907 for candidates in the formation house in Vic, but he exhibited particular concern for struggling members of the Congregation to whom he addressed his circular letter Remedies to Discontent in Living Religious Life. Under the guidance of Mary, our missionaries were to be solidly grounded in the imitation of Christ, in order to live joyful and spirit-filled lives, and trained to meet professionally the pressing needs of the times (see 1, 502-503).

Keeping pace with the spread of the Congregation, Alsina traveled to Africa and the Americas. The Congregation for the Propaganda of the Faith offered the Claretians posts in Baja California (Mexico) as well as western Africa.

Alsina oversaw foundations in the United Kingdom, France, Germany and Central Europe. In 1912, thanks to the tireless efforts of Frs. Ramón Genover and Antonio Pueyo, the Congregation founded houses in Hayes, London (UK) and Trieste, Italy, and in 1913 a house in Paris, where Claret had preached and worked…

In 1918, the Claretian Missionaries returned to Cuba. Few inhabitants of Palma Soriano remembered Claret, although he had visited twice, accompanied on his second visit by the Capuchin Blessed Stephen Adoain.

Alert to the spiritual welfare of the missionaries, Fr. Alsina addressed discontent in religious life and in the Congregation. In his opinion, the remedy lay in fidelity to one’s vocation.

Alsina believed in a spiritual impulse, leading one to do the will of God and to glorify God in all things. Fidelity to this impulse guarantees inner peace and effectiveness, no matter one’s situation.

He insisted that our missionaries be of solid character. “It isn’t easy to make an exact enumeration, but a missionary cannot be ill tempered, selfish, arrogant, vengeful, wrathful, suspicious, fickle, reckless, sullen, ignorant, contemptuous, mocking or deceitful, all of which are harmful…He must be concerned with the well-being of his companions and of those he is sent to serve: generous, gentle, patient, sincere, thoughtful, formal, kind, steady character, fair, compassionate, forgiving, social…Being in possession of such a nature is to possess the greatest treasure as a missionary. He possesses true moral freedom, rational independence, the strongest spiritual peace, perfection of a missionary personality, able to adapt to everything and everyone, to win everyone for Christ, as the Apostle did. Is not it therefore worthwhile that we all work in order to form this character? On the other hand, a poorly formed missionary is a slave to his feelings, a perpetual child, laughing or crying. rejoicing or suffering, with his ups and downs, dependent on circumstances and the people with whom he interacts. There is nothing dependable in such an individual” (1, p. 507).

Mary formed Jesus and forms our missionaries today. A solid formation is founded in Christ and the imitation of his life and his works. “It would be good for the Missionary to take Mary, our sweet Mother, and the basis and exemplar of his spiritual formation, in order to become the image of Jesus and to live the life of Jesus, until he is able to say with the Apostle: ‘I live, yet not I, but Christ lives in me’ “(1, p. 508).