This day, we remember our martyrs Fr.’s Federico Vila, Jaime Mir and Br. Antonio Vilamassana, from the community of Tarragona, who shed their blood for Christ.

Fr Federico Vila was born in Brull, Barcelona, Spain on March 13, 1884. Though he was known as a researcher, publicist and remarkable preacher, he always showed a modest, delicate and sensitive composure. His cause for beatification is linked to that of the Auxiliary Bishop of the Diocese of Tarragona. 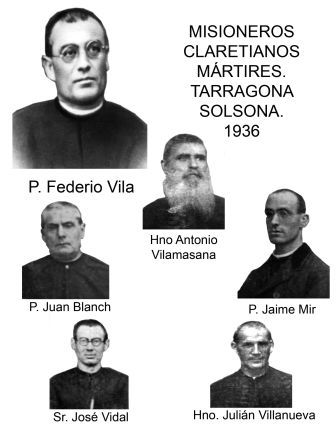 The Servant of God, Fr. Jaime Mir was born on December 22, 1889, in Ciutadilla, Lleida, Spain. He died because of his faith, during the Spanish Civil War and is buried in the Claretian Missionaries Church in Tarragona.

Br. Antonio Vilamassana was born in Masoteras, Lerida on January 28, 1860, and was martyred on July 25, 1936. In peace with God and with his conscience, he was ready to die for Christ. He led a simple life and his death hopefully opened the doors to eternal life.

He was a professor who was very sought after in the former University of Cervera; in Philosophy-Theology of Solsona and at the Pontifical University of Tarragona. He was a noted writer, particularly by his voluminous historical reviews filed at the University of Cervera, in addition to having collected biographical writings on Fr. Claret and careful of the Solariego Archives of Vic. He was known as a lover of peace and of academic works, he was a man of few words, but of action.

On July 21, 1936 two Claretians arrived in Tarragona from Reus notifying them of the burning of convents and churches in that city. On the same day, the community of Tarragona is dissolved. Immediately, Fr. Vila took refuge in house of the Sisters in Muntés. At dusk, he left the house with the intention of meeting with other members of the community scattered throughout the city. He was recognized as a priest and after being arrested near the Cathedral, was taken to the police station. They let him go free. On the morning of the 24th, he had to register the house where he was staying with the police. He was again recognized as priest and led to the small ship- Cape Cullera which was a floating prison. Sadly, he encountered other Claretians on the ship. Two days later, the prisoners were taken to another Mercantile ship called the Rio Segre. Only those who survived recall tragic memories while incarcerated. On this ship, with a large number of prisoners, reaching 300 people divided by the various stalls; they encountered anguish and dejection, exposed to hostile attacks, obsessive control of prisoners, insecurity, the famous beatings of prisoners. Called out by name, they would join the group of those who were going to die.

After boarding the ship, Fr. Vila wrote in his diary: “sadness, abatement…” Fr. Quibus commented that “Fr. Vila maintained a calm and sensitive temperament as reflected in his journal of captivity. Reading it produced the same anguish of a diary of one which are recorded in the fluctuations of someone who is sick” (3, cf. pp. 423-426).

Fr. Vila felt torn by the absence of the consolation and support of his brothers. In that same line, he expressed his tormented feelings on the occasion referring to the end of the month of August, being the month of the Heart of Mary… this year it was a sad feast.

There was a time in which it seemed that the heavens opened and the hope of liberation was possible. In effect, with the arrival of the new War Courts, in the beginning of September 1936; replacing the pickets of the militia, improving the situation momentarily. On November 7, efforts were made for their release with success. Again, the notification doesn’t arrive on time. By the time the papers arrived to the ship and begin asking for the recipients, they were already gone. A patrol of the FAI, on the previous night, selected from among the prisoners all those who were priests. A group of 24 priests were taken to Torredembarra, north of Tarragona. There they were executed and their bodies buried in the cemetery on November 10-11, 1936. Nothing more is known of what happened during those confusing dates. The corpse of Fr. Vila, identified by Fr. Companys, was transferred on July 11, 1941 with solemnity to the cemetery of Tarragona. Those present were Claretians from the communities of Tarragona and Valls, with the assistance of the local authorities, as well as a large number of the faithful.

The remains of Fr. Vila rest in a mausoleum in the Church of Santo Reyes in Tarragona, currently administered by the Claretian community. Together with him, is the martyr Br. Antonio Capdevila, from the community of La Selva del Camp, Tarragona. He was assassinated on July 24, in the town of Vimbodí, Tarragona.

Together with the Fr’s. Juan Blanc, Federico Vila and Josep Puigdessens, they formed a community of distinguished professors from the Pontifical University of Tarragona, occupying the more prestige Chairs of greater standards.

On July 17, Fr. Mir had just finished giving Spiritual Exercises in the city of Esplugues of Francolí, Tarragona. Encountering some anxious days, he hid in the convent of the Vedrunas Carmelites in that town and then in the parish house. On the 28th, he went searching for a certificate to be able to move to Tarragona. Making this request, he was told that he first needed to report to the Committee. He returned to the convent to say farewell. His words were: “There is nothing to do. If we don’t meet again in life, then in heaven!” He was calm but very pale. Taking a moment for deep prayer, he waited passively until 8.30 in the morning. When leaving the house, the Sister’s asked for a blessing: “So, Father, we will have the consolation of the blessing of a martyr.” He was later taken by car by some militia in the direction of Montblanc. Mid-afternoon of the same day, July 29, he was buried in the cemetery of Tarragona.

The Carmelites of Vedrunas recalled that during those last Exercises, he had spoken more than once of martyrdom with much emphasis

Br. Vilamassana was imprisoned with Fr. Federico Vila, on the ship Rio Segre. He experienced the same living and suffering conditions being 76 years old. His death occurred in August 25. In that day the number of victims reached 60. The ritual of execution was the same for all those who would lose their life: the orders were given, chilling and penetrating, calling one or several names, ordering them to prepare to leave. Br. Vilamassana received the sacrament of forgiveness and waited for his death. In peace with God and with his conscience and convinced that he would die for Christ; then came the call of the leaders of FAI. The group was led to the nearby city of Valls and next to the cemetery, he was killed. He lived a simple life and his death a passage into eternal life.