Andrew, the brother of Peter, is presented in the Synoptic tradition as one of the first four disciples of Jesus. He has a special role in the fourth Gospel. He not only has been tied to the motive of the vocation, but in other situations, Andrew has been associated with Philip. 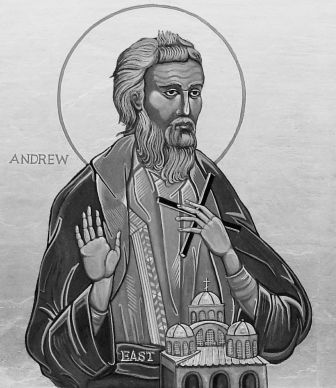 In a sermon on St Andrew, Fr. Claret emphasizes the missionary enthusiasm of this Apostle, that as soon as he knew Jesus, he begins looking for followers: “Seeking his brother Peter, he sees, calls him, speaks to him, preaches and convinces him […] If this holy man acted when he was more than a disciple, how much stronger and magnanimous would his work have been after that by Jesus Christ, if he was one chosen and pointed out as an apostle!” (2, p. 224).

The Synoptic tradition knows two vocations of Saint Andrew: one to be a follower of Jesus (cf. Mk 1:16s) and another to form part of the select group of the Twelve (cf. Mk 3:13ss). In the fourth Gospel, this follower of Jesus receives greater importance. Andrew along with the other anonymous disciple- many believe that it may be the beloved Disciple-, is the first to follow Jesus, in obedience to the words of John the Baptist. He introduces himself as the first follower, but also as the first Apostle, the seeker of new followers for Jesus: It is he who finds his brother Peter, and the following day Philip (cf. Jn 1:41-43a), and leads them to Jesus, which accepts them and they follow him.

The origin of Andrew and Peter is questionable. The fourth Gospel says they are from Bethsaida, as Philip who in the Synoptics (cf. Mk 1:29 par) places his home in Capernaum (and certain archaeological findings are inclined by this last opinion). In any case, the Fourth Gospel repeatedly pairs Andrew with Philip: both having Greek names (only ones of the Group of the Twelve), always together are incorporated in following Jesus, both are present in the multiplication of the loaves (cf. Jn. 6:5-8), and both are mediators between Jesus and the Greeks who want to be with him (cf. Jn 12:20-22). In this relationship of Andrew to the Johannine tradition, we have in addition an interesting testimony of the II Century, the Muratoriano Fragment, which says that Andrew encouraged John to write his Gospel.

The Greek name Andrew, as Philip, may be a sign of some immersion in the Hellenistic culture, something that was not rare in semi-pagan Galilee. This would predispose them in the future, to carry the Christian faith to the Greek people and out of their Jewish world.

Information – we do not know on what basis – from Origins by St. Jerome, we find Andrew preaching the Gospel among the Scythian, and subsequently in Pontus, Galatia, Cappadocia, Bithynia, and finally in Achaea. According to St. Jerome’s Martyrology of the Fifth C., St Andrew, who was already old was martyred in Patras, ending his life by being nailed to a cross in the form of an “X”. Previously, in the year 356, the Emperor Constantine had move St Andrews remains to Constantinople.

The Patriarchal Basilica of Constantinople, the center of the Orthodox Church, is considered to be the Cathedral of St Andrew, whose feast is the same in this place as in the calendar of the Church. So in Constantinople and Rome, the two Apostles brothers are venerated.

Fr. Claret, in his collection of Selected Panegyrics, devotes an introduction or schema to preach on the feast of St Andrew, an extended sermon about this Saint, and a series of additional considerations about his feast. Of this apostle, within the biblical data and the legend that later surrounded him, calls attention to Claret’s three main points: his promptness to follow Jesus, his haste and zeal for gaining followers, and his fortitude and self-giving in martyrdom.

“It seem plausible, that especially in Andrew, having recorded the first traces and showing the first followers the path towards the road with Jesus Christ, he invited them to join Jesus with special and expressive words. But, concerning promises or invitations, when one sees in the same Gospel and in the promptness of Andrew, he did not give a specific place to the Redeemer and a promise or even to invite them? With regard to each of the other disciples, a few words in truth was enough for them to follow Jesus; but with Andrew, the slightest voice wasn’t necessary to follow Jesus. Not satisfied with being the first to follow Jesus, he also wanted to be among those who remained without be invited; and to abide by the extrinsic and verbal appeal, was in no way Andrew’s who was sought by the Redeemer, rather, Andrew ran in search of the Redeemer in a spontaneous way: with spontaneity he approached Jesus, calling him before being called. On the other side of the Jordan the precursor preached at great length of Christ to many students at his school, and when he saw the Nazarene go by, he exclaimed: here is the expected Lamb of God; and this was enough for Andrew, taking with him any of his companions from the school to address the point about the Nazarene; he reaches, stops, and calls Jesus teacher: rabbi, Rabboni (Jn. 1:38). Not to question but to obey him in totality (J. Chrysostom)” (2, pp. 222s).

“He seeks Peter his brother, he sees, he finds him, speaks to him, he preaches and convinces him; and happy without waiting, he returns and bringing them to see the Messiah. Introducing them to Jesus […]. Oh value, oh fearless one, oh apostolic zeal that does not cease to be admired by all the Holy Fathers in a new disciple! Seeing Andrew already bearing fruit from the very beginning – St. Pedro Damiano says- and transformed by the preacher of the truth, he had just begun to be a listener […]. And if this work from this Saintly man, when he was no more than a new disciple, how much stronger and magnanimous would it have been had he not have been a worker; but for Jesus Christ, he was called and marked as an apostle!” (2, p. 224).

“After, going through thousands of strange countries, the holy Apostle has walked, and finally reaching Achaia, where day by day he shocks those who were pagans, and infuriated the Pro-consul, which in that province a renowned temple does not exist or is ruined […].To see that neither repeated flogging or imprisoned, did nothing to detract him from his commitment to that indomitable man in his fervor to deal strongly with paganism; pronounced against him a death sentence and nailed to a cross in for form of a “X” […].For two days he remained nailed to the cross, and another so he preached without wheezing, with admiration and wonder by all the people gathered there who heard him […]. More than twenty thousand people, who were reluctant to the sacred Word, finally were convert from the cross” (2, pp. 228s).