He was educated in the Christian faith and a love for the Virgin, to which the family prayed the rosary daily. Every area of the spirituality of Br. Giol is strongly marked by his experience, and it may be summarized in his Cordi-Mariana enthusiasm by searching for God in the Immaculate Heart of Mary. He confides in her with his abandonment, like the offering of a child to the love and care of his mother (cf. 2, p. 166s). 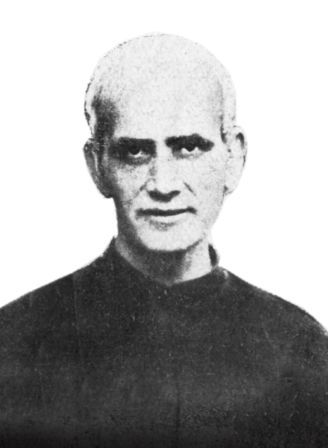 Br. Manuel Giol y Borrás was born in Borjas del Campo, province of Tarragona, Spain, on March 26, 1849, into a family of farmers. He was the third of four brothers, two of whom died prematurely. In July 1869, at age 20, he was called to Barcelona for military service. Against his will he had to participate in the Third Carlist War, and in the midst of a bloody battle, he vividly felt the protection of the Virgin Mary. In 1874, once discharged from the army, he moved with his family to Barcelona and there -like the young Claret- worked for two years with remarkable skills in a textile factory. His religious vocation nourished since childhood, led him to decide to associate with the members of the Missionary Community of Gracia. On June 13, 1876, he entered the community and began the Novitiate in the Mission-House of Gracia under the wise guidance of his Novice Master, Fr. Jaime Constans. On July 21, 1877, at the age of 28 years, Brother Giol made his religious profession. He felt the joy of being called a Son of the Immaculate Heart of Mary. This title would accompany him daily with greater intensity and depth in his 33 years of missionary life.

The first assignment of Br. Giol would be the residence of Alta de San Pedro, in Barcelona, where Father Rota, Minister General of the Congregation, had requested him, secretary and as an accountant. The Brother also provided for the community as a cook, tailor and porter. In the midst of his many occupations, Br. Giol seemed to find time for interior recollection and a spirit of prayer.

The multiple jobs and mortifications weakened the health of Brother Giol, making it advisable that his transfer to the community of La Merced in Vic, where he lived between 1887 and 1891. In the Motherhouse of the Congregation, Brother Giol continued to demonstrate an extraordinary virtue, not because he made great things but -in the words of his biographer- by “doing extraordinarily well the ordinary” (1, p. 111). Among the traits most notable of his particular spiritual physiognomy, we can highlight that the elderly Father Clotet –who was his spiritual director in these years- and that he was considered a model with the characteristics of a child of the Heart of Mary. Namely, three loves: the Eucharist, the Heart of Mary and the Congregation; the three virtues: prayer, humility and fraternal charity; and a means for spiritual progress: to live in the presence of God. As he was very balanced, Br. Giol followed this program of life, which could be said that he was always collected as if he were before the Blessed Sacrament, whether it be at meal time or when he went shopping at the market.

Once his health improved, Br. Giol returned again to Barcelona to continue to collaborate with the Minister General, who at that time was Father Homs. He resumed the assignment as porter, cook and tailor. He would also take advantage of any opportunity to assist in the apostolic ministry. In fact, his way of speaking of God, the Virgin and the good works made his missionaries awaken in many people, a religious vocation. A sample of his apostolic meaning can be this text: “I am Brother; but missionary Brother; and missions that I must give …the prayer and good example, this is the twofold instrument of my missions…” (1, p. 205).

As he continue to progress in the path of evangelical perfection, Br. Giol acquired a deep knowledge of spiritual things. Nurtured with the Sacred Scriptures (including the Song of Songs) and the works of spiritual teachers (St Teresa of Jesus, Thomas Kempis, Mother Ágreda…), he was wisely guided by his spiritual directors. He was driven above all by a very strong relationship with Jesus Christ and with the Heart of Mary, his beloved mother, with whom he maintained continuous and fervent union. If there was anywhere he could live in the presence of God and be collected in prayer, it was to celebrate the Eucharist or in the long hours of prayer before the Tabernacle, where his soul felt particularly attracted and absorbed by the divine love.

What one could not imagine, was to watch him always so calm and collected. Yet there was a difficult spiritual battle which he had to sustain to preserve his chastity. Of this inner struggle, which challenged his trust and fidelity for this grace, was freely given on December 8, 1903, the feast of the Immaculate Conception of Mary. Her maternal intercession was attributed to his victory.

The rich and profound spiritual and Cordi-Marian experience of Br. Giol was reflected in the numerous books containing notes and accounts from two broad treaties: Lodgings in the Heart of Mary -the soul in love and testing of the inner life or -in the formulation which is more complete- Tests for the interior life, learned in the Immaculate Heart of Mary to walk in the perfection and join the souls with God our Lord, by means of the exercise of the virtues. The warmth and guidance of the Heart of Mary was moving through all the stages of his spiritual life, from the first steps on the path of perfection in the beginning to the most profound peaks of contemplation and union with God. Throughout his journey, the Heart of Mary was for him the temple where he encountered God, the sacrificial altar of his life, the school where he received lessons of the Master highest divine wisdom; it was the moon with its mystique that illuminated his nights, the guide that led him in the desert, the morning star who encouraged him in the long darkness, the rock castle where he would hide from the furious onslaught of the enemy, the oven and fireplace where his love was the model and archetype where he would receive the greatest perfection and likeness with Jesus. All these beautiful metaphors and many other came to Br. Giol continuously from the pen, so as to understand so many ineffable experiences. Even more for Br. Giol, the Blessed Virgin was first and foremost a mother (cf. 2, p. 166s).

His illness and death

If the spirit of Br. Giol had been strengthened and consolidated in these years of trial, his health was seriously affected by various illnesses. As he became weaker, he was reassigned to the White House, a residence-sanatorium which the missionaries maintained in Olesa de Montserrat. Br. Giol spent the last years of his life (1906-1909) in these beautiful surroundings in spite of his extreme weakness, Br. Giol found strength to climb to the sanctuary of Montserrat and say goodbye to the Black Virgin. It was decided that a quiet and peaceful setting might help him with his illness, so he was transferred to the community of Cervera where he died on October 13, 1909.