The witness to martyrdom that so many brothers Claretians have given has to be placed in the context of the Spanish Civil War (1936-1939).

As our missionaries were being told to abandon the school, they were learning of the fate of their brothers from the communities of Castro Urdiales and San Vicente de la Barquera. Several missionaries had already been shot. In the not too distant future, they would join them. 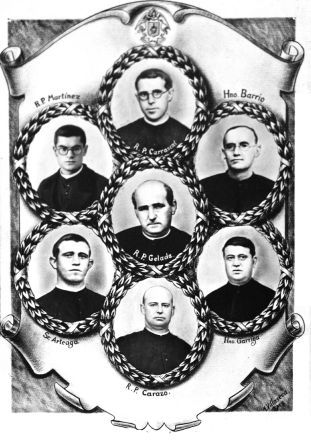 Once arrested, the Claretians were taken to the convent of the Poor Clares, which had been converted into a prison. That same night, the three were transferred to what had been the Claretian school where they were to wait for a car that would transport them from Castro Urdiales and then to the slope of Jesus de Monte.

This completed the painful journey. The militia exchanged our missionaries for other prisoners. The Claretians were murdered by an unknown assailants near Torrelavega, Santander, Spain on October 14, 1936.

To remember the Claretian Martyrs of Castro Urdiales, we want that their death be viewed as the supreme act of generosity. Their last words were forgiveness toward those who killed them and love for Jesus and the Heart of Mary.

Father’s Joaquin Gelada, Isaac Carrascal and Br. Félix Barrio belonged to the community of Castro Urdiales, in the province of Santander.

When the Revolution broke out on July 18, 1936, the Mayor of the city advised the militia to respect to all people, also the Claretians. They continued working in the school until August 18. After that date, all the priests and brothers of the school were dispersed for fear of losing their lives. But there were three who stayed in the school: Father’s Joaquin Gelada and Isaac Carrascal and Brother Félix Barrio.

They would soon be forced to leave the school. They were welcomed and given asylum at the House of the Sacred Heart, run by the Sisters Servants of Jesus of which the missionaries were chaplains. They settled in the gardener house on the estate. Here they were able to live their religious commitment.

These three missionaries, remained united by a common sense of fraternity and also by a strong sense of responsibility, given that the sisters had given them asylum and girls remained in the school. On the other hand, Father Carrascal, who had been the chaplain, did not want to abandon them without any spiritual aid.

The Sisters deserved to be respected by the militias, as most of the girls were daughters of the workers and the militia. The relative tranquility among the sisters and their pupils would soon end. On September 23rd, a chief Republican, accompanied by a former student and other people, visited the School and stated it was dangerous to maintain religious practices with the daughters of the militia. The missionaries responded by stepping up the safeguards. This situation did not hinder Father Gelada when asked to administer the Anointing of the Sick to a person in serious condition.

The three Claretians in residence in the School were learning of the fate of their brothers from the communities of Castro Urdiales and San Vicente de la Barquera.

Mid-morning of October 13th, a flood of well-armed militia arrived and broke into the school. They ordered the three Claretians to be handed over. Father Gelada saw that it was useless to make any attempt to escape. He opened the door of the house and greeted the militia with ease: “Good days, gentlemen. ¡stay calm, there is no need to hurry! Let’s go.” The militia responded: Oh the birds we have already caught.”

The last encounter between the Sisters and Father Gelada, was when the militia allowed him to bid farewell at the School which proved to be emotional. Kneeling, all asked for his blessing.

The three Claretians were brought to the convent of the Poor Clares’. In prison they were not given water. Father Carrascal was taken back to the School, guarded by a militia member to ask the sisters: “They want to know if you would be able to lend me some food and three blankets. If possible, can I receive a loan of 450 pesetas to buy food in the prison canteen of Santander where they are going to take us?” And he added: “Ask God that, if they have to kill us that we die as martyrs. Also tell the girls to make this same plea. From heaven we will pay for all you have done for us.”

That same night the three missionaries were taken to what had been the Claretian school where a car was waiting to take them from Castro Urdiales to the slope of Jesus de Monte. On the way one of the militia beat one of the priests severely. The priest responded with meekness: ‘You can kill me but I won’t deny my faith.”

The driver, a believing Catholic, was forced to drive the car. He stopped at a spot where the three militia told their victims to get out of the car and the driver was told to continue forward and return soon. When he returned, a few shots were heard. The driver thought that they had killed the priests, but the militia had traded them for other prisoners. However, the three Claretians were murdered by an unknown assailants near Torrelavega.

During a new school year, a Sister asked a militant about the three missionaries. He replied sarcastically: “Those three? They are already in heaven!” That militant said it in a joking manner. We know well that it is true.

Remembering the Claretian Martyrs of Castro Urdiales we want to make the memory of their death as the supreme act of generosity. Their last words were forgiveness toward those who kill them and of their love for Jesus and the Heart of Mary.