We can say that the community of Cervera was his first and final destination. Almost all his missionary life unfolded between the ex-University and Mas Claret. 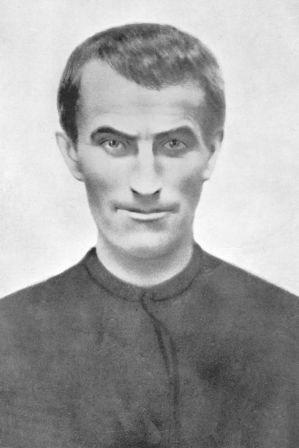 Brother Miguel Palau led an intense interior life. He always tried to live devoted to the will of the Father and expressed an exquisite devotion to Mary. An essential part of his life and in moving forward was to be involved in fraternal sharing, which he found as warm and rewarding, and in particular by his dedication and constancy in his work being technically perfect.

His life and mission

Miguel was a young pious man and not really healthy. Suffering a broken rib he would have a fistula in the chest. When he was 14, he began to work as a mason under the direction of his brother, a master of works. In a short time he contracted a heart disease which caused him to be sick for about three years. Though being physically weak, what was hiding within him was a robust temple. He had a great inner strength and a solid spirituality that after entering the Congregation was an unstoppable form in an intense life of prayer, community life and work as a mason.

When he was assigned to the community in Cervera, the Superior of the community at that time, although doubtful because of the fragile appearance of this young, admitted him as a postulant after being moved by his skill as a bricklayer. After a half-year, Miguel began his Novitiate. This was for him a time of discovery and he tried to live deeply the Claretian spirit drawn on the definition of a Missionary.

Fr. Forcada, his Novice Master, years later would say: “I met him as a novice and as professed, since then I had the joy to be in his company for a period of twelve years, and always saw him in the same manner: fervent, active, observant, obedient and friendly to all.”

Br. Palau recorded his memories when he profess with these simple words: “I had the joy of professing on July 16, 1891, on the anniversary of the foundation of our Institute and the feast of Our Lady of Carmel. The profession group was very large: If I remember correctly, we were no less than about 80 who had the consolation of consecrating ourselves to God…”

The community of Cervera was his first destination. He was assigned as mason along with various works in plumbing, electricity, and others.

His arrival with the Congregation was providential. The Congregation had just purchased, for a period of 100 years the huge building of the old University of Cervera that, after its glorious past, had moved into a regrettable decline. Following forty years of inactivity, the Claretian Missionaries as its new tenants, faced the intense and prolonged restoration and rehabilitation of the building.

It took a little more than a year to remodel the structure so that it could begin accommodating the various priests, students, brothers and novices.

Four years after having purchased the building, Br. Palau joined the community. He quickly took the place of Br. Vilaró by working on the building. At thirty-nine years old, right up to his death, Br. Miguel worked as a mason in Cervera and Mas Claret. He interrupted his stay in the Cervera community only when he was asked to meet certain responsibilities in the houses of Vic, Olesa de Montserrat and Barcelona which was by then the nursing home of the Congregation. He also worked in Solsona and Lerida in building the new Claretian Seminary.

His biographer, Fr Antonio Maria Arranz recalls: “Some forty years have already passed and yet it seems that we see still him… medium height, pale face and lean, steady in his walk, always collected and devoted, the rosary in his hands, and a brightness in his smile which seems to radiate from his lips. He would appear with frequency within the wide and immense cloisters, with his long shirt almost reaching his knees, and carrying the tools of his trade in the direction of his next job.”

His evangelical personality was sketched in the day to day events of life. His days were intense both at work and in inner life. He always tried to remain in the presence of God with a tender love and love for Mary and conscientious in fidelity to work, in fraternal communion and in prayer.

With infallible punctuality to morning prayer, he was seen kneeling or standing, plunged into deep contemplative reflection. The Eucharist was the most important moment of each day. When he finished prayers and after a frugal breakfast because of his stomach problems, he would start his next job. The pace and attitude with which he gave to his work showed an intensity and serenity. “His movements on the scaffold were paused but steady and precise. Posting his thoughts in the presence of Mary, he did not lose a moment. Only to hear the hours the clock lifted up his tilted body. He would then pray slowly the Ave Maria,” says Fr Antonio Arranz. He would offer his work for the Congregation and particularly for the missionaries who from Cervera departed to missions. At noon he would assist in the community spiritual reading. Never was he late to any act of community. “A few minutes before leaving the tools, he would go to the office, clean up, changed his clothes and went clean and neat as if he had never touched mud.” Fr Felipe Calvo truly admired him. On special days he would engage in preparing the tables, helping to serve or to wash dishes.

In the afternoon he would return to work and late afternoon was reserved as sacred personal time. After cleaning and leave the tools for the next day, he went to the chapel to dedicate himself to prayer. His prayers were not many nor complicated, but he would recited them with a contemplative air. In his dealings with others, both with the Claretians as with lay people, particularly with other workers, he was appreciated by his way of being such as welcoming and availability, always exhibiting a serene expression and smiling, with a touch of humor.

His work list was endless. The chronicles highlight something more significant. Above the nursing unit, he built a large living room and a large sunny roof for the sick members of the community. He plastered the exterior walls of that vast building; there was a thousand of meters of piping that need placing in the complex required by the diversity of existing sections; in the orchard he built a spacious and sunny henhouse; he repeatedly cleaned up the six thousand square meters of roofs and the subsequent replacement of tiles and a long list of etceteras impossible to record here.

Normally, he would work alone or accompanied by any Brother novice. It was impressive to always see him busy, quiet and without losing a moment, under the heat of the summer sun and frigid days of winter. This is why on the day of his death, the chronicler noted what everyone knew: “In these thirty-nine years he has served the community as a mason, directing and running, working alone or accompanied by other, all repairs and alterations of the University.”

The Provincial Chapter of Catalonia in 1920, decided to acquire a farm for the community of Cervera, as economic support and a nursing home as place of solace and rest for those needing to become healthy. The Claretians gave the farm the name Mas Claret. As it needed to be restored and to extend the estate house, the Superiors called upon Br. Palau, which by then was in Solsona working on the foundations of the new Seminary.

At the beginning, those who worked in Mas Claret had to return on foot to Cervera. The three hours walk on the road was set aside to offer to God the activity of each day, going in silence, in cheerful conversation or praying of the Rosary.

After having a place as a provisional chapel, Br. Palau undertook the construction of the new wing attached to the old house. It was this new addition, being comprehensive, strong, elegant, where the chapel would be located. On the outer door of the same building, you can still read the commemorative plaque: “Construi aquesta casa el servent de Deu German Miquel Palau vila cmf i els darrers hi visquë anys of Seva life. In recordança: 2 – IV – 1957.”

It was here where they prayed and sang so many times the names of those that would be Claretian Martyrs in Barbastro, in Cervera, and in other communities. In July 1936, when the missionaries were confined in Mas Claret preparing for their own martyrdom, they hid with the sacred objects, an image of the Virgin of Montserrat in precisely the same site where they would be shot a few weeks later.

Being a place dear to the Claretians, not far from the motor house and located a few hundred meters from the house is a generous water well. Br. Palau built a small house of 10 by 15 meters to accommodate the engine for the water well and the tack and tools for the field. Little that he imagined that the good brother would construct for those to be martyred this humble place. In effect, in the summer of 1936, some of the Claretians, then martyrs of Mas Claret, after being imprisoned and mistreated by their executioners, would sneak out at night to that shed to celebrate the Eucharist.

Br. Miguel Palau, after living a life of dedication to his vocation, died with a reputation for sanctity, in Cervera, on October 16, 1929.