Father Jaime Girón, was Superior of the community in Cervera. There were 154 members residing in the house when he recognized the tension of the upcoming Revolution. Plans were being prepared for the evacuation of the community when on July 21, the revolutionaries demanded that the Civil authority have the University building vacated in the matter of one hour. As the militia began taking control of the building, Fr. Giron asked permission to let the missionaries move to Solsona which was close to the French border. 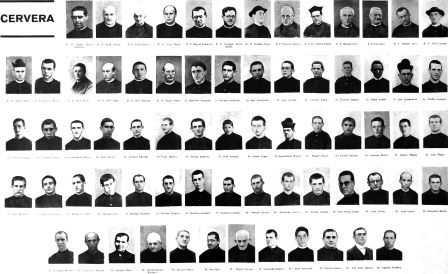 The old University building of Cervera was occupied by the Claretian Missionaries since 1887. In 1936 it housed 154 people: 30 Priests, 35 Brothers, 51 students and 38 aspirants who were preparing for the novitiate. Eleven of these missionaries lived in the Mas Claret, a farm about eight kilometers from Cervera.

Fr Jaime Girón, was Superior, a prudent and vigorous man. With the events taking place in Catalonia, he organized a plan for the evacuation of the missionaries. He determined that the elderly and the sick should be interned in the town hospital. He then divided the rest in small groups to leave Cervera discreetly, without leaving any trace, and to find refuge in families of friends who were trustworthy.

However, the entire plan was upended because on July 21, before Father Superior was able to implement his plan, the revolutionaries were moving throughout Catalonia. In Cervera, they demanded that the town Mayor force the Claretians to vacate the University building within one hour. Father Girón was warned by a friend that the order was serious and to not give any pretext for the militants to cause a massacre. The community convened and the Brothers were given precise orders. They were to distribute and consume the Blessed Sacrament from the house chapels and then take what was most essential before abandoning the house.

The militia arrived at the community house with the order that all inhabitants leave. Father Superior requested that they be moved to Solsona, a town near to the French border. However, half way, in the town of Tora, the Revolutionary Committee of Solsona warned their colleagues that they did not know what to do with those fugitives. The militia were animated by some hotheads, to kill the Claretians, but opted take them to the monastery of San Ramon. Hence the 112 Claretians were welcomed by the monks. However, the next day, warned that the Communists of Calaf, a neighboring town, intended to set fire to the monastery. The Committee of Tora, gave passes for everyone to leave there and flee. Then began the dispersion of the Claretian community by groups.

The majority of the Claretians took the road towards Mas Claret, although only half of those fleeing were able to arrive. In the chapel of Mas Claret, they offered themselves to the will of God the Father and swore to be faithful until death. They prayed an Our Father asking for strength for all those destined for martyrdom. They were warned that not even in Mas Claret they were safe. Effectively, at dawn the next day, July 24, the members of the Revolutionary Committee of Cervera arrived to seize the goods and property. The fugitives who were living there were allowed to remain in the house and to continue with their jobs. Foreign students were taken to Barcelona and delivered to the consulates of their countries, where they would be sent to Italy.

The Group of Lerida

A group of 15 students, guided by Father Manuel Jové, escaped to Vallbona with the monks. After three days of traveling they arrived at Rocafort de Vallbona. Father Jové went ahead to obtain the passes from the Committee, trusting in some friends for help. Two by two, the students were told to enter the town every ten minutes. And so they were doing, but didn’t go unnoticed, and they were all arrested. Father Jové was waiting in house of Mr. Miro for the passes that were being prepared by the Committee of Rocafort, but the militants arrived and took the students. Father Jové, learned that the students were prisoners, so he decided not want to flee, but surrendered voluntarily to join them, aware of the risk to his own life. Locked in a room in Ciutadilla, Lerida, they were treated well by the townspeople and even by the same militia of the area. The Committee of Cervera were unaware of the fate of these missionaries, but those of Lérida, aware that they were prisoners, presented themselves immediately in Ciutadilla to take charge of them. The Claretians were interrogated and subjected to mistreatment and torture: Father Jové was forced to step on a crucifix and was brutally beaten for refusing; a student was forced to swallow a Rosary that he had in his hands; the neighbors clearly heard the blows and punched the missionaries received and the blood they shed.

After being forced to walk seven hours, an authentic Via Crucis martyrdom, they arrived at the gates of Lerida, but those responsible for entry into the city, said that the Committee already had so much work, thus telling the militia to go directly to the cemetery. Under the gaze of many curious witnesses; after refusing to recant their faith and proclaiming that they would die for Christ, they were shot. The barrage of bullets lasted eight to ten minutes.

The martyrs at the Hospital

Another group were the missionaries who had been sent to the hospital. There were 6 Priests, 4 Brothers and 4 students. Among them were Father Superior, Jaime Girón, the economo, Father Pedro Sitjes and Father Juan Buxó, a medical doctor. The first days were relatively tranquil because the hospital was run by the Sisters of the Heart of Mary.

On September 2, to avoid more problems, the Board responsible for the hospital requested that those who were not sick to leave. Father’s Girón and Sitjes left under the guise of the night, and went in the opposite direction. Father Girón was betrayed by a pastor when he approached to ask for a house to hide and was shot at the entrance of the town cemetery of Castellfollit. Father Sitjes, we only know that he was lost and that his body would be found with gunshots and partially burned.

Those who stayed at the hospital had no better luck. Although some were seriously ill or disabled, they were taken from the hospital directly to the cemetery of Cervera, where they were shot. Brother Canals, nurse of the community accompanied them. He did not want to abandon the sick, and the student Buería, despite attempts by his sister to take him to her home, preferred to be a martyr. The killers realized that one of the missionaries was missing. Father Buxó, who had nursed one of them, and as a doctor at the Hospital slept in a separate room. The militants went to get him to settle an account with him for his charitable services.

On August 1, a committee of the Council of Government of Catalonia arrived at Mas Claret to record a search for weapons and money. They took what they could and to two Priests would later be released in Barcelona. The Missionaries of Mas Claret could live a normal life, combining work with prayer and time for community recreation. Each day, however, they received a visit from the militia who came to take the milk, eggs, fruit… and to control the work. Sometimes prostitutes arrived with them to entice the Claretians with poses and insinuations. The Committee demanded more each time, until they began saying there is little work with so many people. On the afternoon of October 19, a photographer arrived with the militia. With the excuse of taking a photo, everyone was gathered in the patio and bound, where 18 Claretian were martyred. Brother Bagaría, survived as a witness of the fidelity of his brother until their death.

The remainder of martyrs and Brother Fernando Saperas

The number of martyrs from Cervera includes 10 other Priests, 7 Brothers and 6 students, most of whom died alone in various places and dates unknown, although some details are known of their imprisonment. The best known and impressive case is Brother Fernando Saperas, a martyr of chastity, by the harsh trials and humiliations to which he was subjected. He was shot in the cemetery of Tárrega. His memory is noted in this calendar on August 14.