The Church gives recognition today to the Guardian Angels, which comes just three days after the feast of the Archangels Michael, Gabriel and Raphael. The Congregation remembers all of the angels (cf. CC 35), of which we have traditionally recognized them as patrons.

They are the carriers of the messages from God which is where the word angel comes from. The belief in the existence of angels and their protective quality of people has been maintained since the early times in the Church and celebrated in the liturgy.

Father Claret professed a great devotion to all the holy angels, particularly St. Michael the Archangel and the Guardian Angels of the people, bearing witness to their protection throughout his life and ministry. 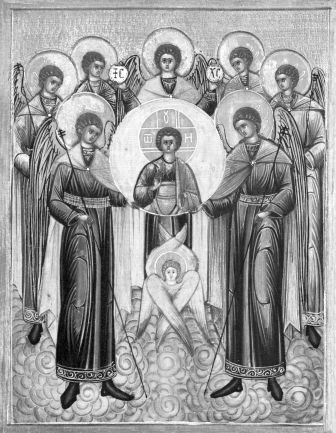 The angels in the history of salvation and in the life of the Church.

The mission of the angels in a nutshell, is to worship God and to fulfill their orders, bringing their message to human beings. Their name indicates precisely this mission to be message bearers from God. In the words of St. Augustine: “The name of angel indicates their office, not their nature. If one questions their nature, I will say that it is a spirit; if one asks what does it do? I would say that it is an angel.”

Supported in Sacred Scripture and tradition, the belief in the existence of angels and its protective closeness in humans has been maintained since ancient times in the Church and celebrated in the liturgy of the universal Church on this date from as early as 1608.

The Catechism of the Catholic Church offers us a synthesis of tradition and doctrine about angels. It affirms that the angels are servants and messengers of God. They contemplate the face of the Father in heaven. They are “agents of their orders, attentive to the voice of His word.” They have intelligence and will. They are personal and immortal creatures. They exceed in perfection to all visible creatures and center on Christ the Lord. They were created by Him and for Him with the mission of assisting those who have inherited salvation. They, from the creation and throughout history, announce salvation and serve the divine plan of His realization: close the earthly paradise, in protecting Lot, saving Hagar and her son, stopping the hand of Abraham, the law is communicated by His ministry, to lead the people of God, announce births and vocations and attend to the prophets (cf. nn. 328-336).

An angel – Gabriel- announces the birth of Jesus (cf. Lk 1:11-26). The angels are those who, from the Incarnation to the Ascension, surround the figure of Jesus, the Word made flesh, as attested by many New Testament texts.

By the mysterious and powerful help of the angels the whole life of the Church benefits. In fact, the Church values their protection, and it is confident that in them rests the guidance of people from birth until death. We celebrate in the liturgy the Archangels Michael, Gabriel, Rafael and the Guardian Angels.

The devotion of our Holy Founder toward the angels.

“I planned on setting up the Religious Press under the protection of Our Lady of Montserrat… and that of glorious St. Michael” (cf. Aut 329). They along with the angels are the patrons of the Congregation founded by Claret. The devotion of our Founder for all the angels is evident in the confession that he makes in his Autobiography when he says: “I never forgot to invoke St. Michael and the guardian angels-especially my own, and those of the kingdom, the province, the city in which I was preaching and of each individual present” (Aut. 268). He adds: “I have had visible knowledge of the protection of the holy guardian angels” (Aut 269).

The Saint testifies to the protection experienced through the angels (along with the protection of the Virgin Mary and of other saints) when he encounters the heaviest persecutions in the midst of his missionary activity. He says: “the Blessed Virgin and the angels and saints, who guided me through unknown paths, freed me from thieves and murderers, and brought me to a place of safety without me ever knowing how” (Aut 464). He implores Mary, Queen of Angels, and her intercession so that she send assistance (cf. Aut 272). It is the same Claret who interprets as help from heaven that which he received in Marseille, on its journey toward Rome being young priest, by a subject who attended him in such a way that, in the words of the Saint, he seemed more like an angel than man (cf. Aut 128).

Lessons from the Angels for our spirituality and mission.

To celebrate the memory of the holy angels’ one is obliged to give thanks to God for being entrusted with their protection. They are present in our lives, invisibly but effectively the providence of God.

At the same time that we give thanks to God and welcome the protection of the holy angels. We should draw some lessons for our life. Being the angels – some- attend at the throne of God, to whom they are worshipping and – other – messengers fulfilling their commands, from them we learn to worship God (contemplative dimension of our religious life) and to give ourselves to the mission that He wants from us (active or apostolic dimension).

The angels act as mediator between God and us and are an example of the service of intercession which many of us must exercise in the life of the Church in favor of our brothers and sisters.

By them being messengers of the plan of salvation of God for all, they help us to perform our mission as evangelizers, in order for us to be bearers of the good news where the neediest are waiting for words of hope.