Due to adverse circumstances in Spain, he went to Rome to be ordained in 1840. While in Rome he would come across Fr. Claret. After his ordination, he would returned to his native land.

As soon as he arrived home, his concerns and unique gifts led him to move in the direction as an itinerant preacher. This ministry led him to reunite again with Fr. Claret. 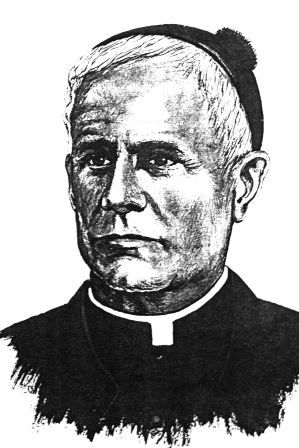 He joined the small group that on July 16, 1849, gave birth to this great ministry. Thus he began his ministry of preaching. On November 1861, he the founded the community of Segovia and represented the community in the first two General Chapters of the Congregation. After the second General Chapter in 1864, Fr. Domingo Fabregas did not returned to Segovia, but went to Vic after becoming frustrated with the foundation of a new community in Huesca.

It was in Vic, where the aftermath of the Revolution of 1868, caused much suffering and forced the missionaries from the Mother House to leave on October 2, and were dispersed in small clandestine communities. With the problems increasing, Fr. Fabregas was forced to leave Vic, Barcelona and move on to Thuir, France. Eventually with Alfonso XII restoring the monarchy, Fr. Fabregas was named Superior of the Casa-Colegio of Gracia in Barcelona.

On Sunday, October 27, 1895, he died. Surrounded by his brothers he peacefully entered heaven.

Domingo Fabregas was educated with care in piety, industriousness and simplicity. His vocation was nurtured in the parish. On October 1825, he entered the Seminary in Vic at the age of eight years old. In that renowned seminary, he met the philosopher Jaime Balmes; Fr. Pedro Bac, -restorer of the Oratory of San Felipe Neri-; the future Dominican martyr San Pedro Almató; and in particular the young man from Sallent, Anthony Claret.

He had to interrupt his studies in 1835, when the liberal militia occupied the Seminary in Vic and forced the students to return to their homes. During this time, Bishop Corcuera died. The Diocesan See was vacant and the authorities banned the ordination of new priests. Against this backdrop, Domingo, not to be discouraged went to Rome to be ordained. He stayed in the convent of San Basilio where, within a few days coincidentally the young priest Claret would arrive.

Ordained on April 18, 1840, he returned to Catalonia, where after helping in different parishes, he shared with Bishop Casadevall his calling to the ministry of preaching. This caused him to renew his friendship with Fr. Claret and collaborate with him in some activities. That friendship encouraged Fr. Claret to invite Fr. Domingo to participate on July 16, 1849, in the Exercises of the foundation of the Congregation in the Seminary in Vic. Thus began for Fr. Domingo a new and exciting history.

A little before starting this new ministry he experienced his first test: an illness caused him to be bedridden all of September 1849, being the first founder to be nursed.

On August 11, he heard the news of the appointment of Fr. Claret as Archbishop of Santiago, Cuba. On December 28, 1850, Claret sailed to Cuba. Father Ramón Muns shared the following story of Fr. Claret’s farewell: “Father Founder said with a sense of humor to Fr. Fabregas: Let’s go, Fr. Fabregas, do you want to accompany me to Cuba? – Father, to the port with great joy, but going into the sea, not that…”

Father Fabregas was admired for his oratories qualities: intelligent, illustrated, a steady voice, clear memory, and ease of expression. During his stay in Thuir, one recalls his talks full of doctrine and very orderly, clear and well spoken. Fr. Clotet called him “a notable preacher for his zeal, simplicity and clarity of ideas.” Fr. Xifré also recalls: “He had an order and method in his concepts and distinguished himself in his moral explanations. His apostolic zeal was already in him before joining the Congregation.”

The Second Superior General of the Congregation, Fr Esteban Sala, died on April 18, 1858. To fill the vacancy at the meeting, Fr. Domingo Fabregas accepted the assignment as General Consultor and in this capacity, he fulfilled his role in Vic.

He participated in the first General Chapter on July 7, 1859 which took place in the house of Gracia, Barcelona. In addition to Father Founder, all the members of the General Government attended. The Superiors of the only three houses of the Institute and one delegate from each community was chosen from among its members. Fr. Fabregas participated as a representative of the house in Segovia.

Fr José Xifré was elected as the new Superior General. Fr Domingo Fabregas was assigned to the foundation of Segovia, where he arrived on November 30, 1861. So began a multitude of missions throughout the diocese, with great pleasure by all. Fr. Fabregas coupled his missions with Spiritual Exercises, of which he addressed to priests and religious.

The second General Chapter took place on July 4, 1864, at the house of Gracia, Barcelona. Fr. Fabregas returned to represent the community of Segovia. When the Chapter ended, he did not return to Segovia but was given the task of founding a community in Huesca. Frustrated with that foundation, he went to the Mother House of Vic to continue his ministry of preaching. It was in Vic where he met with Fr. Claret during his stay in 1865.

Subsequently, with the blossoming Revolution of 1868, the community of La Selva del Campo was assaulted and Fr. Francisco Crusats died as a martyr. In this atmosphere of threats and confusion, on October 2, the Revolutionary Board of Vic ordered to the missionaries to leave the building in twenty-four hours. Fr. Fabregas retired to his village of San Genís de Orís, expecting the worse.

In a moment of calm, the General Government with the Novices moved to Prades in France, while, the rest of the missionaries were gathering in small communities so as to go unnoticed. One of the houses was in Vic, where Fr. Fabregas joined with four other missionaries until the end of 1871.

The First Spanish Republic was recognized on February 12, 1873. This brought about increase dangers and abuses against the people of the Church. So, Fr. Fabregas travelled incognito to Thuir to inform the General Government of the state of things. There he remained until July 1874, and eventually returned to the house in Vic.

At the end of that year, with the monarchy of Alfonso XII restored and the change in the social and religious panorama, Fr. Fabregas returned to Spain and was appointed Superior of the Casa-Colegio of Gracia, in Barcelona.

On October 27, 1895, in Solsona, his death would come as a surprise. Fr Pedro Dern, witnessed the scene and quickly wrote in the house chronicle about the final moments of Fr. Fabregas in this way:

“Feeling sick, Fr. Fabregas, went to the cell of Fr. Minister, knocking at the door, he enters and says: “Father, I’m very cold, and I feel ill.” Indeed, his hands were freezing and the extremities of the fingers were whitish because the blood was not circulating. Both Fr. Minister and the Brother nurse accompanied him to his room and helped him because Fr. Domingo had little strength. It was 6:30, the time in which the Community would make the daily visit to the Blessed Sacrament and the regulation intercessions. Fr. Fabregas wanted to go to the chapel and make his final visit to the Lord in the Blessed Sacrament, and not being able to climb the stairs that led to the choir, he begged Fr. Minister to assist him; but he didn’t believe it would be convenient, and said to him: “Father, you have already made many visits to Jesus in the Blessed Sacrament, now lie down.” While the Community prayed in the choir, Fr. Fabregas stayed in his cell. Entering his room, he had a fulminant stroke. Finishing the visit to the Blessed Sacrament, which lasted about a quarter of an hour, the Brother nurse went to the room of Fr. Fabregas and found him unresponsive and unable to articulate a word or make any signal. The Doctor’s diagnosis found, along with cerebral congestion, a stroke that was invading the whole body. He spent that night in excruciating agony, being comforted with the Sacrament of the Anointing of the Sick. On the morning of Sunday, October 27, at 8AM, Fr. Domingo Fabregas, co-founder of the Congregation, rested in the peace of the Lord surrounded by his brothers.”