OCTOBER 7 – FEAST OF OUR LADY OF THE ROSARY

The Rosary of the Virgin Mary has always been one of the most appreciated prayers in the Christian community for its simplicity and profoundness. Although it is distinguished by its Marian character, it is a prayer centered on the whole mystery of Christ. By focusing on each of the mysteries, it concentrates on the profound message of the Gospel, which is like a compendium. 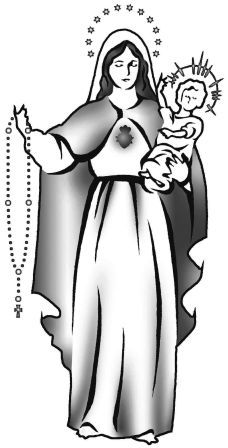 He learned to pray from his family, school, and parish as well in the book El Roser (cf. Aut 45). The Saint never forgot the fervor he felt when reciting the rosary at the shrine of Fusimaña with his sister Rosa. (As a son of his time, -Claret endorses this devotion, which was deeply rooted in Spain in the XIX century). More importantly, he was enliven with the relationship that existed between the rosary and evangelization, which is why he used it as an instrument of his mission. Popular and highly effective, proclamation of the Word, is the best weapon against the enemies of the faith.

In both his life as a young student, and later as a worker in Barcelona, as in his years in the seminary or priest, or in his missionary adventures and in his efforts as Archbishop and confessor, he endeavored not only in practice, but to instill this devotion in everyone. Fr. Claret bequeathed to the Claretians this precious inheritance. Shortly before dying in Fontfroide, he delivered as inheritance to his brothers, in the person of Father Clotet, the Rosary that he had always used in his evangelizing mission, along with the Word of God (cf. Aut 271). This happened on October 12, 1870. The same Father Clotet recalls the words of the dying Saint: “Take my rosaries and save it” (3, p. 832).

Today in remembering Mary in her title of Our Lady of the Rosary, we renew this awareness and this precious practice, bequeathed with interest by our holy Founder.

Claretian devotion to the rosary

By means of the Rosary the Claretian Missionaries, ” venerate with filial love for the Blessed Virgin Mary, Mother of God, associated with all my heart in the saving work of her Son” (CC# 36). The Rosary has been one of the most beloved traditions that the Congregation received from Father Founder (CC, 36 and Dir. 87).

When he was a child, Anthony Claret learned to pray the rosary. He recalls: “When I was a little boy I was given a pair of rosary beads, and I was more pleased with them than with the greatest treasure” (Aut 44). Thus, referring to that period of his childhood, he speaks of “this holy devotion that, after Holy Mass, is the most profitable” (Aut 45). Since then, he would never abandon this devotion throughout his life. This devotion was already in his soul from childhood. The rosary was: armed with the two-edged sword of God’s word (cf. Aut 271).

In the textile factory he would pray three times daily along with the family of workers: in the morning, another toward midday and another one before dinner. “I recited the three parts daily along with my fellow workers, who kept on working as I led them” (Aut 46).

Although it may seem strange, this devotion continued in him despite the crisis suffered in his years as a textile worker in Barcelona. Then at the seminary, he would return to his childhood passions and no longer would cease to be faithful to the assiduous and constant practice of this devotion, from 1833 as a confrere of the Holy Rosary.

Every night in his parish of Sallent, he prayed the rosary with his sister Mary and the servant of the house. In his missions has always led the recitation of the rosary with the people; and he privately prayed the three mysteries. In the church of Santo Domingo in Vic, Fr. Claret wanted to place on Our Lady of the Rosary a heart on her chest to unite and assemble these two devotions in intimate communion, and signify that to pray the rosary, the Christian must do what the Virgin Mary did: meditate on the Word in the heart (cf. Lk 2: 19-51). In the Canary Islands he always prayed in the many missions; and the people accompanied him from one village to another with this prayer.

By teaching this program which continued with his missionaries work during his time in Cuba, he writes: “We rounded out our day by saying the rosary and other devotions” (Aut 610). The image of the Virgin which they adopted for the pastoral letter was the Virgin of the Rosary with the heart on her chest: An image that the Saint had in his office and carried in his missions.

In Madrid, in his spiritual notes appears a general desire and a purpose: “Pray with frequency and fervor the Holy Rosary” (1, p. 626). “To persevere and to advance in perfection,” among other means, in addition to the prayer, the practice of the virtues and the sacraments, he notes “a rosary prayed well,” and asks in his requests of 1868, as grace the “devotion to the Blessed Virgin Mary” (1, p. 582). In 1861, he take this determination: “During the day, visit and receive frequently the Blessed Sacrament, and at night, the Rosary; if it can be, the three mysteries” (1, p. 655).

In his years as confessor of Queen Isabel II, he received several locutions and revelations about the rosary, in which the Virgin entrusted the mission of spreading this devotion. The Lord and the Virgin told him that he “had to be the Dominic of these times in spreading devotion to the Rosary” (Aut 677). Being aware of the fact that the Lord and the Virgin were calling him to be another St. Dominic and seeing in his humility his unworthiness, he stated about the holy rosary: “It is to hope for goodness, piety and mercy of the Blessed Virgin Mary to move one of her devotees and faithful servants to waken the sinful people and to teach them how to pray the holy rosary. Ecce ego, mitte me (Here I am; send me). If you want to use me, the most unworthy of her children, I offer with great promptness and joy, though this one has to pass through many works and suffer death” (1, p. 148-149).

Several times, in successive years, he received from the Virgin and the Lord, the same desire to pray and propagate the rosary that helped to revive the mysteries of Christ and Mary, against the materialist conception of one’s existence, applying the mysteries in “our own lives” (Aut 696).

Aware of being the Dominic of modern times, he endeavored at all times to inculcate this devotion all over the world, both through books and loose sheets of the Rosary -as well as in his sermons.

Father Founder bequeathed to us the Claretians, this precious inheritance. In the year 1865, he had made a will in favor of the Congregation, and therefore for their disposal and acceptance on the part of Fr. Xifré, all his equity went to our Institute.