Manuel Vilaró y Serrat was born in Vic on September 22, 1816. He was baptized the same day with the names Manuel, Mauricio and Joaquim. His family worked in the textile industry. Of four brothers, two became priests and one a Descaled Carmelite. 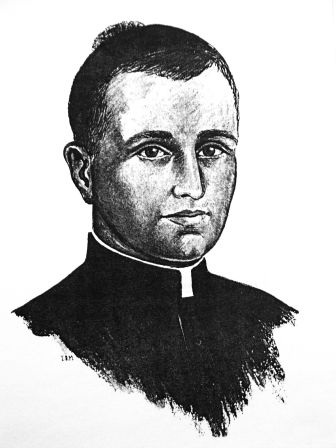 In 1826, he entered the seminary of Vic. We do not know the date of his ordination or his first ministerial assignments, but in 1846 he preached missions, along with Fr. Claret, in the diocese of Tarragona. Interrupted because of political unrest, the missions resumed in 1846 and concluded in February, 1847, one of the most successful mission campaigns in the history of Catalonia. Claret describes Vilaró as a very good man, hardworking and a good companion during the missions.

It is possible that Claret and Vilaró preached missions together until Claret left for the Canary Islands. At any rate, in late 1847, Vilaró became interim administrator of a rural parish near Manresa, Barcelona, and five months later pastor of San Martín de Sesgayoles, where he remained until mid-1849.

Fr. Vilaró was one of the first Claret invited to be part of a new congregation. At just 33 years of age, Fr. Manuel did not think twice, and on June 29, 1849, he resigned from his parochial duties and immediately left for Vic. On July 16, he huddled in a humble seminary cell with five others for the founding of the Congregation. Fr. Clotet, chronicler of the event, wrote: “We gathered at three in the afternoon… Mosen Antoni Claret said: “Today we begin a great work.” Fr.Manuel Vilaró, with a festive air and a smile, remarked: “What can we do, being so young and so few?” “You will see,” replied the servant of God, since if we are young and few, the power and mercy of God will shine all the more”(4, p. 122).

When Claret was named Archbishop of Santiago, Cuba, a number of people chose to accompany him. Although his departure was a blow to the new Congregation, Claret did not hesitate to ask that Vilaró be allowed to accompany him.

The party set sail from Barcelona at the end of 1850. The trip turned out to be like every mission, except that it took place on the high seas. Everyone, from the captain to the servant boy and all the passengers approached the confessional and received the Eucharist with great devotion (cf. Aut 506-509).

In Cuba, Archbishop Claret undertook a series of missions, which ended only with his leaving Cuba more than six years later. The episcopal residence became a mission house, from which preachers, promotors of human dignity and culture fanned out over the island.

Fr. Vilaró was Claret’s trusted and an inseparable companion. Claret himself trained evangelizers, preached the Spiritual Exercises to the clergy, and remained on the go, visiting every part of the archdiocese, no matter the climate or opposition, as if he were still an itinerant preacher from Catalonia. Fr. Vilaró remained at his side, in spite of his duties as episcopal secretary

In February 1852, Claret and his missionary band set out for Holguín. According to Claret’s biographers, a religious revolution was afoot. From Holguín the band attended the surrounding towns. On March 20, when Vilaró had to return to Holguín to attend to several urgent matters, he was caught in a downfall, which seriously affected his health. He returned the following day to accompany the Archbishop, but his health was already seriously compromised. Ten days later, after no let up from his missionary duties, they all returned to Santiago because of Fr. Vilarós poor health.

By April, 1852, Fr. Vilaró could no longer accompany the Archbishop on his missionary tours, nor fulfill his duties as episcopal secretary. In May, he sought treatment. The doctor, while unable to provide much relief, was moved by his patient’s faith in God and asked to be baptized.

The ocean crossing was hellish. When he finally arrived in Vic in mid-August, he was unable to walk and, in fact, would never walk again. Rather than be a burden to the few missionaries of the Congregation, he went to stay with family. He told Fr. Federico Vila: “I was attended by missionaries of mercy…Not a day went by that I didn’t receive a visit from Fr. Esteban Sala, Fr. Josep Xifré, Fr. Jaume Clotet or the other co-founders and priests who lived in our motherhouse ” (5, p. 376).

Fr. Vilaró lived a short but intensive life. He was blessed to encounter Fr. Claret and to discover his missionary calling. Claret described him as “quite educated, virtuous and very zealous.”