Born in Seva, Barcelona, on January 5, 1831, Francesc Crusats studied at the seminary of Vic, and shortly after his ordination to the priesthood on September 18, 1858, joined the Congregation of Missionaries, Sons of the Immaculate Heart of Mary, at the mission house of La Merced in Vic. Fr. Crusats attributed his vocation to Fr. Josep Xifré, who had preached a retreat to the ordinands, the reputation of the fledgling congregation and Fr. Brossosa, a close friend who had entered the Congregation. Fr. Brossosa told Fr. Crusats all about the Mission House of La Merced: the fraternal spirit, the atmosphere of piety and devotion to study, and the preaching of missions. Fr. Crusats could not resist. 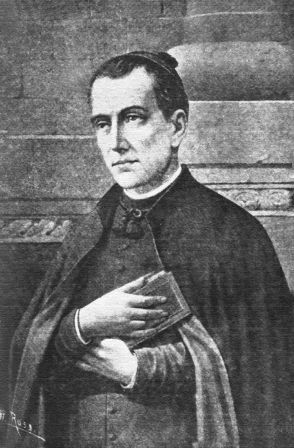 Fr. Crusats spent nearly a year at La Merced. In 1859, he was sent out to preach and, over the next two years, he preached in ten towns throughout Cataluña. A mission lasted fifteen to eighteen days with both morning and evening services. Fr. Crusats celebrated Mass, heard confessions, preached, visited the sick, and taught catechism and morality to adults as well as children and young adults. Hundreds returned to the sacraments. Scrupulously faithful to the spirit and style of Fr. Claret, Fr. Crusats’ impact was as impressive as Fr. Claret’s.

Indeed, his serene and genial personality endeared him to people, and he was regarded as wise for his age. Fr. Crusats was especially attuned to the needs of children and younger people, who welcomed his down to earth, animated way of speaking. He never failed to come across as a missionary on fire with love of God and love of the people entrusted to him. It was no time before people were calling him St. Crusats.

In 1861, Crusats was sent to Segovia, from where over the next seven years he preached twenty-seven missions throughout Castilla with results, the likes of which he had seen in Cataluña. Though by now a weathered missionary, Fr. Crusats continued to respond generously to those, who sought him out from near and afar – like Jesus.

The Spanish Revolution of 1868, the so-called Glorious Revolution, would bring an end to the missionary labors of Fr. Crusats, recently assigned to La Selva del Camp, Tarragona, to preach the Spiritual Exercises to recently ordained priests of the diocese and to serve as spiritual director of the Congregation of Luises, a burgeoning youth movement. In September, 1868, the royal family was exiled, and members of religious communities expelled.

The Claretian house was attacked, but all the members of the Claretian community, except Fr. Crusats, managed to escape. He was beaten and shot to death on September 30, 1868. The inscription on his headstone reads: “distinguished for his simplicity of spirit and zeal for the salvation of souls.” He died young. His cause of beatification has been introduced.

A few weeks earlier, Archbishop Claret had prophesied the martyrdom of Fr. Crusats. “He will go before me in the glory of martyrdom,” Fr. Claret said (5, p. 1,298).

Following Fr. Crusats’ death, Claret wrote Fr. Josep Xifré on October 1868: “Let us give thanks to God because the Lord and his Most Holy Mother have deigned to accept the first of the martyrs. I wanted to be the first martyr of the Congregation.” 5, p. 1,297). This is from the beatification of the Claretians from the seminarians martyred at Barbastro, and shared by John Paul II.