Today we remember the Servants of God Fr. Manuel Casals and his companions, martyrs of the community of Sabadell, Barcelona, Spain.

In the summer of 1936, the community of Sabadell numbered eleven missionaries, most of them elderly, dedicated to the spiritual life, liturgical ministry and hearing confessions. Of the eleven, seven were martyred that summer: Frs. Mateo Casals, the Superior, Joan Torrents, Josep Puig y Josep Reixach and Brs. Joan Rafí, Josep Cardona y Josep Clavería. 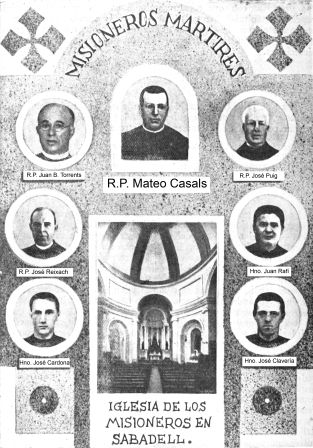 The shock wave, which originated in Barcelona the night before, reached Sabadell in the evening of July 20. That afternoon, after celebrating Mass and leaving the keys of the church at the foot of the image of the Heart of Mary, the community dispersed and sought refuge with family or friends. That night ten churches and convents, including the church of the Heart of Mary and the house of our missionaries were burned.

We do not know why Fr. Reixach returned home that evening. Could he have been unaware of the danger? He was surprised by a group of arsonists, who forced him to show them the house, but amid the confusion he was able to slip away and find refuge in the home of friends. Once there, he told them that, if he was pursued, they were not to deny he was there. “Praise God, I will be martyred along with the others.

At two in the morning four days later, Fr. Reixach was arrested, taken into the street and shot, but he did not die. Critically wounded, barely able to crawl, he made it to the House of Charity, by then exhausted and almost unable to speak. Refusing to identify himself or name his attackers, and attempting to conceal his pain, Reixach thanked those trying to clean his wounds and repeated: “My God, I’m sorry … My Mother, do not leave me …!”

The Red Cross was called. When the Mayor of Sabadell, a judge and armed militants showed up, Fr. Reixach told them: “If you are the ones who shots me, I forgive you with all my heart. I want to die like Jesus, who forgave those who crucified Him.”

The judge ordered Fr. Reixach to be transferred immediately to the clinic of Our Lady of Mercy. There, he asked the nurse if she was a religious sister or nurse. “…I’m so glad, sister! I’m going to heaven. There I will pray for you.”

Surgery failed and Fr. Reixach expired within a few hours on July 21, 1936. Seeing how he endured pain without complaint and murmured prayers until he lost consciousness, those attending him believed they had witnessed the death of a saint. He was 73 years old.

Because of advanced age and being nearly blind, at the outbreak of violence Fr. Joan Torrents was treated with urgency. On July 19, he was taken to the coastal town of Premia de Mar, but within a week his nephews decided it was too risky to remain there and went looking for a safer place in Barcelona. Unfortunately, for almost a year he would have to move from one place to another. One can only imagine the pain and insecurity.

One thing kept Fr. Torrents’ dream of survival alive: praying the rosary without ceasing. With few distractions and few visitors – only a Claretian and a few who knew his hiding place– he used his time to pray the rosary without ceasing. Anyone who came to visit was told: “Wait until I finish this decade.” This Son of the Heart of Mary lived in perpetual prayer, every day breaking his own record of fifty to one hundred and eighty-five decades of the rosary in one day.

The aged fugitive went unnoticed until February 13, 1937, when Barcelona was bombed by allies of the Nationalists. Fr. Torrents took refuge in an underground shelter where, it appears he was recognized by neighbors. Three days later, he was arrested.

At his trial, the damning charge was: “This is one of Father Claret’s escapees.” Fr. Torrents replied with a slight nod and was immediately taken to San Elia prison, where nationalist prisoners were in shock as a result of the mass murder of comrades in retaliation of the February 13 bombing. From there he would be taken away to die on March 17, 1937.

Father Mateo Casals and the other members of the community were executed on September 5, 1936. In the midst of the chaos of July 20, the Claretians sought refuge in the homes of relatives and friends. But it being all but impossible to go undetected in Sabadell, some struck out on their own, hoping to find safe haven in Barcelona, in the midst of tremendous confusion.

For reasons unclear, the revolutionary committee seems to have had intelligence about the missionaries’ movements. On August 4, all were plucked from their hiding places and jailed: Fr. Mateo Casals, the venerable Fr. Josep Puig, fifty years a priest, Brs. Josep Clavería and Joan Rafi, both close to seventy years old, Brs. Josep Solé, still working full-time, and Josep Cardona, only 20 years old.

The Claretians shared the cramped jail with eight young Piarists of their acquaintance. All were treated fairly and allowed to follow a routine very similar to their accustomed regimen, including the spiritual exercises, reception of the Eucharist on First Friday, and the novena in honor of the Heart of Mary. Fr. Puig told a visitor: “We are well, and it’s as if we were at home …” However, as the furor outside the jail increased, the religious were told to limit their religious observances.

Life in jail was serene and carefree. In fact, there seemed to be reason to hope, since some recently arrested priests had been released, and Frs. Casals and Puig were given a hearing with a view to being released.

Then, the evening of September 4, armed men broke in and seized the prisoners. In groups of four, the prisoners were hauled away in different directions. The captives offered no resistance.

At dawn on September 5, the prison was empty, and along nearby roads lay the bodies of our brothers along with some others, seventeen in all. The remains of our brothers rest in the church of the Heart of Maria in Sabadell, Barcelona.

All gave their lives as martyrs: faithful, united as brothers, silently and prayerfully in the peace of those who die in the Lord.