First Week on the Consecrated Life in Indonesia. 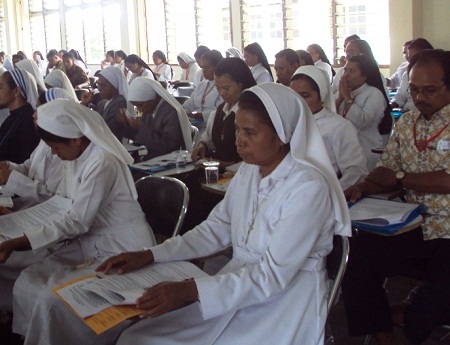 Indonesia-Timor Leste. For the first time, the Independent Delegation of Indonesia-East Timor organized a week of study on the consecrated life for men and women religious in this area where the Congregation has a presence.
Taking advantage of the availability of Fr José Cristo Rey García Paredes, cmf, the Delegation ventured to oorganize this event in three locations under the slogan: “Mysticism and Prophecy: the awakening of religious life in the XXI century”.

Three days in each location, with the added benefit of the participation of bishops and other qualified people in the area, with the inclusion of two young Claretian missionaries who had recently completed their studies in Europe: Frs Yohanes María Vianney and Agustinus Supurt.

The programmes were slightly different, given the special features of each place and the requirements of both the religious and the Bishops who were present.

The response has been very positive and the Congregation has been congratulated for being able to organize this event in which more than one hundred monks and nuns have participated in each of the locations.

Also worth mentioning is the impact it has had on their own Delegation as a special occasion, promoting a continuation of formation for its members. Excluding the novices and some other isolated cases, virtually all of the Delegation participated in this activity, including the postulants.