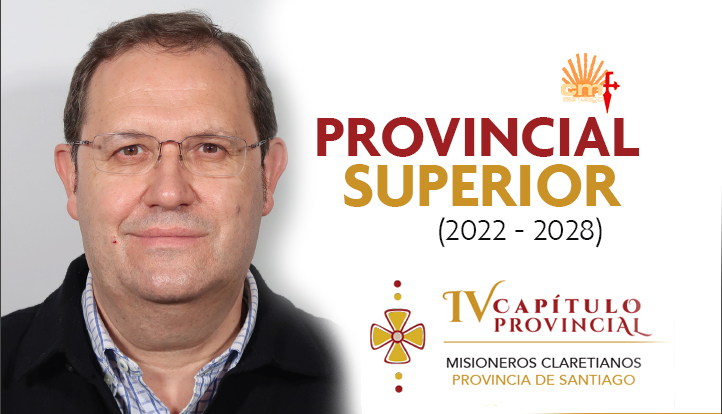 Madrid, Spain. At 7:28 p.m., the Claretian Missionaries of the Province of Santiago, gathered in the Chapter hall, have elected Fr. Adolfo Lamata Muyo, CMF as the new Provincial Superior for the next six-year term (2022-2028). Prior to this moment, Fr. Adolfo was acting as Major Superior due to the election of the former Provincial Superior, Fr. Pedro Belderrain, as a member of the General Government.

Fr. Adolfo Lamata Muyo was born in Aranda de Duero (Burgos) on December 10, 1965. As a student of the Claret School of this city, he entered the Minor Seminary of Segovia when he was about to begin high school, and continued until he began his novitiate year in Los Negrales (Madrid) in September 1983. He made his first profession a year later, on September 8, 1984, feast of the Nativity of the Virgin Mary. After his novitiate, he went to Colmenar Viejo to study philosophy and theology. On June 29, 1989, he made his perpetual profession.

In September 1990 he was assigned to the Immaculate Heart of Mary Parish on Ferraz Street in Madrid. While in the capital, he studied for a degree in Psychology at the Pontifical University of Comillas and collaborated in the youth ministry of the parish. His formation culminated with his ordination to the priesthood on May 22, 1993 by Bishop Luis Gutiérrez Martín, at that time Auxiliary Bishop of Madrid.

After completing his degree in Psychology, he was assigned in September 1995 to Segovia as a teacher and pastoralist. In 2001 he moved to Aranda de Duero as director of the school until 2006, and from 2007 to 2014 he was in charge of Claret School of Segovia. In this last period, specifically in 2011, he became part of the Team of Titularity of the Schools of the Claretian Province of Santiago. He was also vice president of Catholic Schools of Castilla y León, patron of the EDUCERE Foundation, as well as collaborator with social actions and development cooperation with the PROCLADE Foundation, promoted by the Claretian Missionaries, for more than twenty years. He is also currently President of PROCLADE.

Since February 23, the IV Provincial Chapter of the Claretian Province of Santiago has been in session at the Claretian House of Spirituality in Colmenar Viejo.

The Chapter is expected to conclude on March 1. Tomorrow, March 27, the other members of the Provincial Government for the next six-year term will be elected.