Fr. Xabier Larrañaga Oyarzabal CMF – Consultor to the Congregation of Institutes of Consecrated Life and Societies of Apostolic Life 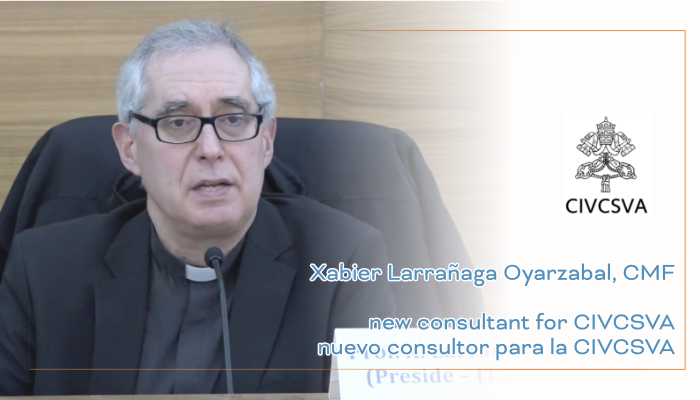 Rome, Italy. On 10 April 2021, Pope Francis appointed Father Xabier Larrañaga Oyarzabal, CMF, Director of the Claretian Institute of Theology of Consecrated Life –Claretianum– in Rome, as a consultor for the Congregation of Institutes of Consecrated Life and Societies of Apostolic Life (CIVCSVA).

Together with him have been appointed Mª José Tuñón Calvo, ACI, director of the secretariat of the Episcopal Commission of Consecrated Life of the Spanish Episcopal Conference; Elsa Campa, prioress of the Carmelites of Alba de Tormes; Elsa Campa Fernández, OCD, president of the Federation San José Castilla-Burgos and the priest Alejandro Arellano, dean of the Tribunal of the Roman Rota.

The appointment, published in the Bulletin of the Holy See, will be for a period of five years and its competencies will extend to all aspects of consecrated life: Christian, religious, and clerical life. This Dicastery deals with the regime, discipline, rights, and privileges of institutes of Consecrated Life (religious orders and congregations, both male and female, and secular institutes). In addition, CIVCSVA is also competent for matters concerning the eremitical life, consecrated virgins, and associations, and new forms of consecrated life.

Fr. Xabier Larrañaga has been a member of the provincial government of the former province of Euskal Herria as Prefect of Formation and Provincial Secretary in two six-year terms. In September 2010 he was appointed by the General Government to the Claretianum in Rome. Fr. Larrañaga has exercised his pastoral work in teaching (both college and university), in the pastoral care of children, youth, and vocations, as well as in the area of formation.

We congratulate our brother and ask for him the spirit of wisdom in the mission that the Pope has entrusted to him.