The Basilica of the Immaculate Heart of Mary Celebrates 60 Years 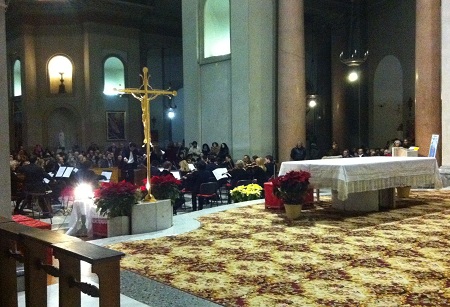 Roma. On Saturday the 7th of January the first commemorative act of the 60th anniversary of the consecration and inauguration of the Basilica of the Immaculate Heart of Mary in Rome was held.

The celebration program began with a visit and meditation before the “Poly-scenic Manger,” a “Bethlehem” mounted in one of the rooms in the basement, which originally served as a church. This “crib” was built about forty years ago by former Claretian Brother Fulgencio Martinez, supported by a team of students at the time, and has won several awards for its originality.

Afterwards a snack was offered in the courtyard of the Church; and then, in the Church itself, after some speeches, a concert was performed by the orchestra “L’armonica Temperanza” directed by the young master, Lorenzo Porzio, official organist of the Basilica.

Notable among those in the audience, estimated at approximately 500 people, were: Cardinal Elio Sgreccia; the Mayor of Rome, Gianni German; Fr. Gonzalo Fernández, representing the General Government; Father Franco Incampo, Major Superior of Italy; Fr. Vincente Sanz, current pastor and Rector of the Basilica, as well as various Claretians from the City and other priests and religious.

The Basilica of the Immaculate Heart of Mary was consecrated on December 7, 1952 by Cardinal Clemente Micara, 24 years after the laying of the first stone in July 1924.