The Province of Santiago: Committed to Migrants 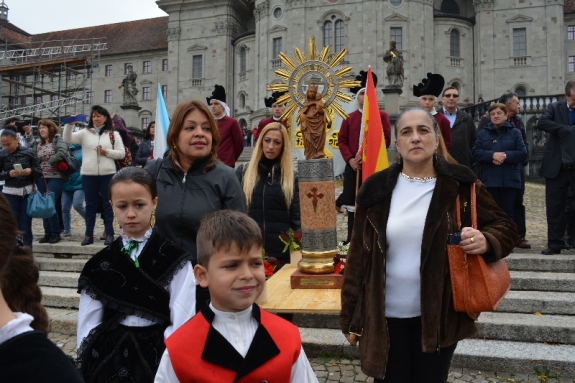 Emigration, in the history of mankind, is not new. Whole cultures have seen a shift in the foundation of their identity. The same history of the Jewish people sees its origins in a “wandering Aramaic” that leaves its land, of a people in exodus that looks for the promised land. Consider also our Christian era, which begins in the Galilee of the Gentiles, the Galilee of the emigrants, and is linked to a woman giving birth in a stable on the way to register.

Migrating is not new. What is new today are the motivations. Motivations that, like the recently deceased philosopher Zygmunt Bauman says, are given “by the impact of a global forces that deprive them of their livelihood, and force them to move out if they will not perish.” The truth is that then each one has to do with those new circumstances from where he must re-learn to live in different and strange states. Sometimes, hostile. “Facilitating the integration of immigrants is the reason for our Parish,” says Fr. Arturo Muiño, cmf, at the head of the Spanish-speaking Parish of Paris. “We have been here more than a century since King Alfonso XIII bought this convent of Discalced Carmelites to convert it into a Spanish Mission, at the service of all those who came from a Hispanic country, and not only from Spain.” In this same line, Fr. Juan Carlos Rodríguez, cmf, director of the Catholic Mission in Spanish Language in Zürich: “Normally, our Mission is one of the first places of contact”. Coexistence, mutual enrichment and common learning is also a possibility that opens up in these societies and their neighborhoods, their organizations, their time and leisure. “For this,” adds Rodriguez, “we also have the social work of informing, guiding and referring to public or private institutions in the country where we are located. We also offer a small job and housing exchange to connect people who are looking for and those who offer jobs and homes. ” In 2016, from the Mission in Switzerland, about 250 people were attended.

From the integration and its consequences for the support of the migrated family, Fr. Agustín Sánchez, cmf, parish priest of Nuestra Señora de la Aurora and Santo Ángel, speaks in the Madrid neighborhood of Vallecas. The Claretians, from here work from the opposite perspective, that is, welcoming those who leave their own country to settle in ours, through the service of Caritas in the parish. They cater to a group of diverse origin, but Moroccans, Africans, Syrians, and even Indians prevail. “With anyone who talks about these issues, you will agree that here, integration, today, is not easy to achieve.” We start from the fact that living in environments of such plurality is not easy. Moreover, coexistence, on occasion, is threatened by multiple conflicts. Despite this, the Claretian community of Vallecas, continues to support families in their contradictions, and in their complex tasks, reinforcing, for example, networks of collaboration and coexistence: “we have works in common: support classes, literacy, courses to through SOIE, preparation and updating in their profession … “. For these Claretian brothers, talking about migrations is not the result of an object of observation or study that can be done from the outside, but it is an act that starts from direct contact with those who suffer this phenomenon. Father Arturo Muiño emphasizes that despite everything, his tasks do not differ too much from those of any other parish: “any emigrant has the right to have his own parish”, although he clarifies: “we embrace beyond the sacramental: we have a Social Service that two days a week opens its doors to offer the work they send us, there is a parish wardrobe, or a psychological service. In addition, daily there is a priest in whose office you can process multiple issues and we also offer French classes for migrants, taught by native volunteers. ” Father Juan Carlos adds, from the Mission in Switzerland, that “believers, for their part, also show interest in pastoral activities, participate in religious services and little by little some of them join one of our groups” .

Diversity of changes that drive migrations

As happened between countries of Central Europe in the decade of the 60 and 70 of the last century, immigrants who today sought to prosper within the EU have come to stay permanently. The adaptation effort has been hard, the children are in schools or in training period, and many families already have the nationality corresponding to the country of residence, which gives them a passport to move more freely. The prospect of returning to their countries of origin, even if they begin a state of economic takeoff-think of some countries in Latin America-is not usually very promising. All of this means that most of them are betting to establish themselves waiting for better times, or to start again in another EU country. This type of change has also had to be faced from the Mission in Zürich, where they tell us that “the majority are Latinos with a Spanish passport. People who come in search of work and housing, people with little education and who have been fleeing the crisis in Spain “. In the same way, Fr Muiño, from Paris, adds that “the European emigrants have been less in the spotlight of the problems. The problems are less for them than for the Americans – mostly from Colombia, Venezuela, Mexico or Peru … – since belonging to Europe protects them. In any case, in France, fear is also a concern, and that it has been able to increase barriers with immigrants from Islamic countries. Above all, the tragedies of the terrorist attacks have been so recent. “

For the Catholic Church remains the care of one of its greatest treasures, which is present in the most vulnerable, as Pope Francis wrote in his message for the World Day of Migrants and Refugees for this year. There is still much to be done so that this imbrication of migrants is favorable to all.