The Year of Faith” Has Begun 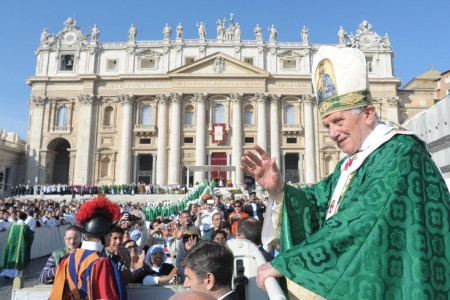 Roma. On Thursday the 11th of October in St. Peter’s Square Pope Benedict XVI presided at the solemn Eucharist in which he initiated the “Year of Faith”. The objective was to celebrate the 50th anniversary of the opening of the Second Vatican Council and the 20th anniversary since the publication of the Catechism of the Catholic Church.

Among the Claretians present at this celebration were Fr. Josep Abella, CMF, Superior General, and Bishop Juan José Pineda, CMF, participants at the XIII General Assembly of the Synod of Bishops. Also concelebrating with the Holy Father were Cardinal D. Jose Saraiva Martins, CMF and Mons. Rubén Gonzaléz, CMF, Bishop of Caguas in Puerto Rico. A numerous number of Claretians living in Rome also participated in the celebration.

At the beginning of this Year of Faith, in missionary communion with the whole Church, let us bear in mind the exhortation of our Constitutions: “While our missionaries need all virtues, they must first of all have a lively faith, in order to be able to respond to their own vocation. It was faith that burned in the prophets, the Apostles and the martyrs, and it was faith that led so many preachers of God’s word gladly to accept poverty, self-denial and sacrifice in the cause of spreading Christ’s kingdom.” (CC62)