Towards a Claretian Restructuring in Europe 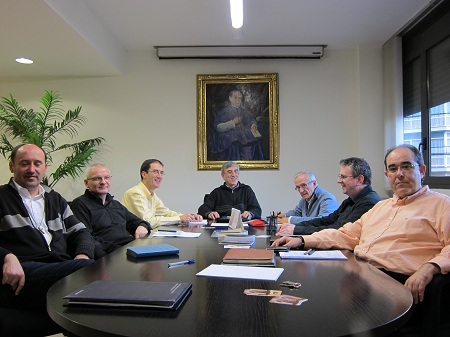 Barcelona, Spain. On Saturday the 21st of January at the Provincial Curia of the Province of Catalunya members of the preparatory commission for the restructuring of Europe met with Fr. General.

The commission is made-up of Frs. P. Paul Smyth and José-Félix Valderrábano, Vicar and Secretary General; Joseba Kamiruaga and Manuel Tamargo, Provincial Superiors of Euskal Herria and Santiago representing the Confederacion of Iberia; Krzsystof Gierat and Stefan Wolf, Provincial Superiors of Poland and Germany, representing the Conference of the CEC.

After evaluating the meeting held last November in Wroclaw (Poland) and sharing the responses made by the Provinces and Delegations of Europe, the Commission centered on consolidating the objectives to continue with the process for the rest of the year and the activities necessary to put them in motion.

The Commission considers it important in the coming months to inform the European Claretians as to the reality of the Congregation on this continent, and to deepen an understanding of the socio-religious reality it is living, in order to identify what the pastoral priorities of the Congregation should be in guiding the way we organize ourselves.

The Commission spent time for the preparation of the meeting which the Major Superiors will have in Autumn of this year.