A comet has illuminated Rome 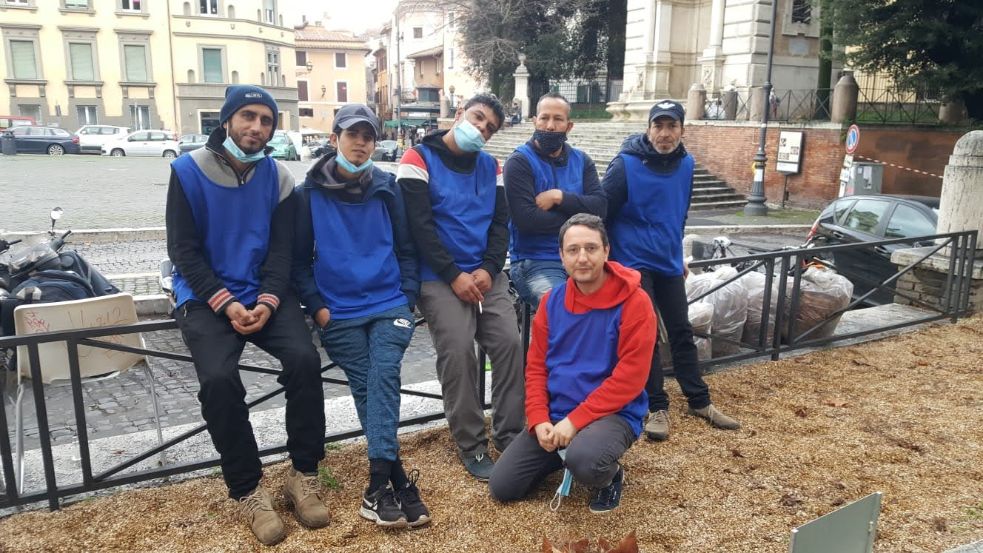 A blue shirt and the desire to feel useful and part of a city where they often live on the margins. Yassine, Moussa, Riadh, Humid, and Hany are the five young immigrants that Fr. Vittorio Bruscella, cmf, involves in a project of social reintegration by picking up leaves in the squares and gardens of Rome. “It is not a simple ecological initiative or urban decorum, but a radical fraternity with and for those who live on the margins, consuming space and time, never the protagonists of anything”.

Since last December 7, the five young people – four North Africans and one Kurdish – “whose faces are marked by difficult life stories that make them look old and tired“, have been busy cleaning a green space in the city. This project, which lasts a couple of months, is financed by the Apostolic Charity: “With Cardinal Konrad Krajewski, the Pope’s almoner, whom I approached to give shape to my idea, we established a congruent daily amount, which allows the boys to eat hot meals and even some cigarettes.” The proposal, which in agreement with the Municipality n. I of the City, we have called “Community Project“, entails some educational purposes. “Because these poor people, if they are such, it is also because they lack communicative and relational competence“. They are asked to be punctual and serious about their commitments; to respect rest days; to work as a team; to deal together with possible problems that may arise; to value personal qualities; to acquire new competences. Two preconditions have determined the selection of the five young people: no alcohol dependency and no state subsidies.

Father Vittorio, engaged in a mission in Canada, in Montreal, had returned to Italy last March for a period of study of English and clinical controls, but then the Covid-19 pandemic forced him to stay in his community in Via dei Banchi Vecchi.

This is how he got to know “the homeless people who during the day stand on the steps of Piazza della Chiesa Nuova, and at night sleep under the Amedeo Bridge, near the Tiber“; with them the religious established day by day “a relationship of trust and alliance” that proved effective in organizing the “work team“, where the primary desire “is to bring the love of God, just as Jesus taught us. Translating the Gospel into very concrete acts, illuminating his life so that each one can say to himself “I am worth! I am capable of doing good for others”. It will be like the light of the comet that guides to the Mystery of the Incarnation in this time of Advent, even if only for a moment!”