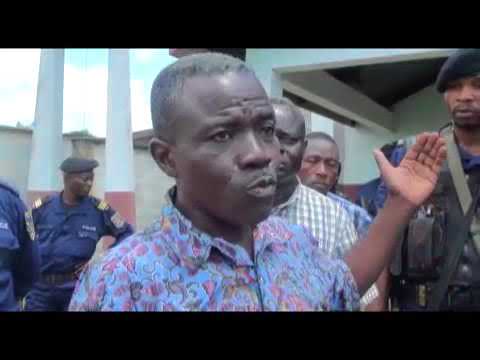 Mitendi, Dem. Rep. Congo. The night before yesterday (from the 14th to the 15th), well-armed robbers (bandits) entered our parish: Our Lady of Fatima in Mitendi. It was around 2:00 in the morning. They began by vandalizing the cooperative’s office and that of the parish. Having found nothing, they decided to seek booty from our brothers. They first went to Fathers Crispin Kudiakusika and Guy Paka, parish priest and superior of the community respectively. To intimidate our brothers, they first fired two shots in the room of the first who finally opened the door. It is first the room of Father Crispin they searched and after the room of P. Guy. They took with them, Computers, Television, small suitcase and money. The police came soon after, but the package was already committed.

It was at this moment that we were notified by the patrol police to see if we could find some stolen effects. We then saw our TV set and a radio. These clues confirmed that they were the ones who were in Mitendi.

All the police authorities, starting with General Kasongo, himself, and the territory (Le Bourgmestre and his deputy) came to visit our brothers. General Kasongo made the commitment to grant two police officers each day to the parish and the community. This is the video that circulates in social networks.