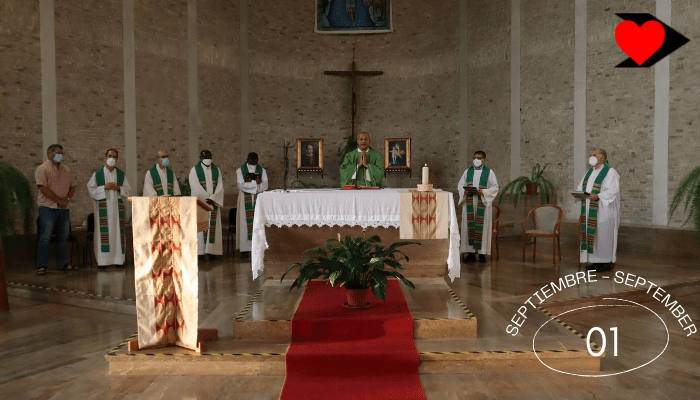 Nemi, Italy. September 1, 2021. A new month dawns and with it our prayer becomes a melody to begin a day dedicated to the election of the consultors and prefects who will accompany our Superior General during this six-year term.

Our confreres of the Province of Deutschland prepared and led the morning prayer on the care of our common home, reminding us that, for our Orthodox brothers, in fact, the ecclesiastical year begins on September 1 with the commemoration of the creation of the world. Thus, we Catholics, too, have been invited to dedicate time to the care of creation during the month of celebration that begins on September 1, the Day of Prayer for Creation, and ends on October 4, the feast of St. Francis of Assisi. We also celebrate this day the birthday of our brother Emmanuel Linus Olowo, of the Delegation of West Nigeria.

Already in the chapter hall, the Word of God began illuminating the election day with the proclamation of the Gospel text of the election of the twelve apostles. The presiding table was composed of the Superior General, Fr. Mathew Vattamattam, the vice-president, Fr. Gonzalo Fernandez, and the secretary, Fr. Joseba Kamiruaga. After approving the minutes of the previous day, the chapter assembly proceeded to the election of the governing council for this six-year term, according to the order established by the president.

With the presence of the seventy-six capitulars in the hall, the numbers of our Constitutions and of our Directory that concern the election and acceptance or not of the office on the part of the elected Claretians were read. In addition, a space was given for the Claretians present who had received the most votes in the previous day’s poll to express, according to their will, if they had any reason or impediment for not accepting the office in case they were elected by absolute majority.

With the due measures, the counting of the votes, the consultation and formal acceptance of those elected by the will of the chapter assembly, the consultors and prefects for the sexennium 2021-2027 are the following:

All the capitulars showed their joy and congratulations to the new general government with a loud applause and then thanked our brothers with a similar gesture Fr. Artur Teixeira and Fr. Gonzalo Fernández for their services to the mission and to the life of the Congregation during their respective terms, the former for six years and the latter for eighteen years in the General Government.

After noon, the capitulars discussed the proposals of the precapitular commission on interculturality and mission. Then, during the Eucharistic celebration, presided over by the Superior General and his council, we thanked the Lord for this new government that will continue with the processes already initiated by the previous government. Also before the final blessing, Fr. Mathew Vattamattam announced the confirmation of Father Joseba Kamiruaga as Secretary General and the appointment of Father Henry Omonisaye as Vicar General.

We wish our confreres a service that is rooted and audacious, grounded and fruitful. May the Spirit of the Lord, who is upon them today, enable them to live in communion and accompany them throughout their journey.