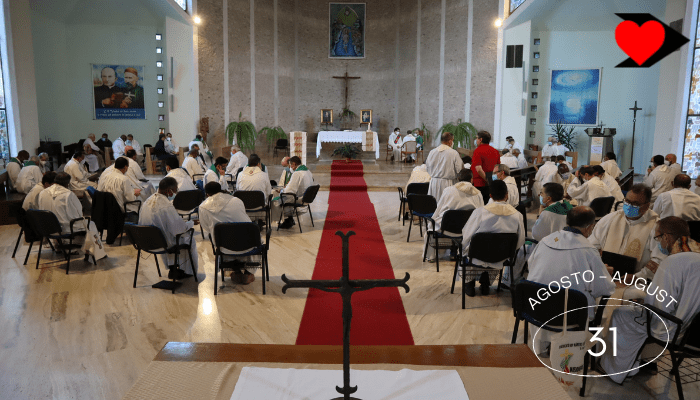 Nemi, Italy. August 31, 2021. The first Chapter meeting of this last day of August took place around the altar of the Lord. Juan Carlos Bartra, Provincial of Peru-Bolivia, presided and asked us to pray for all the communities of the Congregation. Each one of them is an apostolic cell, a small domestic Church, where the Gospel becomes life and mission.

From praying for the communities present throughout the world, we moved on to discernment on the organization and profile of the new government team, which, in collaboration with Fr. Mathew Vattamattam, will lead the Congregation for the next six years. In the chapter hall, after listening to the organizational proposal presented by our newly elected Superior General, voices from all continents resounded. The words of the past few days have taken on a new color. The time has come for dreams to begin to take shape; and, as we have been doing since the Chapter began, a double conversation has channeled all the energy.

The first dialogue took place in the Chapter Hall; in a rich exchange of ideas and suggestions, in which the capitulars accepted the proposal for a structure of government very similar to that of the previous six-year term. Secondly, we went to the chapel where we had confidential conversations in groups of four. It was a matter of helping each other to discern who were the most suitable people to form the government team. The fruit of the morning’s work was reflected in the preparation of the consultation or survey, with the names of the general consultants and prefectures.

The afternoon session, moderated by Fr. Rosendo Urrabazo, focused on matters of a juridical nature, regarding the criteria for the constitution of provinces and delegations, as well as the representation of the major organisms in the General Chapter. Despite the complexity of the subject, the moderator’s good work ensured that all the questions were clarified and dealt with the required competence, reaching satisfactory agreements for all. The Chapter did an excellent job as a team.

We closed the day interceding in prayer for the Province of Peru-Bolivia and thanking them for their missionary work. Tomorrow we have the “election day”, the day dedicated to the election of the General Consultors. We count on your prayers.