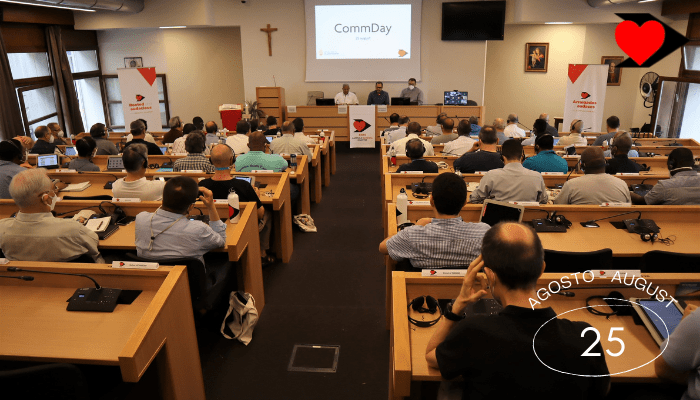 Nemi, Italy. August 25, 2021. Ten days have passed since the beginning of our General Chapter. The journey continues and we continue to share together what we consider most relevant to the life and mission of our Congregation today. If yesterday we focused on all the work developed around the issues of justice, peace, and integrity of creation, today we dedicate our time to governance and communications.

The day began, as usual, around the double table of Bread and the Word. The brothers of the Province of Centroamérica animated the liturgy, recalling first of all the anniversary of the foundation of the Claretian Missionary Sisters and congratulating their current Superior General, Jolanta Kafka, who continues to accompany our assembly as facilitator. The Gospel invites us to combine the proclamation of the Good News with the denunciation of unjust structures that prevent the flourishing of the Kingdom of God among us. In tune with this Gospel call, the rest of the day we addressed the communicative dimension of our governance and our mission.

To govern is also to communicate, and good communication is good for government and, in general, for the mission: this was repeated on several occasions during the various interventions that punctuated our work. On the one hand, the Claretians members of the recently created communication office of the General Curia have guided this work, Br. Mario Kevin Armijo, Fr. Joseph Ikemefuna and Deacon Edgar Salgado; on the other hand, Fr. Henry Omonisaye, liaison of said office with the entire General Government; likewise, Fr. José Enrique García Rizo, cmf, a student at the Faculty of Institutional Social Communication of the Pontifical University of the Holy Cross (Rome), and, finally, two specialists in the field, Professor José María La Porte, a professor at the same university, and Salesian Father Javier Valiente, current assistant director of the weekly program El Día del Señor (The Day of the Lord) on Televisión Española. Through small conferences, workshops and shared good practices (among them it is worth mentioning the contributions of the provinces of Brazil and USA-Canada and the joint work of the youth and the Claretian Family of MICLA with the support of Fr. Julio Daniel Arváez, cmf, of the province of Centroamérica), all of them have shown how is the world in which we live and how to channel our desire to communicate in it and with it in the best possible way, making transparent our evangelizing identity at all levels.

In this context, Fr. Carlos Sanchez Miranda, cmf presented to the capitulars the film Claret, seen the night before, highlighting the objectives of this initiative, how it has been carried out and what would be the keys from which to properly interpret the final product. Both the director of the feature film, Pablo Moreno, and the Claretians who have watched over the project, emphasize that, although rigorous, the film has not been conceived as a historical documentary but as a way of presenting the figure of St. Anthony Mary Claret today, with a symbolic, artistic, and universal perspective, so that our founder may be known and questioning throughout the world at this point of the 21st century.

All that was thought, worked, and discussed during the day was converted into song and prayer in the evening. Inspired by some numbers of the encyclical Fratelli tutti and united to the woman who proclaims through the centuries the greatness of the Lord, blessed communicator of the name of Jesus, we put our voice at the service of the Lord. We want her proclamation to resound in every village of the earth, so that all together we may one day rejoice in God, our Savior.