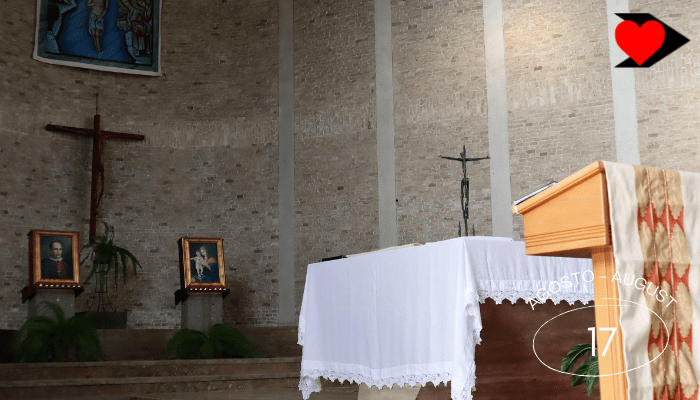 Nemi, Italy. August 17, 2021. The Word tore the silence, ordered the chaos, inhabited the world. It became flesh of our flesh. It was broken and shared as daily bread. And his Kingdom has been spreading through the centuries. Also among us. This is what we have been able to remember and relive throughout this second day of retreat as a chapter community.

In an atmosphere of silence that has lasted throughout the day, the Word has been resounding in us and among us. Like beads of the rosary that pass through the fingers and soothe the heart, five texts of Scripture very significant for St. Anthony Mary Claret have brought us closer to the voice and message of the Lord: “You, Israel, my servant; Jacob, whom I have chosen” (Is 41:8-10), “I have made you a watchman for the people” (Ex 33:1-9), “Come to me, all you who are weary and burdened” (Mt 11:28-30), “What does it profit a man if he gains the world and loses his soul” (Mt 16:24-27), “The Spirit of God is upon me because he has anointed me” (Lk 4:16-19). We have given time to the Word and the Word, who is the living Christ, has given us a glimpse of the eternity to which we are called. In the secret of each one’s heart and in what we express together as a praying community, the Lord Jesus has made himself present. And, like the two disciples on the road to Emmaus, we were surprised to find ourselves conversing with the Friend along the way. The Lectio Divina shared in small groups at the end of the morning was strikingly similar to that paschal path….

The path led us home; the word led us to the banquet. And we recognized Him without veils in the breaking of the bread. Around the mystery of the Eucharist our Founder found the maturity of his experience of faith: we, seated at his table, seek, and savor the Eucharistic root of our spirituality. And we want to continue discovering the missionary light that is projected from it on the world. Fr. Gonzalo Fernandez, current Prefect of Spirituality of the Congregation, who presided the Eucharist inviting us to recreate the icon of Emmaus in our communities as the best way to face the challenges of our time; Fr. Carlos Sánchez Miranda, director of the Center of Claretian Spirituality of Vic, which does not seek to rescue the past to anchor itself in it, but to rediscover the inheritance received as a spur for our own missionary being, and Fr. Paulson Veliyannoor, in charge of the Centro Fragua of Los Negrales (Madrid), which for decades has offered an experience of integral renewal for the Claretians from all over the world with more than twenty-five years of perpetual profession.

As the day falls there is a serene air among us. We know that, although we try every day to walk like them, we still have a long way to go to match our steps with those of the pilgrims to Emmaus, who, at first disenchanted with the following of Jesus, eventually regained his friendship. Our calling, as St. Augustine reminded his followers on the feast of the first martyr of the faith, consists in continually passing from servant to friend: “Stephen, from servant, became a friend. We are undoubtedly servants; grant that we may also be friends” (St. Augustine, Sermon 316). A desire that is, in reality, a promise, because the Lord has gone ahead with his dedication to ours, staying with us in all the cares of life. Thus, we Claretian Missionaries can also become today friends who stay with the Friend, with the One who, once seated at the table, already remains there forever.