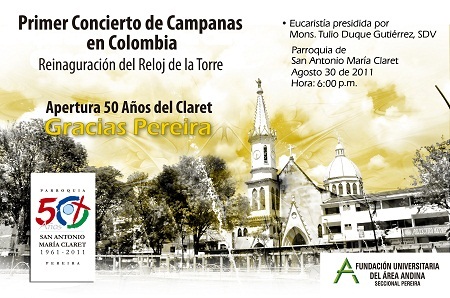 The Claretians came to Pereira in 1917, invited by Bishop Don Nacianceno Hoyos, to exercise their ministry at the Cathedral dedicated to “Our Lady of the Poor”. Later on, it became known as the foundation of the Claret Institute (1929) and the “Claretian Seminary”.

The missionary work took on special significance in its attention to rural chapels, as a patron of the arts and good works, its support of the St. Vincent de Paul Society in its care of invalids, the San Miguel press, the circulating library of the Heart of Mary, and the erection of the new cemetery of St. Camillus (1931). For youth who had gone astray it founded the “Casa de la Joven” which later was taken over by the Adoratrices Sisters. It also stood out in its support of the construction of the Matecaña airport through the initiative of Fr. Punset.

Thanks to a donation, the missionaries began the construction of the Church of St. Anthony Mary Claret, known as the “Church of Miracles” in 1947, and later inaugurated in 1952. On August 22, 1961 it was designated a Parish.

To open the festivities, the Parish has organized a concert of the tower bells and the reinauguration of the clock tower to coincide with the 148th anniversary of the city of Pereira. The official celebration will take placed in October together with the fiesta of the patron saints.