50th Anniversary of the Claretian Presence in The Congo 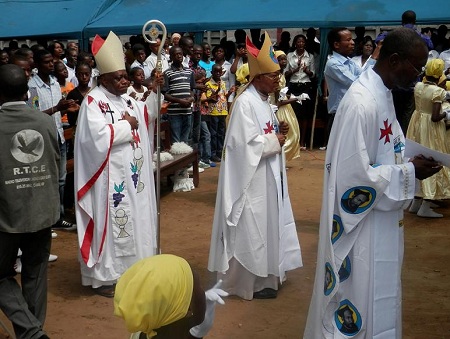 Kinshasa, R.D. Congo. This year, 2102, the Claretian Missionaries of the Delegation of the Congo has completed 50 years of the presence of the Congregation in this country.

La The celebration of this graced event developed through two events:

– On the 7th of October 2012 in Kikwit with a mass celebrated at the Parish of St. Ignatius of Massamba by Fr. Gilbert Mbambi, SJ, Pontifical Commissioner of the Congregation of the Brothers of St. Joseph of Kinzmabi, sent by Bishop María-Edouard Mununu, OCSO.

– On the 14th of October 2012 in Kinshasa with a Eucharist celebrated at the Parish of St. Ignatius of Ciré-Verte by Mons. Daniel Landu, Bishop of the Diocese of Matadi, accompanied by Mons. Joachim Mbadu, Bishop Emeritus of Boma in the D. R. of Congo.

Testimony to the historical unity between the Province of Germany and the Delegation of the Congo was highlighted by the attendance at these celebrations by Fathers Stefan Wolf, CMF, Provincial Superior of Germany, Ricahrd Ströbele, CMF, one of the pioneers of the implementation of the Congregation in the Congo, and Franz Winkler, CMF, the last German Claretian working in the Congo. In addition also attending were Mrs. Lore Maria Ströblele and Mrs. Renate Paula Medwed, benefactors from Germany.

The presence of Fathers Joseph Engonga, Prefect of the Apostolate of Equitorial-Guinea and Octave Soh Fonkou, representing the new Delegation of Cameroon, were also a sign of the Claretian fraternity promoted in Africa.

The celebration of this golden jubilee opens the prospects of a new missionary responsibility for the rooting of the Claretian charism in the Congo and for the promotion of the New Evangelization in the center of Africa, according to the apostolic style of St. Anthony Mary Claret. Kinshasa, Democratic Republic of the Congo. On June 7, 2022, during the 5th Delegation Assembly, the Claretian Missionaries of Congo received the newly appointed Delegation Government for 2022–2025. And they are as follows: Major Superior: Fr. Jean-Baptiste Makilandi,...