50th National Week for Institutes of Consecrated Life: Consecrated persons, a gift of life in the Church and in the social fabric 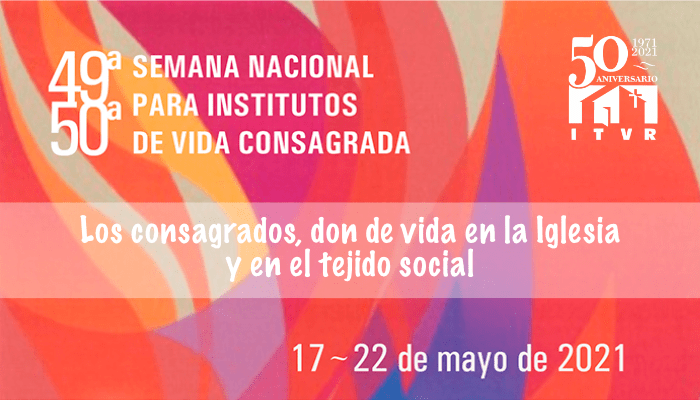 Madrid, Spain. Those National Weeks for Institutes of Consecrated Life that in previous years preceded the one celebrated this year were marked by various ecclesial events, such as the Year of Consecrated Life, the Year of Mercy or the Synod of Youth. We could remember with special affection the presence of Cardinal Luis Antonio Tagle in 2015. Or the visit of Cardinal Philippe Barbarin, both men of extraordinary personality, with a universal ecclesial vision and a high theological formation.

This year, the traditional meeting for religious in Spain, organized by the Theological Institute of Religious Life (ITVR) had a double impulse, ad intra and ad extra. The first was to look back with gratitude on these first fifty years of the Institute’s life, a golden jubilee that invited us to remember that the doors of the ITVR have always remained open for research, dialogue and mutual support in the following of Jesus and the proclamation of his Kingdom’s Gospel. The second revolved around the missionary urgency of a consecrated life that moves, witnesses and works in the midst of society, contributing in a decisive way to the construction of the common good. Also, in the face of the coronavirus. Interdependence and solidarity have become more present and indispensable than ever.

The covid-19 crisis has taught us that being community means being permanently united in ecclesial communion for the life of the world. And it was under these parameters that the 50th National Week for Institutes of Consecrated Life was planned, which took place from May 17-22, in the days leading up to Pentecost. Six days of enlightening reflections and solid formation, retransmitted for the first time one hundred percent online, and that counted with the word and closeness of, among others, Pope Francis, Cardinals João Braz de Aviz, Cristóbal López Romero, or Aquilino Bocos Merino, and also of other Claretian missionaries of accredited academic soundness and ample teaching experience, such as Gonzalo Fernández Sanz, José María Vegas or Manuel Jesús Arroba Conde.

The program, therefore, is structured around a proposal that is hard to beat: ‘Consecrated for the life of the world’. In the words of the director of the ITVR, Dr. AntonioBellellaCardiel, organizer of these days, “with these days we want to offer a small provocation: consecrated by, in and for the world and the life of the world”, because “our way of life, our orders and congregations are not outside society”.

Indeed, consecrated persons move and work in the midst of society and to reflect on this call to be an evangelical leaven for the world, the first and the last day of conferences were reserved. Luis Ángel de las Heras, Bishop of León and Claretian religious, contributed with a talk entitled ‘Consecrated life at the pace of the People of God’. Gonzalo Fernández Sanz,CMF, General Prefect of Spirituality, focused on the need for greater spiritual depth to continue being a word of service, authenticity and witness. Marta García, professor at the University of Comillas, stressed the prophetic dimension. “That is why consecrated life cannot live in fear. If it did, it would be allowing the truth to be imprisoned in lies”.

Consecrated life in the social fabric

In between, during the days of Tuesday, Wednesday, Thursday and Friday, consecrated life was confronted with the social fabric from the realities where religious want to continue to be present. From North and South America, religious Liliana Franco and Teresa Maya, who offered a panel together with Xiskya Valladares, spoke about religious life as a house of care and networking. That same day, in the mission that this Claretian province has in Russia, Fr. Vegas offered his conference on the values on which our post-modern societies are based. In order to rethink the assistance work of the Church in its tasks of caring, healing and teaching, there were voices such as those of Jesuit Alberto Ares, of the Jesuit Migrant Service, Pedro José Huerta Nuño, Secretary General of Catholic Schools or Sister Carmen Mora, Superior General of the Sisters of Charity of Saint Anne. Also speaking about the peripheries was Card. Cristóbal López Romero, from Morocco. His talk was based on his testimony and experience as a Salesian religious. “Evangelization is, before anything else, a question of testimony. “Through a testimony without words, irresistible questions are also raised. Evangelization is not a matter of lip service, of microphone and loudspeaker. It is a matter of life,” he urged.

Manuel Jesús Arroba Conde, CMF, Dean of the John Paul II Theological Institute of Madrid, was the keynote speaker. And as it has been usual in the last editions of the Religious Life Week, a space was opened for other forms of consecration. Specifically, Wednesday was a day dedicated to ‘consecrated secularity’ with interventions such as that of the president of CEDIS, María José Castejón Giner, and the subsequent colloquium between Lucio Arnaiz, responsible for the priests of Prado, Margarita Saldaña, of the Little Sisters of the Sacred Heart of Charles de Foucauld, and Sister Teresa Rodríguez, of the Missionary Fraternity Verbum Dei.

To close these days of reflection and meeting, which were attended by more than two thousand consecrated men and women from the five continents, Cardinals Bocos and Osoro took the floor. The latter, also Archbishop of Madrid, did so with an approachable speech and a pastoral zeal in keeping with the exercise of his ministry, since he began six years ago in this diocese with a special affection for consecrated life in general and for the Institute in particular. Finally, Cardinal Bocos Merino summarized that “these days have shown that consecrated life is a living reality that walks together with the People of God”. He added: “Consecrated life is pure miracle and has a future because it is the work of the Spirit. No one can legitimize it by human effort”. Finally, the missionary Antonio Bellella, on behalf of the ITVR, concluded: “Those who know consecrated life from the inside cannot deny some evidences that point to the fact that something new is being born and that in this Week it has found a space to be witnessed”.

With a large team of people

This edition of the Week, the first online, was no exception. The visible was made possible by the invisible, something that the participants have been praising and thanking for decades. A dozen or so professors from the Institute and its sister school (Regina Apostolorum) took the floor as moderators and presenters. A large team of people, lay and religious, worked to ensure the smooth technical functioning of the broadcasts and their presentation to the media. Several hundred people enriched the discussions and reflections with their online comments and not a few supported them with their prayers, which was also a very important element in each of the sessions. The music group Ain Karen, linked to the Vedruna family and an example of inter-congregational collaboration, also contributed to the success of the week, followed for the first time, thanks to technology, from the five continents.

As so often happens in the university world, the closing of the 50th National Week for Institutes of Consecrated Life marked the beginning of its fifty-first edition. Let’s keep on enjoying the journey!