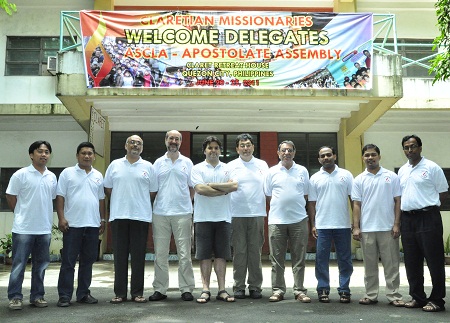 Fr. Leo Dalmao, CMF, Provincial Superior of the Philippine Province, officially welcomed the delegates during the first day of the meeting. A review of the document Missionary Plan for Asia 2005 was presented by Fr. Angel Calvo, CMF, the Philippine Province’s delegate to the 2005 ASCLA Apostolate Encounter in Korea, to review the thrust of the Claretian evangelization in Asia. Delegates from different ASCLA East countries also presented an update on the present missionary activities of each organism.

After looking into the various trends, socio-political realities and challenges that affect the countries of East Asia today, the assembly worked on the different proposals and missionary activities that will be a collaborative effort of ASCLA East, following the four priorities of mission namely: Bible Pastoral; Information Technology; Justice, Peace and Integrity of Creation (JPIC) and Interreligious Dialogue; and Youth and Vocation Ministry.

In the end, the assembly came out with concrete proposals corresponding with each missionary priority for better collaboration. Proposals will then be presented to the major superiors of ASCLA East.

A day before the conclusion of the meeting, the participants visited some of the apostolate areas of the Claretians which include the Basic Ecclesial Communities in Quezon City and the relocation site in Montalban. That day concluded with a Solidarity Night held at St. Anthony Mary Claret College Seminary with cultural presentations coming from the different Claretian communities and institutions.