Cardinal Braz de Aviz at the Presentation of the Book of Fr. Aquilino Bocos 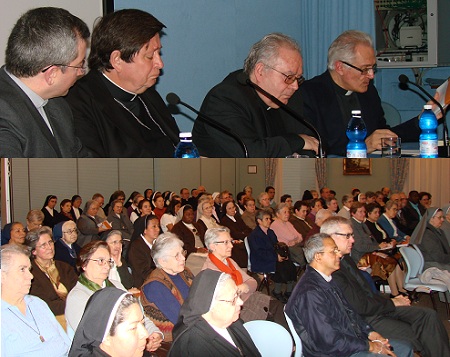 Rome. The great hall of the Claretianum was the setting of the anticipated celebration of the World Day of Consecrated Life. The IX Encounter took place of February 1st for Spanish speaking religious men and women organized by “Claretian Publications of Madrid” and the Institute of Consecrated Life, the “Claretianum”.

Among those attending were numerous religious men and women from different congregations, institutes, nationalities. Among them, numerous Superiors Generals, members of General governments and internationally well-known figures of religious life. Card. Joao Braz de Aviz, Prefect of the Congregation for Institutes of Consecrated Life and Societies of Apostolic Life (CIVCSVA) presided over this simple and fraternal gathering, having as background the “Year of Faith” and the commemoration of the 50th anniversary of the start of the Second Vatican Council.

After the welcome to the Institute given by Fr. Javier Larrañaga, CMF. director of Claretian Publications, Fr. Fernando Prado, CMF introduced the Act. Following, Cardinal Braz de Aviz took the podium in a simple and deep tone of voice, thanking the magazine for the organization of this Encounter and for their work at the service of Consecrated Life. At the same time he invited those present to celebrate this day with joy.

Taking the floor, Fr. Aquilino gave a tour of the fundamental approach of the book, whose Italian and French editions will come to light in the next few days. It is a timely and imperative work which helps us to better understand the journey of the consecrated life in the postconciliar era. It is now becoming a international reference work

The book makes analysis but does not just remain there. It is an authentic reading, believer of lived history that is projected into the future with hope. Consecrated life, said Fr. Aquilino, must get used to looking into the future. An open future continuing to being touched by the spirit.